Everything is big in Texas.


The geography of the state.

The number of people.

The attitude of the people.

The size of the interstate interchanges.

I have been in Texas this week with limited time to write but I had to pass on some interesting stats that I came across in a suburban Houston newspaper which support those statements.

There were only two metro areas in the entire United States in the 2013-2014 time period that added more than 100,000 in population.

They were Houston and Dallas-Fort Worth.

The Lone Star State also had four metro areas among the nation's 20 fastest growing in population by the rate of population change---Austin (3rd), Odessa (4th), Midland (9th) and Houston (11th).

Of course, that population growth has been driven by the economy. People have been moving to Texas for jobs.

Texas added 458,000 jobs during 2014 according to this report by Pew. That was a 4% increase in jobs in percentage terms. Only North Dakota had higher percentage job growth at 5.42%.

Of course, no other state matched Texas in the absolute number of jobs created. By comparison, the percentage leader North Dakota, only added 25,000 jobs for its 5.42% job growth.

Population and job growth also drive further economic growth.  An estimated 3.71 million square feet of new retail shopping center space will be built and opened in Greater Houston this year.
That is a 57% increase from 2014 retail shopping growth.

What does that mean in terms that are easier to understand? 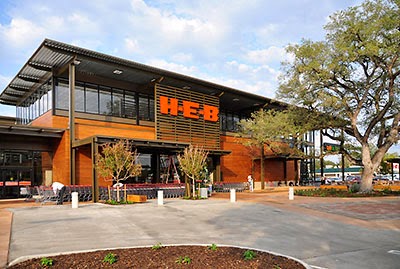 I-10 West of Houston near Gessner Road and Beltway 8 now spans 26 lanes across---the widest highway in Texas (and the world according to this story).

327,000 vehicles traverse that stretch of highway every day.

A little west of that area, in the so-called Energy Corridor, cranes fill the sky as additional office space continues to go up and a substantial number of luxury apartments are being built.

A large part of all this growth can be traced back to the energy sector. Now that oil prices have fallen, will the Houston (and Texas) economy falter as well?

I was in Austin this week as well and you see much of the same building boom in that city which is not known for its same close connection to the energy economy.  State government, education and technology are big factors in that economy.

This was the view from my 21st floor hotel room in Austin. It is amazing the amount of construction that has taken place in downtown Austin the last few years. A lot of has been high residential and big hotels. 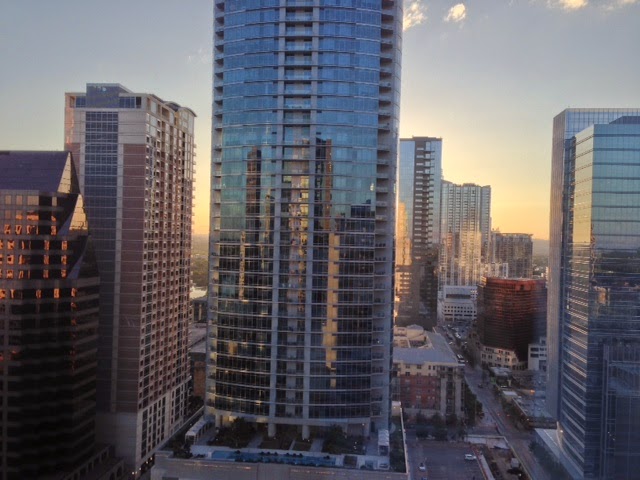 I stayed in the JW Marriott that just opened two months ago. It has 1,012 rooms making it one of the larger hotels in the country. The building in the center of the picture is the Austonian which is a 56 story condo---the tallest residential building west of the Mississippi. The 360 Condominiums is in the background to the right of the Austonian. It has 44 floors.

All seven of the tallest buildings in Austin (all at least 30 stories tall) have been built since 2004.

Big oil has had a lot to do with the growth of the Texas economy. However, you cannot discount the effect that the tax structure (no personal income tax), a favorable business climate (fewer regulations) and sensible state spending (48th out of 50 states in per capita state spending) have had in promoting the economic growth that Texas has experienced in recent years.

It will be interesting to see how well the Texas economy can withstand lower oil prices. My guess is that they will feel some pain but it is much better positioned to deal with the effects of a slowdown in the oil patch than it was in the 1980's.