What Is A Fair Tax?

I recently came across a paper on "Fairness and Tax Policy" that was prepared by the staff of the Joint Committee on Taxation that provides data on the current and historical distribution of income and taxes in the United States.

Fairness is an elusive concept that means different things to different people. One's view of fairness has a lot to do with an individual's perspective.

If you have something that I don't have, I see that as unfair.

However, if I worked hard for something and you did nothing, it seems imminently fair to me to not share anything with you.

Then again, if you were unable to contribute because of an infirmity or disability, I might consider it fair to share some of my hard work and good fortune with you.

When it comes to taxation, two broad principles of fairness have generally been recognized over time by economists and political philosophers.

The Benefit Principle-taxes are levied in relationship to the benefits received by government. The gasoline tax is an example of this. The more you drive, the more you use in gasoline, the more you pay in taxes to assist in supporting highway construction and maintenance.

The Ability to Pay Principle-taxes are levied on those with the greatest ability to pay. The income tax is the most obvious example. However, sales taxes are also based on this principle with the ability to pay being based on a measure of spending rather than income.

Let's look at "Ability to Pay" under the federal income tax system based on the distribution or income and taxes (and average tax rates) for the 2015 tax year as estimated by the Staff of the Joint Committee on Taxation. 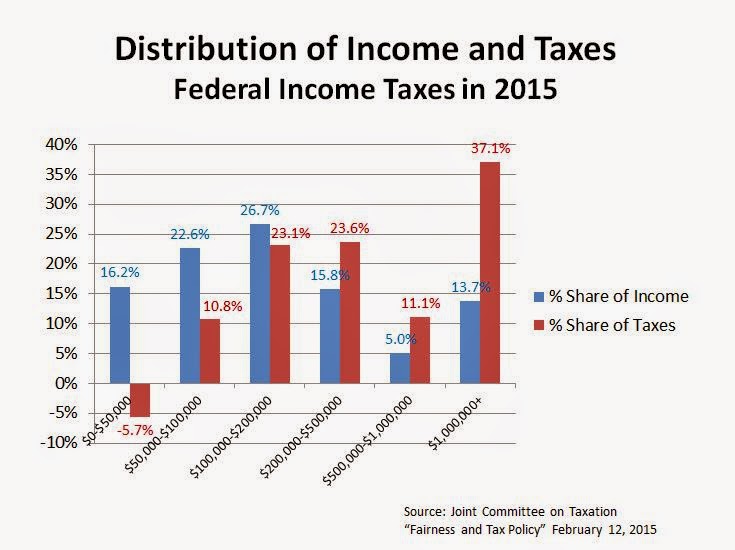 A few observations about the data.

All I know is that you probably think you paid too much or your refund was not big enough this year.

Your view is influenced first and foremost by you.

If you are one of the 20% of all taxpayers who are paying 88% of the total income tax burden, I feel your pain.

If you are one of the 80% who is carrying the other 12% of the total tax burden, you might want to consider the facts above. And say thanks to someone who makes a little more hay.