Blue States In The Red

Dark days appear to be ahead for many states, their pensioners and taxpayers, if you look at the most recent funding level of state pension funds.

These pension plans typically provide the main source of retirement income for state workers, public school teachers and university personnel. In most states, public safety personnel such as police and fire also participate. Big cities, like Los Angeles or Chicago, typically have their own pension plans and are not in the state plans.

According to the latest data compiled by Bloomberg, five states are on "Code Red" status due to pension funding levels that are less than 50%---New Jersey, Kentucky, Illinois Connecticut and Colorado. 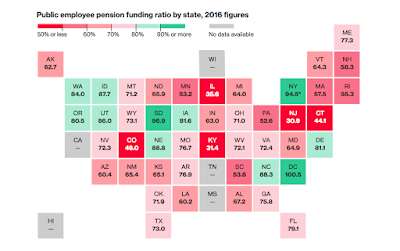 New Jersey and Kentucky are only 31% funded.

Here are the states with the ten worst pension funded ratios according to the Bloomberg report.

All of these ten states saw their funded ratios fall in 2016 despite the fact that the S&P 500 increased nearly 10% during the year. The long term bond index was also positive for the year. These states have reached the point that payments to those currently on pensions are draining the assets to such a degree that it is becoming next to impossible to catch up.

How does it get this bad you might ask?

Connecticut is a case in point.

Connecticut is the richest state in the union. It has the highest per capita income. One of the reasons that Connecticut was able to attain that status was that until 1991 it did not have an income tax. As a result, it attracted many Fortune 500 companies and investment managers from higher-tax neighboring states in the 1970's and 1980's.

You would think that all of that wealth and all of the added income tax revenues would have put Connecticut on a firm financial footing.

Aaron Short explains the root of the problem in his article in The Daily Beast, "Why Connecticut is Collapsing".

"... the most frustrating thing about Connecticut’s struggles are that they never had to occur.

“A lot of what is going on now could have been predicted 30 years ago,” said state Comptroller Kevin Lembo. “Revenue was flowing into state coffers but politicians never did the hard work to make sure the retirement system was funded. They did the opposite and had them underfunded.”

For 80 years the state failed to properly save for the cost of pensions promised to its public employees and teachers. Its spendthrift decisions led then-Gov. Lowell Weicker to enact a state income tax in 1991.

Soon buckets of revenues from the new tax and from the state’s passage of legalized casino gambling began to flow into state coffers. State’s leaders went on a spending spree.


We see this played out over and over in government spending. Whatever they have seems to never be enough.

Calls for more taxes end up with more calls for even more more taxes.

It is a condition that is endemic to the political class---Democrat or Republican. Connecticut reached this point by mismanagement by both parties.

However, there seems to be some evidence that you have a better chance tof staying out of the red in a red state.

This graphic compares the overall fiscal status of each state with how they voted in the most recent Presidential election.