The Art of the Deal

I read Donald Trump's book, The Art of the Deal, almost 30 years ago.


Trump's thinking and traits have not changed much in 30 years. Most people don't. What they were at 40 is what they are at 70.

Here are a few negotiating tactics that Trump wrote about in The Art of the Deal and some quotes from the book that were compiled by Peter Economy in Inc. magazine.

"I like thinking big. I always have. To me it's very simple: if you're going to be thinking anyway, you might as well think big."

2. Protect the downside and the upside will take care of itself

"I always go into the deal anticipating the worst. If you plan for the worst--if you can live with the worst--the good will always take care of itself."

"I never get too attached to one deal or one approach...I keep a lot of balls in the air, because most deals fall out, no matter how promising they seem at first."

"I like to think that I have that instinct. That's why I don't hire a lot of number-crunchers, and I don't trust fancy marketing surveys. I do my own surveys and draw my own conclusions."

"The worst thing you can possibly do in a deal is seem desperate to make it. That makes the other guy smell blood, and then you're dead."

"One thing I've learned about the press is that they're always hungry for a good story, and the more sensational the better...The point is that if you are a little different, a little outrageous, or if you do things that are bold or controversial, the press is going to write about you."

"In most cases I'm very easy to get along with. I'm very good to people who are good to me. But when people treat me badly or unfairly or try to take advantage of me, my general attitude, all my life, has been to fight back very hard."


If you read through these quotes you see the same Trump today as he was in 1987.

Thinking big. He's President isn't he? How many thought that was possible when he started?

Never getting attached to one deal or one approach.

Knowing your market. In this case, his base of voters.

Enhance your location. What better location or podium than to negotiate from than 1600 Pennsylvania Avenue?

Getting the word out. Now you know why he uses Twitter.

Fighting back.  No need to give any examples here. We see it every day. Trump takes nothing lying down.

The one tactic that I think Trump has yet to fully embrace as President is his use of leverage. He seems overly cautious to me. Perhaps it has to do with Rule #2 above---he is trying to protect his downside and does not want to antagonize Congress unnecessarily. After all, he needs them over the longer term if he is to be a successful President.

I get it. However, I think he is missing some great opportunities.

I previously wrote that I thought Trump should be applying leverage on Congress to get something done to repeal and replace Obamacare.  It would be easily done by simply ending the Obama administration executive order that is allowing Congress to avoid having to get their health insurance through the individual Obamacare exchanges. This is clearly not allowed under the law as written.

Trump could end it with a stroke of the pen. He has the leverage and it could be useful in getting Congress to get something done to repeal and replace Obamacare.

The same goes for DACA.

Trump announced this week that he is ending this illegal executive order of President Obama that effectively grants amnesty to almost 1 million children of illegal immigrants. However, he is delaying rescission of his order for six months to allow Congress time to change the law if it wishes.

For perspective, for those who are now criticizing Trump for his action regarding DACA let us not forget these words of President Obama when he pulled out his pen and enacted DACA..

"This is not a path to citizenship. It’s not a permanent fix. This is a temporary stopgap measure..."

That was over five years ago. That is an awfully long stopgap measure. We also know how that policy caused our southern border to be over-run with thousands upon thousands of minor children (many unaccompanied) thinking they were getting a free pass into the United States.

If I were Trump I would make clear that I would not sign any law changing any portion of current immigration law until some basic safeguards were included to insure that we are serious about securing our border and moving towards a common sense immigration policy.

That would start with two items that Trump has already made his position clear about.

1. Funding for a border wall
2. Changes Trump proposed in August about the current rules for legal immigration.

That is the art of a deal. You want something. You need to give something.

You get something only when you have leverage. Trump has leverage. The ironic thing is that he would not have any leverage on the issue of illegal immigration but for the illegal actions of President Obama.

That is why executive orders were not meant for issues like this.

That is why we have laws.

For those who think it is heartless and cruel to rescind Obama's illegal executive order of DACA, take a minute a consider this perspective that I saw on the Twitter feed of David Horowitz referencing an article on the issue from the Conservative Review. 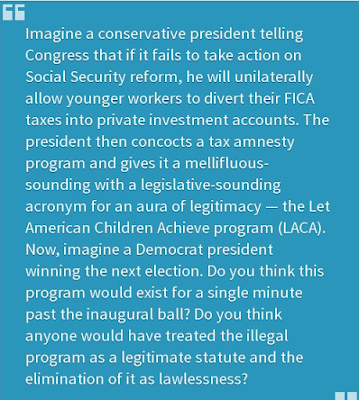 I have found that there is nothing better to evaluate your thinking than to consider "the opposite". There is a reason we have a Constitution and the President swears an oath to follow the rule of law. Those that think DACA is wise, consider the opposite.

And consider the leverage that the occupant of The White House has on this and other issues.

I found this ABC News report on DACA interesting. DACA is supposed to be about young "dreamers." However, it appears that there are hardly any "dreamers" from any other country in the world except Mexico and Central America. 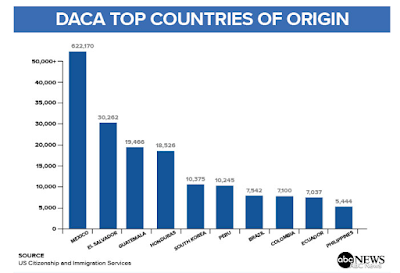 There are none from any Western European country.

None from any African country.

None from Japan or China. There are only 3,800 from India.

Over 600,000 of the nearly 800,000 registered undocumented illegals under DACA came from Mexico.

How is that "fair" to use a liberal term?

This is the problem when the law is not followed and enforced.