Kicking The Can In Kentucky

In my last blog post I highlighted the enormous unfunded public sector pension liabilities in the United States.

Only a handful of states have anything close to what they need to meet the promises made to state workers.

A few are in  "Code Red" status. It appears to be simply impossible for them to meet their obligations. Major changes will have to be made in these plans for there to be any hope that these pensions plans will not totally collapse at some point in the future. You can also be sure that large tax increases in these states are a near certainty as part of any solution.

Let's look at one of the "Code Red" states in particular---Kentucky.

Kentucky's state pension plans are a mere 31% funded according to the Bloomberg report referenced in my last blog.

The worst funded plan within all of Kentucky state plans is the so-called KERS-NH plan that covers state employees in non-hazardous positions.

It is only 16% funded. $13 billion in liabilities for promised pensions with only $2 billion in assets.

Kentucky recently hired an outside pension consultant to assess the situation and recommend steps that needed to be taken.

This is chart from the report of that consultant (PFM Group) that shows how close this pension plan is to total insolvency based on current practices. This chart also assumes that current employees will earn no further pension credits through any future wage growth. This clearly is a realistic assumption. 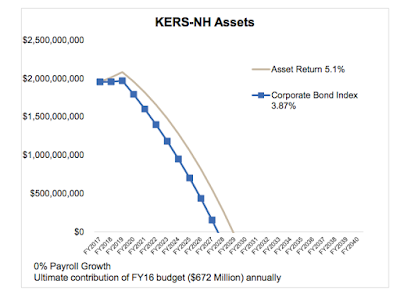 The projection is that this pension fund will have no assets at all in about ten years based on current assumptions. No assets means there is no money to pay anybody a pension who is a participant in this plan. Zero. Nada. Zip.

How do you save a pension plan that is in this kind of shape?

It requires drastic actions. Simply closing the plan to new participants does not come close to solving the problem when it is this bad and this late in the game.

Politicians do not like to make tough decisions. It is always better for them after the next election. However, the responsibility to fix this mess falls on the Kentucky legislature. Delaying or deferring action will only make the problem even worse.

This is what the consultant had to say about that.

“This is the time to act,” said Michael Nadol of PFM. “This is not the time to craft a solution that kicks the can down the road.”

“All of the unfunded liability that the commonwealth now faces is associated with folks that are already on board or already retired,” he said. “Modifying benefits for future hires only helps you stop the hole from getting deeper, it doesn’t help you climb up and out on to more solid footing going forward.”


What are the actions that are recommended?

1. Freeze the pension benefits of most current state and local workers. All of those workers would then be shifted to a 401(k)-style investment plan that offers defined employer contributions rather than a defined retirement benefit.

2. Increase the retirement age to 65 for most state workers.

However, even with freezing and rolling back the pension payments as recommended above, Kentucky would still need to find an extra $1 billion per year in additional pension funding to keep the state pension plans afloat.

This is despite the fact that pension funding has already been crowding out almost everything else in the state budget for the last 10 years as this chart indicates. To obtain $1 billion in additional state funding without a tax increase would require that K-12 school funding be cut by over $500 million per year and spending at most other state agencies would need to be cut by 17% to make up the difference according to State Budget Director John Chilton.

In the wake of the consultant's report and the publicity that has surrounded it, Kentucky is now starting to see a mass of state worker retirements. These people apparently believe they can beat the clock on any changes. It is reminiscent of a run on the bank in the 1930's.  However, the reality is that these actions will only hasten the deterioration of these plans. More money will go out the doors every month. The problem will only get worse.

Predictably, the public sector unions are not happy with the recommendations and will surely put up a fight as the Kentucky legislature considers what to do about the massively underfunded state pension plans.

You can be sure that kicking the can down the road is the preferred option. However, Kentucky has already done that one too many times before.

There is almost nothing left to kick. The money will soon be gone and those state employees will learn too late that their pension plan was not much different than a Ponzi scheme perpetrated on them by their elected officials. All they will get is a gigantic kick in the pants.

Coming soon to a state near you?