Investment manager Peter Lynch became famous in the late 1970's through the decade of the 1980's managing Fidelity's Magellan Fund.

Between 1977 and 1990 Lynch averaged a 29.2% annual return for Magellan which was more than double the S&P 500 market index for that period. During his tenure at Magellan its mutual fund assets grew from $18 million to $14 billion.

Peter Lynch used to say that he got some of his best investment ideas by walking around the shopping mall. "If you like the store, chances are that you will love the stock." That was Lynch's way of saying that people should invest in what they know. Start there and learn more about the product and the company. It does not necessarily take investing genius. It just takes tapping in to what you know and following through with some necessary research and due diligence.

Although malls might have been a good place to look for stock ideas in the 1980's that day seems to have passed.

Take a look at this chart that shows the changes in stock market value of some of the biggest names in retail between 2006 and 2016. The malls and shopping centers have not been a good place to shop for stock market winners. 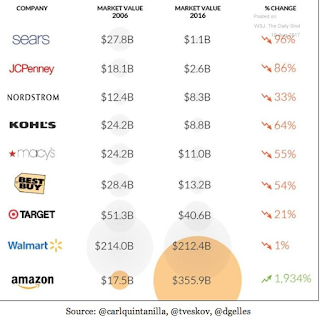 However, what the retail giants have lost in value, Amazon has made up---and more.

The malls might not have been a good place to look for investing ideas the last decade but you could have done pretty well for yourself by just sitting at a computer keyboard or looking at your phone and letting your fingers do the walking for you.

Consider the wealth that has been created in the stock appreciation of just five stocks over the last ten years.

I am certain that all of you were aware of the names of these companies ten years ago. Almost all of you have undoubtedly utilized their products or services in some way. Did you own any of these stocks? 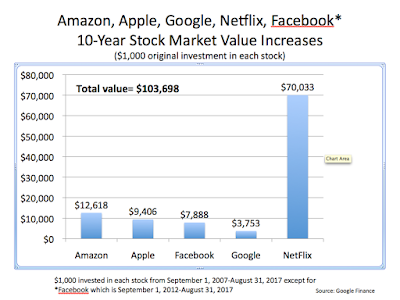 This would have given you an average rate of return of over twice what Peter Lynch was able to produce and for which he became known as the best mutual fund investment manager of his era.

It could have all been done by just letting your fingers doing the walking. There was no reason to even visit the mall.

Investing is easy if you have the know-how.

It is even easier with ten years of hindsight.

If you didn't own these stocks directly I hope you are consistently investing in high quality equity mutual funds. If you are, the odds are you will get your share of winners like these over time. You might not get them for the full run-up but you will still participate in their growth.

The next decade will bring similar winners. I don't know who they will be. However, there will be similar stories in another decade. You can't play if you don't save and put your money to work in order to participate in what the future will provide.

That is the know-how to know how to become wealthy over time.