Streetcars used to be mainstays of transportation in every major American city beginning in the late 19th and early 20th century.

They were an efficient means of transportation when most people lived in cities and most did not have automobiles.

The advent of the automobile, and the development of city bus systems, led to the ultimate demise of streetcars. More people had cars for personal transportation and buses became the preferred method of transit in cities because of lower capital costs and increased flexibility to modify route systems.

You can see how the popularity of public bus transportation exploded after World War I as more and more cities came to rely exclusively on buses. This graph is from an article in City Lab explaining the demise of streetcars as bus transportation took over. 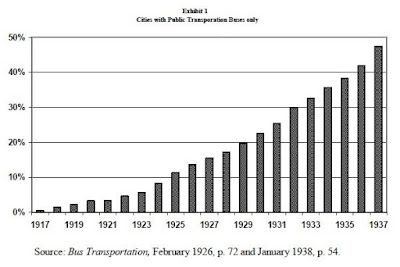 You can also see the slow death of streetcars in this graph from the same article that compares streetcar and bus ridership up to the year 1970. By that time, almost all streetcars were in the scrap heap. The light gray is bus ridership. The dark gray is streetcar ridership. 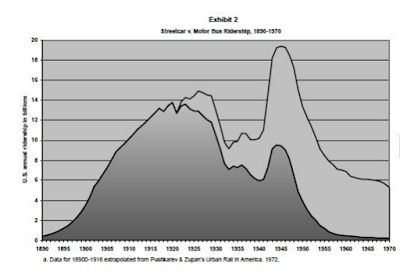 An interesting sidenote in looking at the graph above is the spike in the use of all public transit during World War II. This was clearly the result of gas rationing during the war. However, the end of World War II led to the growth of personal auto usage, urban exodus and the decline in all public transit.

This led to almost all streetcars ending up like this by 1970.

Despite all of this history and experience, liberal politicians in cities around the country have decided that streetcars are "in" again and are the answer to revitalizing urban areas and spurring economic development in their cities.

It is also argued riding a streetcar is considered "cool" by Millennial urban dwellers while riding a bus is decidedly "uncool" as a reason to push for more streetcar projects.

Isn't that a great reason to spend taxpayer money?

Left unanswered is why past streetcar lines were abandoned, bus lines are still operating and cities have grown and changed over the years without those streetcar lines.

Also unanswered is how you can make the economics work without massive subsidies.

The experience of Cincinnati, Ohio is typical.

The Democrat-controlled City Council and Mayor fell in love with the streetcar idea. They moved ahead despite many local objections and the fact the city was already grappling with almost $1 billion in underfunded pension liabilities.

A new Mayor and several city council members were elected on promises to kill the streetcar. When they took office they discovered that the prior administration had signed contracts and spent money such that the city would lose more money by canceling the project than by completing it. As a result, the streetcar project proceeded despite many new city leaders being opposed.

The 3.6 mile streetcar line opened last September at a cost of $148 million (that's over $40 million per mile) with $45 million of that sum coming in the form of federal grants.


How is the streetcar doing?

Ridership is running at barely half of the projected ridership that was relied on when the project was being promoted.

Based on an annual operating budget of over $4 million, revenues from rider fares contributes less than 10% of operating costs ($377,752). The rest is made up from advertising, charitable foundational support, tax incentive support money and city parking revenue that has been directed to fund the streetcar.

Proposed streetcar budget for 2018 as reported in the Cincinnati Enquirer

Ed note: After the above article was published by the Cincinnati Enquirer it was reported that an additional $500,000 in revenue in tax incremental financing payments from properties along the streetcar route can be expected as additional revenue. I assume that is in addition to the $400,000 reported below.


It is so bad that City Council member Amy Murray observed that the costs to collect the streetcar fares were higher than the actual fares collected.

Council member Murray was asked why doesn't the city simply disband operations? The short answer is that it can't unless it repays the $45 million it took in federal grants. This obligates the city to operate the streetcar for the next 25 years according to Murray.

Proponents of the streetcar argue that you cannot look at budgets when assessing streetcars. They argue it is unfair to compare buses to streetcars because buses are able to operate on existing roads for which they effectively ride for free. However, that is exactly the point. The road infrastructure already exists. It would be there even if buses did not exist. That makes bus systems much more economical and flexible (routes can be easily reconfigured for changing demographic and economic patterns) than the high fixed costs and the fixed routes with streetcars.

Of course, those proponents also argue that streetcars are cleaner, greener and quieter than those obnoxious buses. You can't be a legitimate liberal cause unless you touch all of the environmental bases as well.

And don't forget that a Millennial would never want to be caught taking a selfie to post on his or her social media account riding a bus!

Other U.S. cities who have jumped on the streetcar craze or are planning to are Portland, Tacoma, Salt Lake City, Atlanta, Kansas City, Detroit, St. Louis, Milwaukee and Charlotte.

I am a big believer in well-considered mass transit. It makes all the sense in the world when you have well-established routes that have masses of people who travel those routes every day. Developing mass transit on these routes can make travel more efficient, economical and create additional economic development at the same time.

This is clearly not the case with most of these streetcar systems.

As a result, all you have is trolley folly.

And, as is always the case, it is the taxpayers who pay the price for politicians who make foolish and ill-considered choices without regard to the costs or long-term consequences of those decisions.
Posted by BeeLine at 5:00 AM