There is no one that is a bigger fan of Chick-fil-A than me.

I had my first Chick-fil-A in Atlanta back in 1972 when I was just starting law school. At that time I don't think CFA had more than 20 locations. Today CFA has over 2,100 locations.

When I moved to Ohio in 1979, CFA had only one unit in Ohio. It happened to be in the town I moved to. I can honestly say that it was a factor in my decision to take the job offer and move there.

For about 20 years there was a CFA in a food court near where I worked. There were not many days that I did not head that way for lunch. It was hard to justify eating at any other fast food restaurant.

The same goes for Mrs. BeeLine and me today when we travel. If we are stopping for something to eat, it will be at Chick-fil-A.

Every time I eat at Chick-fil-A I marvel at the number of customers in the restaurant and in line at the drive-thru. You typically don't see that traffic at other restaurants.

It all adds up in the sales numbers and CFA is demolishing its competition in average per unit sales.

Here is the 2016 ranking of average sales per unit for the top 50 fast food restaurants in the United States.

CFA is in a class by itself. Average sales per unit are 63% higher than the next closest competitor. The average CFA location is selling almost $2 million more per location that McDonald's.

CFA is tripling the volumes of Wendy's and Burger King. 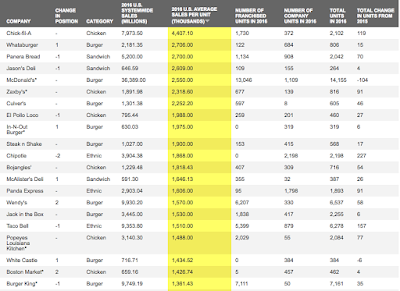 CFA's volumes are even more impressive considering that they are doing it in a 6 day week rather than 7 days.

CFA still has amazing growth potential when you look at other numbers. McDonald's has 7 times the number of U.S locations. Burger King and Wendy's have 3 times the locations. CFA has not scratched the surface of its potential.

I had the good fortune to meet CFA founder Truett Cathy several years before his death.

He looked at me with a grin and quickly responded,

"We are open six. What were you doing on the other day?"

It was my pleasure to meet the man who has set the standard in fast food.