I have looked on in amusement as political pundits, media mavens and some Democrats attempt to criticize President Trump's announcement that the United States of America will begin recognizing Jerusalem as the capital Israel.

Of course, their objective in all of this is to try to make Trump look like an ignorant, out of touch, know-nothing to try to build on their consistent narrative of negativity about the President.

Israel has claimed Jerusalem to be its capital since the nation was founded in 1948. The Jewish people have considered it to be their spiritual capital and home since King David made it the capital of his kingdom in 1003 B.C.

If you think about it, not recognizing Jerusalem as the capital of our ally Israel would be akin to the Great Britain refusing to recognize Washington, D.C. as our capital.

How would we feel if Great Britain had its embassy in Philadelphia? After all, the present day District of Columbia actually sits on land that was once part of the state of Maryland. What if Great Britain did not recognize that annexation to the federal government? (The District actually once encompassed land ceded by both Maryland and Virginia in what was originally a 100 square mile territory. The land that sits west of the Potomac River that once was part of the District was returned to Virginia in the mid 19th Century.)

Here is what the District of Columbia looked like in 1835 before the retrocession of D.C. to Virginia in 1846. 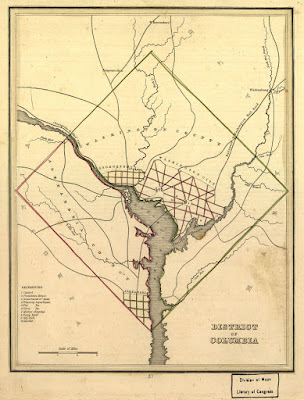 Here are the boundaries today. A perfect diamond-shaped district became something quite different. 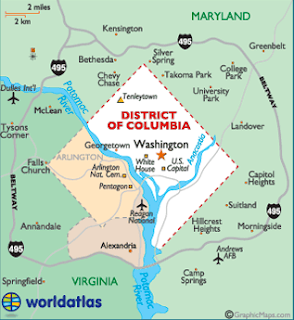 Despite anything you hear or read, the fact is that the position that President Trump has taken on Jerusalem is exactly the same as has been articulated by Presidents Clinton, Bush43 and...Obama.

Real Clear Politics have the videos to back it up .

Clinton is seen in 1992 saying, "Jerusalem is still the capital of Israel and must remain an undivided city accessible to all."

Bush is seen in 2000. "As soon as I take office, I will move the United States ambassador to the city Israel has chosen as its capital," he says.

Obama is seen in 2008 saying, "I continue to say that Jerusalem will be the capital of Israel. I have said that before and I will say it again."


Of course, there has also been a law on the books since 1995 which recognized that fact (and which Clinton signed into law) and stated that the U.S.Embassy should be moved to Jerusalem. By the way, that law passed Congress by votes of 374-37 in the House and 93-5 in the Senate. Hardly a close call.

Past Presidents did not follow through on their promises.

What is different about Trump?

He actually did what he said he was going to do.

Why did the other Presidents not follow through? They were told that doing so would hamper efforts to broker peace in the Middle East between the Palestinians and the Jews.

How has that worked out?  Not real well as decade after decade passed with no easing of tensions.

Trump is clearly not interested in following the same failed strategies of the past.

You might be asking why is it so hard to broker peace in that part of the world? Why is there so much hatred by Muslims towards Jews? Why have the Palestinians rejected peace plans over and over again over the last century even when given plenty of opportunities to have their own country? (which they have never had in history).

The simple truth is that they don't want anything of the sort unless Israel is not permitted to exist.

Trump is not allowing himself to be played on this issue like all the others before him.

I wrote about Palestine and Israel six years ago and it bears reading it again if you need context about what is really going on with this issue.

Some things really do not change.

Donald Trump does not appear to believe that.

We often hear of the plight of the Palestinians and we see the utter hatred of Israel and the Jewish people by Muslims.  Sitting here in the United States it is hard for the average person to figure out what is going on.  I came across three recent stories that provide a little context.

You might also want to read this story, "A Century of Palestinian Rejectionism" by Fred Siegel for some historical context.

The third story is a column by Diana West where she writes about "The Jihad is Against the Bible". Ms. West says make no mistake, it is Israel in which the axis of Islamic Jihad turns.  Why Israel? West quotes Bat Ye'or's new book "Europe, Globalization and the Coming Universal Caliphate".

Why Israel? Ye'or asks. "Given the immense territories conquered and Islamized over thirteen centuries of expansion and war," she writes, "why would Muslim countries keep plotting to destroy Israel?" And further: "Why does the immense oil wealth of Muslim nations nourish a flood of hatred that poisons the heart of humanity against such a small nation? Why is Israel considered so alarming?"

The well-read global citizen might regurgitate something about land, modern Zionism and the post-1948 "plight of the Palestinians," but these are stock narratives overwriting the age-old reason. "What Israel possesses," Ye'or explains, "is the Bible."

To appreciate the depth and breadth of this perhaps obvious but seldom pondered explanation, it's essential to realize that Jewish and Christian Bible characters, from Abraham to Moses to Jesus, pop up in the Koran as Muslim prophets who actually preach Islam, not Judaism or Christianity. This is the time-wrinkling, religion-morphing way in which Islam repudiates what it regards as falsifications in both the first (old) and second (new) testaments. Given that the Jewish and Christian religious books long predate the Islamic religious book, it's not surprising that in their Koranic guises the biblical characters "wander," as Bat Ye'or writes, "in uncertain space with no geographical or temporal references." Still, Muslims claim that these same "Muslim" characters lived in "Palestine," Bat Ye'or writes, on the basis of the "Jewish and Christian scriptures that they reject."

The land of Israel itself -- whose "every region, town and village is mentioned in the Bible with historical and chronological precision" -- is thus "sacrilegious" to Muslims, she explains. "They observe with destructive rage this unfolding return of history that they claim as their own. ... Any confirmation of the veracity of the Bible is seen as an attack on the Islamic authenticity of the Koranic figures taken from the Bible."

So much for those slivers of real estate as being the driver of war on Israel. It is, in fact, a jihad, a religious war against Judaism and the land of the Bible, root of Christianity. As Ye'or puts it, "Israel, in the land of its history, towns and villages, resuscitates the Bible, the book the Koran must supplant."

The bottom line according to West is that the war on Israel is also a jihad against the Bible and Christianity. The real story is that Muslims believe that Christians have gone astray by placing themselves in the lineage of the Hebrew Bible when their real origin is Islam.  Getting rid of Israel and the sustaining Jewish roots is seen as necessary to facilitate the Islamization of Christians which is the final goal.