The overall Washington, D.C. metro area in 2016 was displaced by San Francisco for the first time in recent years with the highest household median income. Washington, D.C. is now second but note the huge gap between those two cites and the rest of the country. 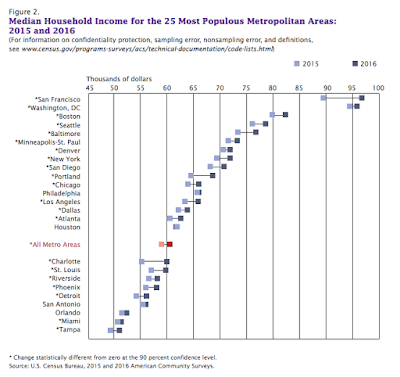 When you further consider that 18.6% of the households in Washington. D.C. live below the poverty level (disproportionately African-American) it gives you an idea how much the rest of those who live in and around our nation's capitol are making.

What was the poverty rate in Washington, D.C. in 2007 before Barack Obama became President?

16%. It doesn't seem that much hope and change got spread around to those that the Democrats say they are looking out for, does it?

What percentage of the vote did Donald Trump get in the District of Columbia in 2016? 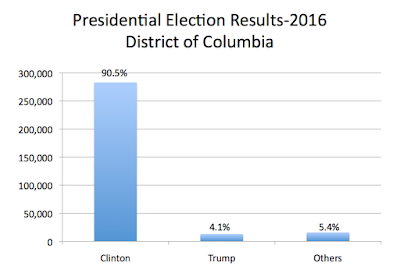 Trump only garnered 12,723 votes in D.C compared to 282,830 for Hillary Clinton. Third party candidates (Gary Johnson, Jill Stein) and write-ins actually got more votes collectively than did Trump in D.C!

A fixed election by an evil foreign dictator does not win by those vote margins.

All of the above explains a lot, doesn't it?

The new household income information is in the U.S Census Bureau's 2012-2016 American Community Survey which is the country's only source that tracks socio-economic characteristics across all 3,142 counties in the United States. One of its objectives is to track the incremental changes that are occurring within various small area estimates rather than national data.

If you want to look for a reason that Trump was elected, consider that data.

If you want another reason that Trump was elected, consider that data.

Of course, those people in and around Washington, D.C. have been largely insulated from what was going on in the rest of the country. The tax dollars continued to flow into Washington in a steady stream to pay the salaries of the government bureaucrats with automatic step increases every year.

It doesn't end there either. There are plenty of lawyers, lobbyists and lunch places along with everything else in DC. ( including the media) that end up with a piece of action. However, almost all of those jobs and wealth would not exist without the massive amount of money that gets shipped to D.C. with our tax dollars.

All but ignored is the fact is that the people paying the bills in the rest of the country are making a heck of a lot less money than the people they are shipping it to.

The Washington, DC area has no significant manufacturing base. It does not grow crops. It has no oil wells or coal mines. It does not produce computer chips or other high tech items. It produces almost nothing that creates value in a traditional economy. Yet, its residents have the highest household income in the country! What more is needed to know that something is seriously amiss in our country?

Washington is largely a gigantic redistribution machine today. Money comes in one end from one group of people and it goes out the other end to another group of people. Money and wealth have been created in Washington because of the bureaucracy to run that machine and all of the politicians, lobbyists, lawyers and special interest groups working to get "their share" of money coming out of the other end.

In the past, those in Washington could be confident that the good times would continue to roll no matter who was President because everyone was "in on the game." Whether it was a Republican or Democrat it did not matter one whit.

That changed with the election of Donald J. Trump.

Those in Washington are  no longer confident that they will be able to continue to game the system to their advantage.

Trump does not play by the same reasoning and rules that they are accustomed to.

Their entire income and existence is at risk from someone they still can't believe was elected President of the United States.

After all, 95.9% of their friends did not vote for him. How could he have beaten Hillary?

He has to be stopped at all costs.

He can't be allowed to succeed.

The swamp is deep. The depth of their desperation seems to know no bounds.

This Census Bureau data (thank you to the bureaucrats in D.C. who compiled it) may provide you some better perspective of why that is.