The United Nations vote last week involving the decision to move the United States Embassy to Israel's capital city of Jerusalem shows as much about what is going on in other countries as it does in Israel. That is particularly true of Europe where Muslim migration has, and will continue to, change the face of Europe.

The UN vote was taken to condemn the United States for recognizing Jerusalem as Israel's capital. I wrote about this issue earlier this month. 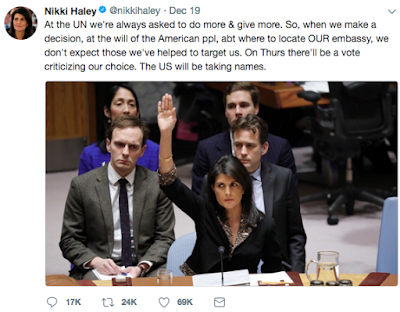 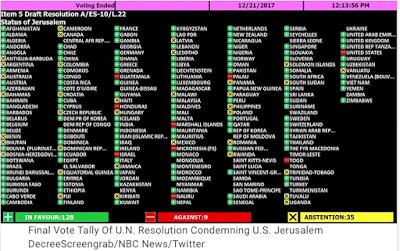 Notice that the only countries in European Union  that did not vote against the United States on that issue were the Czech Republic, Hungary, Poland and Romania. Each of these countries has fewer than .5% Muslims. Compare that to the rest of Europe---most particularly France, Germany, Sweden and the U.K.

There are now close to 50 million Muslims in Europe. About half of those are in the EU countries that include Germany, France, Sweden etc.

Paris is now the home to more than 2 million Muslims.

There are more than 1 million Muslims in London. The mayor of London is a Muslim and Mohammed is now the most popular name in the United Kingdom.

And it will only get worse.

Even with no further migration, Europe will have nearly double the Muslim population it has today within a generation because of higher fertility rates. Pew estimates that Europe's overall Muslim population could be as high as 15% (3 times what it is today) by 2050 with continued high migration patterns. Extending that same pattern to France, Germany and the UK means that Muslims will make up 20-25% of the population in those countries in 30 years. 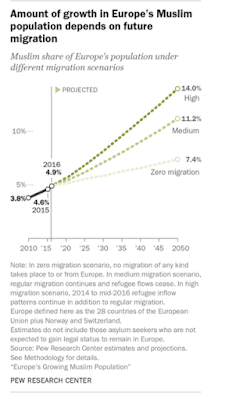 To give you a better understanding of why Israel faces so many challenges in a body like the UN is the fact that 83% of the entire core Jewish population in the world (14.2 million) lives in either the United States or Israel.

The Muslim population in the world---1.8 billion.

In other words, there are about 1,300 Muslims in the world for every Jew.

Do you begin to understand why so many support the Palestinian narrative despite what the actual history and facts are in that part of the world?