Franklin Delano Roosevelt's most famous quote was delivered before a joint session of Congress on December 8, 1941 the day after Japan attacked Pearl Harbor.

"Yesterday, December 7, 1941—a date which will live in infamy—the United States of America was suddenly and deliberately attacked by naval and air forces of the Empire of Japan."


The events of that day changed the arc of the lives of so many people.

One of those was my father who was 18 years old and working in a washing machine factory having graduated from high school the previous June.

Both his father and grandfather worked on the railroad. Both were killed on the job. My father, at age 5, was the oldest of three children when his father died. There were no social security survivor benefits and a pittance of life insurance. My father sold cottage cheese door to door when he was 6 years old to help support the family. He worked almost every day of his life from that point forward until he retired in his 60's.

College was out of the question. He had the intelligence and the drive but there was simply no money. There were no Pell grants or $1.4 trillion to be spent on student loans. You were just considered to be "out of luck" if you did not have the money for college.

My father used to joke that he was so poor growing up he did not know there was any more to a chicken dinner than the neck and wing until he was 19 years of age and in the Army. It probably wasn't far from the truth.

He served in the Pacific Theatre in World War II fighting the Japanese because of what happened on that day of infamy.

He made it through the War and was able to attend college on the GI Bill and by working various odd jobs . He began a career as a corrugated box salesman and ultimately ran a company division with over 25 box plants across the country.

That day also changed the arc of Dwight Eisenhower's life.

Eisenhower graduated from West Point barely in the top half of his class in 1915.  He never saw combat in World War I.  His career was considered undistinguished for the most part over the next 25 years.  He served as a major for 16 years.  He did not reach the rank of Colonel until March, 1941. He was promoted to Brigadier General in October, 1941, a mere two months before Pearl Harbor. However, two years after Pearl Harbor he was a 5-Star General.

Eleven years later he was President of the United States.

The events of that day also changed the arc of the geopolitical considerations and moral dimensions of war with the decision to use the atomic bomb on Hiroshima and Nagasaki.

That final decision was left to another man who undoubtedly had no idea on December 7, 1941 that the arc of his life would change so dramatically in just over three years. In fact, he served only 82 days as Vice President before succeeding Roosevelt as President in April, 1945. 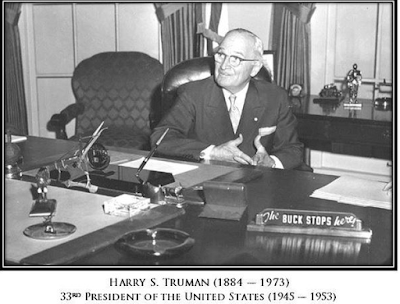 It would only be a few months before he would have to make one of the most momentous decisions any man has ever had to make. Harry Truman said "the buck stops here" and he meant it.

I just finished reading Bill O'Reilly and Martin Dugard's book "Killing the Rising Sun" on the events that transpired after that "day of infamy".

Many people make much of what they call the the tumultuous, turbulent and treacherous times we live in today. Many seem to think it is unprecedented. Of course, many of those also think Donald Trump has single-handedly brought the United States to its darkest hour.

How little they know. How fortunate they are to live today.

A few reminders from the book about others that saw the arc of their lives change. In many cases there was no arc to their life as that day of infamy was the beginning of the end of their lives.

All info below from the O'Reilly book.

In the Battle of Peleliu in the South Pacific the Marines took 6,500 casualties in one month to rid the island of 11,000 Japanese defenders. It took an average of 1,500 rounds of ammunition to kill just one Japanese soldier as most were hunkered down in a cave network.

On one night in March, 1945 the United States deployed 329 B-29 bombers to drop two thousand tons of M-69 napalm fire bombs on Tokyo. 100,000 Japanese were killed that night, one million left homeless and one-fourth of the city destroyed. (To learn more about this raid read my post here written in 2014.) There were actually more Japanese killed that night in that raid than in  either of the two atomic bomb attacks on Hiroshima and Nagasaki that led to the Japanese surrender.


Out of 450,000 on the island of Okinawa, 150,000 were killed or committed suicide after the Americans invaded the island. The Americans lost 12,000 men with 5,000 of those being sailors who were killed by Japanese kamikaze attacks. Another 38,000 Americans were wounded.

People have no concept of what "horrible" means today when you consider that period in our history.

It is still a subject of much debate whether the atomic bombs should have been used. Some argue that the Japanese would have soon surrendered anyway. Douglas McArthur was one. However, McArthur was itching to lead a land invasion of Japan to burnish his image. He was not happy with the fame that Eisenhower had achieved in such a short time.

I think it is unlikely that the Japanese would have surrendered until much, much greater casualties had been taken on both sides. Countless more than the number of casualties from Hiroshima and Nagasaki. That is the way Truman also viewed his decision.

Interestingly, O'Reilly got three former Presidents to state that they believe that Truman made the right decision. (Carter, Bush 41 and Bush 43). I imagine that O'Reilly also posed the question to Clinton and Obama as well. There is no mention of their views in the book. Is that a surprise with either of them?

I know my father had no misgivings. His next stop surely was going to be towards the Japanese islands from the base he was stationed at in the Mariana Islands. The same base that most of those B-29 bombers (including the two who flew over Hiroshima and Nagasaki) were based.

The war ended and he got to restart his life on an entirely new path.

Would he have had the same opportunities if he had not had to stop his life and take a detour because of what happened 76 years ago?

Would Dwight Eisenhower ever have risen above the rank of Brigadier General?

The answer to both is unknowable, but unlikely.

However, what is knowable is that human beings have an enormous capacity to deal with adversity and have the ability to persevere when it matters most.

However, it also marked a time when so many stepped forward and stepped up.

It is worth remembering all of this as we hear so much criticism of our country, our President and our heritage today---not from people in other countries---but from those in our own country.

What started as a day of infamy grew to become millions of inspiring stories.

For those who think they have it tough in this country because Trump is President, or a baker won't bake your cake, or someone won't forgive your student loan debt, you might think about the real problems faced by previous generations.

It might also provide some answers about why no one who calls themselves an American should not be standing for the National Anthem.

Forget about yourself. Think about those who went before you.

I doubt that few would want to trade places.