One of the most divisive issues in America is the issue of illegal immigration.

There is no doubt in my mind that Donald Trump would not have been elected President of the United States but for his strong stand on illegal immigration.

On the other hand, Democrats often say that this is simply untrue. They argue that non-citizens actually have lower incidences of crime than citizens. Therefore, why not just open the border and, at most, make illegal immigration a mere civil offense subject to a fine?

Here is Presidential candidate making that point on Twitter.

What are the actual facts?

The Department of Justice just released a report on federal arrest and prosecutions broken down between citizens and non-citizens.

Bear in mind when you look at this data that the U.S. Census Bureau reports that non-citizens make up just 7% of the population.

This graph from the report compares the percentage of all federal arrests by citizenship status from 1998-2018. 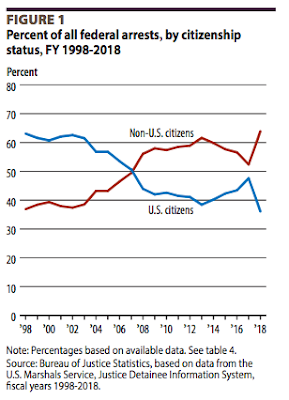 Non-citizens were responsible for 64% of all federal arrests in 2018 even though they make up just 7% of the population?

It is true that arrests for illegal entry into the United States are included in these numbers which skew the numbers.

However, what is particularly shocking is that immigration arrests doubled between 2017 and 2018. 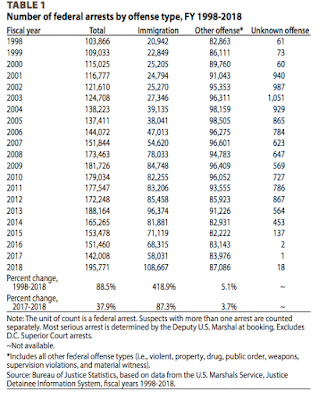 Democrats are offended when what is occurring on the southern border is called an "invasion". What other conclusion can you come to after looking at these numbers?

When you see these facts it also shows in stark detail how many law enforcement and justice system resources are being spent on this issue. It involves the use of massive human resources at the border and billions and billions of dollars of spending.

You begin to see what President Trump is referring to when you look at federal arrests made when immigration offenses are excluded from the numbers for the 7% of the population who are non-citizens.

24% of all federal drug arrests and 28% of fraud arrests involve non-citizens. Crimes like murder, rape and other violent crimes are state crimes that are not included in the DOJ report. There is no national data base involving all state crimes so no one really knows if non-citizens are committing more crimes or not at the state and local level.

However, if you look further at just federal prosecutions, 43% involve non-citizens and 57% were American citizens. Bear in mind that almost all (99.7%) of the federal prosecutions involve crimes other than a first-time illegal entry into the country.

If there is a prosecution for an immigration-related crime (as opposed to a mere arrest) it involves a reentry by an individual who has already been deported at least once or involves a human smuggling charge. First-time illegal immigrants who are arrested typically go before a federal magistrate and are sent back to their home country unless seeking asylum. In effect, they don't get much more than a slap on the wrist and are told not to do it again.

I found one other shocking statistic in the report involving the growth in federal arrests of Central Americans since 1998.

Those are the facts.

Beto O'Rourke, Bernie Sanders, Elizabeth Warren, Kamala Harris can choose to ignore the facts. However, how do you maintain a country without discrete borders and respect and enforcement of the law?

We hear that building a border wall is a waste of money. How could that be the case when you see how much money is being spent year after year on immigration enforcement, law enforcement, the justice and prison system on those who should not be in the country in the first place?