Myths of Medicare for All

The Democrats appear to be all in on proclaiming that healthcare in America should be provided in a "Medicare for All" system.

To hear the candidates speak about it you would think that Medicare for All will cover everything and cost nothing. Bernie Sanders is continually stating on the campaign trail that his Medicare for All plan will have no deductibles and no coinsurance. People will pay nothing for their care other than a little more in taxes. Of course, he argues that almost all of that additional tax burden will fall on "the rich".

Sanders also states that there will be no private insurance as part of the system. It will be government-run to eliminate all of the profits and administrative costs in the current system.

Let's take a look at some of these statements by looking at how Medicare actually works right now for senior citizens. When you understand how the current Medicare program  works I hope you can see how misleading all of this "Medicare for All" talk is.

Let's look at some of the Myths of Medicare for All.


The Funding of Medicare

Medicare was originally established as a program to cover Hospital costs (Part A) and non-Hospital costs (Part B) such as doctors visits, diagnostic tests, etc. A 1.45% payroll tax is levied as part of the FICA taxes on payrolls to fund Part A. This tax applies to both employees and employers so it amounts to 2.9% on all payrolls in the United States. It is a flat tax so it applies to everyone. It is not a progressive tax like the income tax.

Part B is paid for with 80% federal dollars (paid with general revenues) and 20% by those on Medicare through a monthly premium. That current premium is $135.50 per month. There is no reduction for those on low incomes. Everyone has to pay it to have Part B coverage which is optional. Those with joint annual incomes above $170,000 pay more.

Prescription drug coverage was not a part of original Medicare. A big reason is that very few drugs were used in treatments in 1965 when Medicare was enacted. Drugs are now covered under Part D of Medicare but that requires an additional premium for coverage and there are also separate deductibles and coinsurance with that program as well.

Keep in mind the current Medicare FICA tax is to just pay for those currently on Medicare. How much higher would that tax have to be to also cover those under age 65 today? How high would the monthly Part B premium be under Medicare for All? What about the premium for drug coverage?


Medicare Does Not Pay Everything

Medicare as it exists today has fairly substantial deductibles and coinsurance amounts in addition to the monthly premiums and payroll taxes in effect. 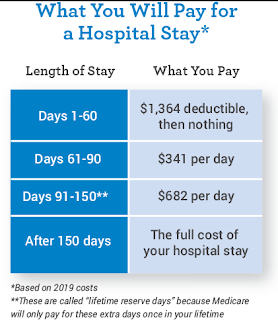 Under Part B there is an annual deductible of $185 and you also have to pay a 20% coinsurance amount on every bill.

As you can see, there are fairly substantial out of pockets deductibles and coinsurance under Medicare. The deductibles are also adjusted upwards each year with inflation.

Medicare also does not cover you for any medical services outside of the United States. While private insurance typically covers you for foreign travel, there is no coverage under Medicare.

How is it that Bernie Sanders believes that "Medicare for All" would have no out of pocket costs when Medicare today has extensive deductibles and coinsurance?

Due to the fact that Medicare does not pay for everything a robust private supplemental insurance market has been developed by private insurance companies to cover the gaps in coverage.

About 80% of those on Medicare have some type of private insurance to supplement Medicare. These "Medigap" plans, as they are popularly known, have different core plans with varying costs based on how much of the "gap" they cover, the age of the individual, where they live and whether they smoke. Here is an sampling of rates for Decatur, IL. Costs in larger urban areas would typically be higher. 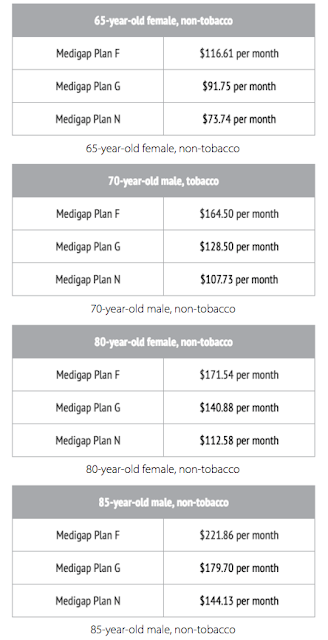 These plans have proven popular as enrollees in these private plans typically get better coverage with lower premiums than with traditional Medicare.

As you can see, private insurance companies have a significant presence and role in Medicare. Is it realistic that the Democrats are going to completely eliminate private insurers from the healthcare landscape?

A big argument of the Democrats for Medicare for All is that under such a system there would be enormous cost savings because all of the private insurance company costs and profits would be removed from the system.

However, as I have pointed out in a previous blog post, if you removed all of the costs of the insurance companies out of all the health expenditures in the United States you will still have 93% of the costs remaining.

Elizabeth Warren stated in the last debate that the health insurance companies made $23 billion in profits last year and getting rid of them will make everything great.  I will assume her numbers are correct. However, almost $4 trillion will be spent this year in total healthcare expenditures in the United States. That means insurance company profits make up only 0.58% of total costs---about one-half on one percent. How much difference is that going to make?

The Democrats also like to target the large pharmaceutical companies and the price of their products. However, drug costs make up only 10% of all healthcare costs. Again, the profits of drug companies cannot represent more than 1% of all health care expenditure in the United States. And those profits are the reason most of the innovation in drugs in the world takes place in the United States.

In other words, the insurance and drug companies are good targets for campaign rhetoric but eliminating them from the system will have almost no impact on total costs.

What is likely to occur if we were to convert to a "Medicare for All" system is that countless numbers of hospitals would be forced out of business and we would surely see many doctors retire or quit the practice of medicine.

The truth about Medicare is that, on average, it only pays healthcare providers at a level that is about 85% of their costs. In other words, many hospitals would have to drastically cut services and/or costs in a Medicare for All world or they would quickly go bankrupt.

Doctors would see their revenues and incomes drop drastically. Since almost 50% of doctors in the United States are 55 years of age or older it is not hard to predict that many would choose to retire rather than to continue operating their practices.

The current system only works today because private insurers and payers pay providers at about 120%-140% of their costs. In effect, the private sector is subsidizing the costs of public sector programs such as Medicare and Medicaid.

As Medicare and Medicaid have restrained reimbursements over the years the private sector has had to pick up more of the tab as this graph from the American Hospital Association shows.

How do we not see substantial cutback in services if the revenues of healthcare providers are not reduced to the level of Medicare reimbursements?

How do doctors, nurses and others who provide healthcare services not see their compensation reduced if the government is the only payer?

Don't believe what you are being told about Medicare for All.

Most of what the Democrats are talking about are myths.

Medicare as we know it is going bankrupt as it is. The current payroll taxes are insufficient for the long-term needs of the system.

Medicare would already be bankrupt without the enormous amount of subsidies the private sector is providing to the health care system which simply could not function with current Medicare reimbursement rates.

Medicare is not free and it has extensive deductibles and coinsurance amounts in place.

You can take all of the costs and profits of private insurers and drug companies and you would barely put a dent in the nation's total healthcare expenditures.

Medicare for All is simply not workable without massive tax increases on every American and/or substantial reductions or cutbacks in the access to care that they are used to. There is no other way around the math wherein we spend about $4 trillion per year on health care in the United States.

Anyone who tells you anything differently is simply not being honest with you.
Posted by BeeLine at 5:15 PM