Negative Yields In Our Future?

I have written before about the enormous amount of debt in the world that nows carries zero or negative interest rates.

In that blog post I featured this chart from mid-June that showed the share of government debt in various countries around the world that are bearing negative yields. 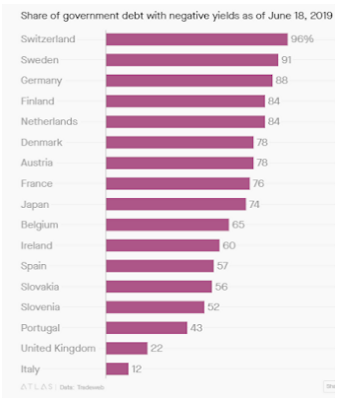 In the last two months the amount of global debt that carries negative yields has soared by another $4 TRILLION!

There is now $17 trillion in debt around the world that carries negative interest rates. In effect, the saver has to the pay the borrower to take their money.

Negative rates have previously been confined to government bonds, but in Europe Zero Hedge points out that we are now seeing negative yields on a large percentage of investment grade corporate bonds as well. In July, 2/3 of AA-rated Euro bonds and 1/3 of A- rated Euro yielded less than zero. The developments of the last month has undoubtedly increased these numbers.

What is truly amazing is that some high-yield corporate bonds (1/5 of BBB-rated and nearly 1/10 of BBB- bonds) have also gone to negative yields.

However, the most shocking statistic in the Zero Hedge article is that the United States now has 94% of all the positive interest yielding investment grade bonds in the world! 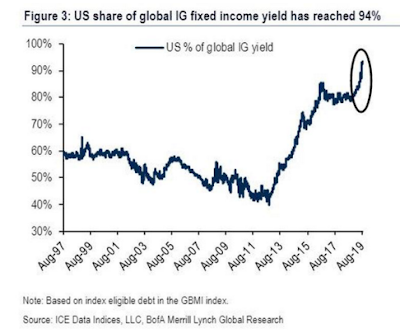 The average yield on the $27.8 trillion in non-U.S. investment grade bonds worldwide has declined to just .16%! 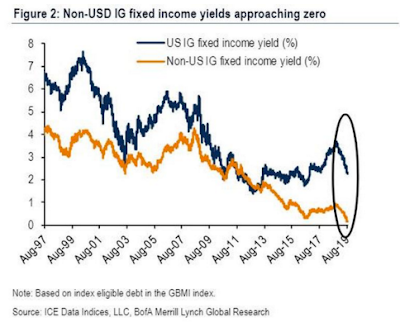 What does all of this mean?

We have reached a point in which the only place in the world that a saver or investor can obtain a positive return on an investment grade bond is to invest it in a U.S. dollar denominated bond.

Is it any wonder that the Federal Reserve has to cut interest rates?

I also find it interesting that recently I have seen several articles suggesting that all of these negative interest rates are natural.

"The Non-Weirdness of Negative Interest Rates" appeared in Bloomberg Businessweek recently which suggests that all of this is normal and to be expected in a world with ever-increasing wealth concentration, low rates of global growth and lots of cash.

Negative rates are showing up everywhere, seemingly turning on their heads traditional notions of lending and borrowing. Negative yields just don’t seem to make any sense. A lender is supposed to get paid to part with capital, while a borrower is supposed to pay to use that cash for some purpose. It seems crazy that anyone  would voluntarily part with their money, only to end up with less of it.

But what if negative rates are totally normal?


The article goes on to suggest that there are storage costs with almost all assets. It costs money to rent a safe deposit box, or store gold, grain or oil. It costs money to own real estate. It costs money for you to have someone manage your stock portfolio. Why is it weird to think that you should also have to pay to store cash?

There’s lots of money out there and a limited capacity to store it all. So increasingly, savers are going to have to pay for money storage services. And although it’s not much consolation, we can at least remember that whether it’s fees for oil tanks, safe deposit boxes, security guards, insurance, or wealth managers, there's nothing unnatural about being forced to pay to preserve your wealth.

Another article on the subject appeared recently in Quartz in which the title question was "Are Negative Interest Rates Unusual, Natural or Both?"

Negative rates may have been unthinkable for most of civilization, but they are now part of our reality. The evidence seems to suggest much lower, and perhaps even negative, rates are being driven by market forces, which makes them natural. But this only shows things change, and one day the old order could return.


Negative rates unthinkable for most of civilization? That is an understatement when you consider that the concept of a loan requiring that the borrower pay positive interest dates back as far as 2500 BC.

Is there anything normal about negative interest rates? I am not aware of any other period in history when it was not natural to expect to be paid interest when you loaned someone money. It has never been seen before through all kinds of economic conditions that have included recessions, depressions, revolutions, wars and technological upheavals.

I also don't buy the argument that this is all due to increasing wealth concentration.

For most of mankind's existence most people lived in poverty. Wealth concentration was much higher in 1519, 1719 and 1919 than it is in 2019. The royals and a few others controlled almost all the wealth in any country in the world.

In fact, one study showed that 94% of the world's population lived in extreme poverty and 84% lived in poverty in 1820.

Those numbers have fallen dramatically, especially in the last 40 years. Those living in extreme poverty have fallen from over 40% of the world's population to less than 10% today. 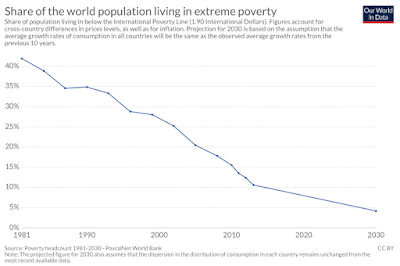 I also don't see the relevance that you have to pay storage fees for gold, oil, grain or other assets so it should also apply to loans of your cash. Yes, those assets require storage fees but the asset owner also has the expectation of a possible return on the investment in the underlying asset. The storage fees are friction costs.

That is not the case with a bond. Interest on the bond is the investment return. There is nothing else to compensate the investor other than the return of the asset at the bond's maturity. Of course, negative yields mean there will not be a full return of the principal.

The one thing that is true is that negative yields have become a reality around the world.

How long will it be before those negative yields start appearing in the United States?

It may just be a matter of time if recent global trends continue.

Is it natural? Will this be the new normal?

4500 years of history says NO. However, in the short term anything can happen.

We are seeing that right now.
Posted by BeeLine at 8:45 PM