President Trump announced last week that he was instituting a 10% tariff on an additional $300 billion on imports from China effective September 1.

This is in addition to a 25% tariff on another $250 billion of Chinese goods that has been in effect since May. This levy started at 10% in July, 2018 and was increased to the higher level several months ago after China allegedly reneged on a proposed trade agreement between the two countries .

This effectively means that all imports from China will now be subject to some amount of tariff.

The 25% tariff is being applied to foods, chemicals, minerals, clothing, textiles and machinery items.

The new tariff will be applied to items like cell phones, laptops, footwear and toys.

As expected, China has retaliated with its own tariffs but the wide trade deficit between the two countries makes this a losing proposition for China. China also announced that it was allowing its currency to fall which spooked stock markets causing the Dow in the U.S to drop 750 points on Monday.

The United States imports over $550 billion of Chinese goods. China imports only a little more than $100 billion of U.S. goods. This results in a $450 billion annual trade deficit for the U.S. 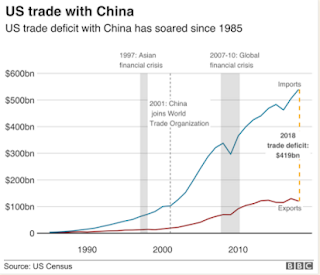 China's economic power has grown over the years with its one-sided trade views. China effectively closed off imports of U.S. goods for decades. To do business and get access to its huge consumer market the Chinese government forced many U.S. companies to commit to manufacturing sites there. In addition, China required them to provide their most valuable intellectual properties in order to have an entry into the Chinese market. What intellectual property China did not obtain legally they stole illegally.

Republicans and Democrats alike did nothing about the inequity or the illegality. Our elected representatives literally gave away substantial portions of our domestic economy by thinking short-term rather than long-term. They had the advantage of having the most attractive market in the world and yet they gave it away and did not get anything in return.

China grew and got richer with each passing year. At the same time, the United States saw millions of high paying middle class manufacturing jobs lost. This change also caused a further worsening of the social and economic divide between the college-educated service class and the high school educated worker class.

China has been taking advantage of the trade situation for years and years and no one did anything. China has also been manipulating its currency to their advantage. All the while they also have blatantly stolen intellectual property from U.S. companies for decades without being held accountable. This is particularly dangerous as innovation has become the primary product of the United States. Having it stolen and getting nothing in return is a recipe for long term economic disaster since manufacturing base of the United States has been hollowed out.

Only one man stood up and questioned the wisdom and fairness of it all. That man was Donald J. Trump.

It is not easy negotiating with the Chinese on trade because they have had it so good for so long. No one wants to give up an extremely advantageous situation easily. The Chinese are no different.

The mainstream media seems to be portraying these tariffs on China as another example of an unhinged Donald Trump who is going to do great damage to the American economy and consumer. You will undoubtedly see this view played up in the mainstream media and by Democrats.

You will see stories of how the tariffs will be passed through to the American consumer as a hidden "tax" as prices of products from China will rise. Kamala Harris repeated this line at the Democrat debate last week.

My advice is don't believe everything you hear. China is a master manipulator of its currency. China also needs the U.S. market. They do not have ready alternatives for the exports required to keep their manufacturing plants running. Japan only imports $150 billion of Chinese goods. Germany $110 billion. Together these two large economies import less than half of what the U.S. does.

Consider as well that the tariffs on almost half of China's imports have been in effect for nearly a year. Where is the inflation effect in prices from the tariffs? 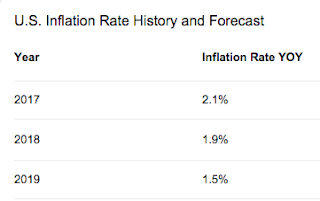 Inflation is lower over the last 12 months with tariffs in effect than they were in 2017 and 2018 when there were no tariffs on China imports.

I don't know anyone who thinks these tariffs are a great idea for the long term. Free and fair trade has proven to be the best formula for improving global wealth and well-being.

However, things have not been fair with China for a long, long time. How else do we get China to play fair unless they get hurt in the pocketbook?

Our exports are dominated by companies in the paper and plastic recyclable industries. 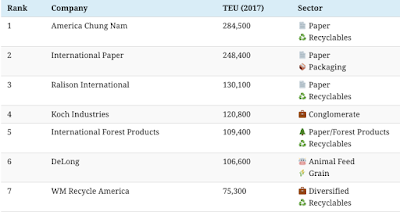 Our imports are dominated by consumer companies like Walmart, Target, Home Depot and Lowe's.

We have been importing masses of manufactured consumer goods from China which also effectively wiped out a great deal of middle class manufacturing jobs in the process.

What did China take in return? Our trash. It begins to give you a better idea of why something has to be done.

However, as I pointed out in a blog post last year, China does not want our trash any more. Therefore, unless we can get China to level the playing field a little we are facing even bigger problems in the future.

Keep all of this in mind as you see news reports that try to paint Trump as unbalanced or unreasonable. They will say he is sticking it to U.S. consumers. Or farmers. Or the stock market.

When you hear this ask yourself is there another way to make China play fair? If there is, why hasn't someone else done something about China before?

Does it look like the United States is playing on level playing field in trade?

Fortunately, we have a President that understands all of this and is willing to hold those to account who don't want to play fair.

I can safely say that there is no other man or woman in either political party who would have had the courage to take on the Chinese on this issue and the commitment to follow it through as Trump has done.

There will be short pain. Trump will take criticism. He will be second guessed. However, short term pain is almost always necessary for long term gain. Fortunately, Donald Trump also understands this.

However, it is important to remember that no matter how strongly Trump feels about the issue he will only succeed if he has the support of the American people. Understand what he is doing and what the long term stakes are. There may be some pain. However, I can assure you that any pain now will be nothing compared to where we end up if we don't confront China on this issue now.
Posted by BeeLine at 9:57 PM