Things I Learned This Week

Every week you should be learning something.

If you are not advancing, you are dying.

Here are a few random things I learned this week that might also advance your knowledge.

Researchers who study hand preference believe there is a natural inclination for most people to be right-handed due to biological and genetic causes. This is because language and speech is controlled by the left hemisphere of the brain. The left hemisphere also controls the movements of the right hand as well as the movements necessary to produce written language. All of this has resulted in millennia of evolutionary development that is biased genetically toward the right hand.

It is estimated that 15% of humans have a preference towards the left hand.

However, look at these statistics on the percentage of left-handers by country around the world.

The United States and Canada are the only countries in which left-handers are close to that number. There are clearly a lot of parents and/or teachers in other countries interfering with Mother Nature.

Of course, this also used to occur in the United States if you look at the historical numbers of left-handers in the population.


Is it a coincidence that in baseball left handers seem to have an advantage in getting to the major leagues or that 2/3 of NHL players shoot left-handed?

We hear a lot about global warming and climate change in the news but the reality is that the weather in the United States this summer is (and has been over the last few years) much cooler than average.

Can you imagine the climate hysteria if we saw anything close to what was experienced in the summers in the 1930's?

Did you know that three Presidents of the United States were born in 1946?

Did you also know that Trump is older than both Bush and Clinton?

Running for President has become a big business in building the "brand" of a politician and increasing social media presence, book sales and speaking fees. 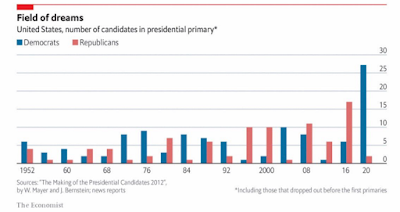