Diversity at the University

What is the most powerful word in higher education today?

Is it not interesting that at a university (which in Latin literally means "turned into one") today the highest order is to place the most focus on those things that divide people rather than bringing them together in a common cause---the pursuit of knowledge and truth.

Anthony Kronman, who is a Professor of Law and the former Dean of Yale University Law School, recently wrote about "The Downside of Diversity" in an essay in The Wall Street Journal in which he made the point about diversity I made above.

“Diversity” is the most powerful word in higher education today. No other has so much authority. Older words, like “excellence” and “originality,” remain in circulation, but even they have been redefined in terms of diversity.

At Yale, where I have taught for 40 years, a large bureaucracy exists to ensure that the university’s commitment to diversity is rigorously enforced—in student admissions, faculty hiring and curricular design. Yale has an Office of Diversity and Inclusion, a Dean of Diversity and Faculty Development, an Office of Gender and Campus Culture and a dizzying array of similar positions and programs. At present, more than 150 full-time staff and student representatives serve in some pro-diversity role.

Yale’s situation is far from exceptional. “Diversity and inclusion” is a dogma repeated with uniform piety in the official pronouncements of nearly every college and university. At Dartmouth, the Office of Pluralism and Leadership “engages students in identity, community and leadership development, advancing Dartmouth’s commitment to academic success, diversity, inclusion and wellness.” The University of Michigan proclaims that “diversity is key to individual flourishing, educational excellence and the advancement of knowledge.” At the University of Oklahoma, students are required to complete a mandatory “Freshman Diversity Experience” by the end of their first semester.


If you wonder about the cost of all this consider that the University of Michigan spends $11 million per year on "Diversity Administrators" alone. That is enough to pay for 700 students to attend the university on a full ride.

There is little question that diversity is a noble value. This is especially true on a college campus where you want a range of backgrounds, beliefs and experiences to influence and inform debate and inquiry.

However, this is not how diversity is being used in university settings today.

But diversity, as it is understood today, means something different. It means diversity of race, ethnicity, gender and sexual orientation. Diversity in this sense is not an academic value. Its origin and aspiration are political. The demand for ever-greater diversity in higher education is a political campaign masquerading as an educational ideal.


That diversity seems to be centered primarily around political grievances where various groups argue about injustice, disrespect or abuse.

The life of the classroom is transformed as a result. It is common to hear complaints that an assigned text is disrespectful of women, blacks, the gender-fluid or some other oppressed or marginalized group. White, male, heterosexual students are often attacked on the grounds that their comments reflect a smug and privileged view of the world. Such complaints are hardly new. I have heard versions of them at Yale for the past 40 years.

What is new and discouraging about today’s academic culture is the unprecedented weight that these grievances are given by teachers, students and administrators alike. Even to raise them puts one on a high moral ground that requires all other considerations to be put aside until the grievance has been assuaged by an appropriate act of apology or reform. Raising it amounts to a demand. It brings the conversation to a halt. It converts the classroom from an open space for the free exchange of ideas into a political battleground.


I recently read a great novel that paints a wonderful (but terribly troubling) view of what all of this diversity and political correctness have done to our universities. The book is written as a satire. However, doesn't the best satire have an enormous amount of truth to it?

The book is Campusland by Scott Johnston. Scott is a BeeLine follower and was nice enough to send me an advance copy of the book. It is set at the fictional Devon University which is an Ivy League school in the New England town of Havenport. The fact that Scott is a Yale grad probably did not have anything to do with the things he writes about as occurring at Devon. It is Scott's first novel but you would never know it reading the rich descriptions and the colorful characters that come to life through his written words. 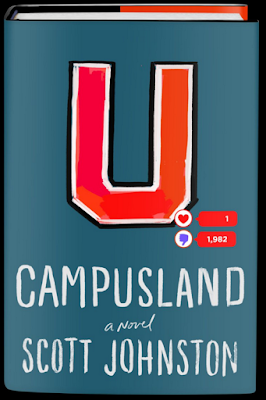 The main character in the book is Ephraim Russell who is an Assistant Professor at Devon and is competing with another assistant professor for a sole tenure position in the English Department.

Everything was looking good for Eph (he even has a beautiful African American girlfriend who he met at a climate rally and who is the assistant to the University President) until he assigns The Adventures of Huckleberry Finn by Mark Twain in his American Literature class.

Why would he have anyone read such a racist book?

Why would he assign a book that makes many students feel unsafe by the language in the book?

Why would he not assign books by African-American or Native American authors from the 19th century American literature rather than Twain's book?

Why would Devon allow a racist like Eph to teach its students?

This is just the beginning of Eph's problems as he has to confront the modern university framework that values diversity more than anything else. The fact that Eph is a progressive politically, along with everyone else at Devon, does matter one wit.

Campusland is well worth the read to better understand how far afield higher education has gone in putting the politics of diversity above all else.

It goes on sale next week.

Reading the book you might also better appreciate these two pull quotes from Kronman's essay that I thought were particularly on point.

Diversity is supposed to elevate the college experience. Why is higher education allowing it to diminish it? Why have universities stopped trying to be places where students are "turned into one" seeking objectivity and "the truth" and instead have become giant bureaucracies encouraging divisions and defending people who see only "their truth'?

You also have to ask what the effect of having students spend four years or more in this type of environment are having on the overall level of political discourse in the nation? The evidence suggests that it has been far from helpful.
Posted by BeeLine at 8:59 PM