Looking For A Few Good Men

Researchers at Cornell University have made an astounding discovery about why marriage rates are falling according to to this article.

Previous studies had attempted to answer why marriage rates are on the decline, but most focused solely on gender ratio discrepancies as opposed to looking into the specific socioeconomic characteristics that make a particular man and woman a good match.


The researchers at Cornell put together a data set on the financial characteristics of men who had actually gotten married over the last few years (the "dream" men) and compared them to unmarried men who were actually currently available to unmarried women (the "real" men).

Researchers found that these estimated potential “dream” husbands had an average income about 58% higher than the actual unmarried men currently available to unmarried women. These synthetic husbands were also 30% more likely to be employed than real single men and 19% more likely to have a college degree.


I guess that really shows there is some truth to the statement you hear from time to time "that all the good men are already taken."

Or course, you did not have to wait for researchers at Cornell University to know this because I have been writing about the effects that gender economics were having on marriages in these pages for at least six years.

Seeing this "new" research I thought this might be a good time to republish my blog post "Marriage and Money" that I wrote a couple of years ago that spoke to this exact issue.

Why is it only now that researchers at Ivy Leagues schools are discovering that there may be something to the fact that marriage rates are down because of the significant imbalance in college degrees (and incomes) between men and women?

BeeLine...the shortest route to what you need to know.

Four years ago I wrote a blog post that is still among the five most viewed on BeeLine. It was titled "Degree Dearth=Date Dearth" and it detailed what I predicted would be an increasing problem for young women seeking a husband---the significant imbalance between female and male college graduates.

Why is that a problem?

Women have historically tended to date and marry men of at least equal educational attainment. However, that is becoming an increasingly difficult goal today. Almost 60% of college graduates are now women. Only 40% are men. This is true for almost all college degree programs. 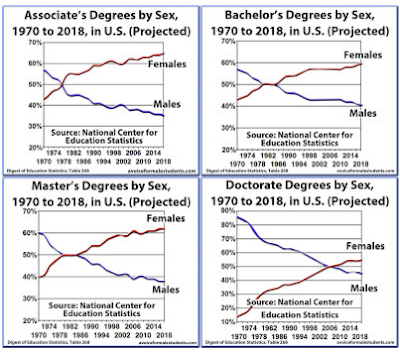 CNBC.com recently wrote about the problem in a story titled "Millennial women are 'worried', 'ashamed' of out-earning boyfriends and husbands".

There is also data that supports the fact that when the woman earns more than the man in the marriage, the odds of the marriage ending in divorce increases.

You can see the dimensions of the problem even better in the results from the recent U.S. Census Bureau study that I cited last week on "The Changing Economics and Demographics of Young Adulthood: 1976-2016" which showed that more 18-34 year olds are living with their parents than with a spouse.

That study had another interesting statistic with regard to the income of 18-34 year old males.

In 1975, only 25% of men of a similar age failed to achieve that level of income (in constant dollars).

If you are a well-educated, young woman looking for marriage material, that statistic is not real comforting today. The pool of eligible bachelors could be looking pretty small depending on where you live.

You know it is bad when there are 10 women for every 8 men in a city (Fairfax, VA) and that is in the Top 10 list for best U.S. cities for dating. 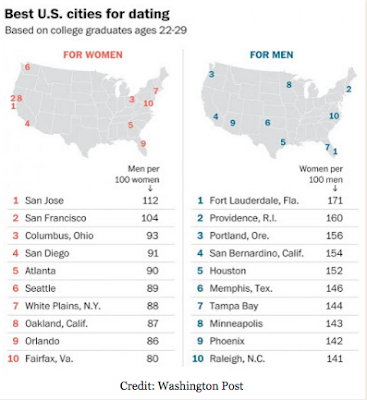 As I stated above, all of this talk of education and income levels should not matter. After all, isn't it about love and companionship first and foremost? If you have that all should be well in the world.

If you doubt how powerful these factors are in us, consider the survey research I cited in a previous blog involving the dating preferences of millionaires . When asked what they were looking for in a potential spouse insofar as money is concerned, there was a massive difference between men and women.

Many marriages survive and thrive despite the woman bringing home more money. However, like everything else in a marriage, it requires a lot of effort to make it work.

What is particularly interesting in all of this is, despite the fact that many Millennial women are earning more than Millennial men today, the youngest Millennials (ages 18-25) of both genders are increasingly in favor of a traditional home in which the man is the breadwinner and the woman stays at home. This is particularly true of young males.

This is from a Daily Caller article on the survey which has tracked young people's opinions on the roles of men and women since 1977.

42 percent of high school seniors in 1994 believed that the best family arrangement was one in which the husband was the financial-earner and the wife stayed at home — this figure increased to 58 percent in 2014. When looking specifically at men ages 18-25, support for this arrangement increased from less than 20 percent in 1994 to nearly 50 percent in 2014.

I assume these young men have not seen the Census Bureau study above in which they are more likely to be living in their parent's basement than supporting a young bride at home in a few years!

The other thing that young women have not likely seen is this blog post by Penelope Trunk on "How To Pick a Husband If You Want To Have Kids".  I referenced Ms. Trunk's advice to women on this subject in my previous post on this subject. I don't know if the choices are as stark as she lays them out but I think there is food for thought here.  For me, this would turn daunting into depressing if I were a single woman.

This is how Penelope Trunk sees it.

You cannot pick a husband to have kids with until you know if you want to work full-time while you are raising them. Some women will say they know for sure that they do want to work full-time. Most women will say that they don’t know for sure. But there are actually only two choices: be a breadwinner or marry a breadwinner. Then, within those two choices, there are a few strategies you could use.

Most people just will not like these choices. Nothing here is good. It’s reality, and of course it’s not as good as fantasy. The only good, real thing is that you have choices, and you can figure out who you are and what you need and you can get what you need.

However, as I point out in the statistics above, it may be just as impractical to "go find another" in light of the dating pool of eligible bachelors in various cities across the country.

Should you think that I don't understand the husband/wife dynamic on incomes and think that I am a chauvinistic pig, this is what Ms. Trunk says on the subject. This is a married woman speaking, not me.

Statistically your marriage is high risk if you and your husband are both in the workforce and you earn more than him because surveys show that you will resent him. This is not logical, or social, it is primal. Statistically, you will marry a guy who does not make as much as you and then you will have kids and get a divorce. Because women hate the feeling of out-earning their husbands.

Trunk's article is worth the full read. It may be uncomfortable for a young woman to read it. However, my experience is that too few women are really thinking through the realities of marriage and child rearing in this day and age.

What does it all mean? We will find out in time. However, we are in uncharted territory with regard to the changing roles of men and women in the workforce and in society. Those changes have come faster than our brains are evolving. Marriage is not easy to begin with. It seems to be getting even more difficult with this new dynamic in play.
Posted by BeeLine at 5:00 AM