I come across a lot of interesting facts, figures and charts in my reading and research.

Many times it is not possible to write an entire blog post about them.

This blog post highlights several things that I found interesting but didn't think they would work in a full post. Think of them as BeeLine leftovers after Thanksgiving.

However, just because they are leftovers does not mean they will not nourish you in some way. If nothing else, one of these might prove to be a conversation starter at a holiday party over the next couple of weeks.

1.47 million people in Hong Kong voted in local elections four years ago. This past week 2.94 million voters turned out. There is nothing that makes people angrier than trying to take something away from them---especially their freedom.

The pro-Chinese communists had a rather bad election night in Hong Kong. Democracy is on the upswing in Hong Kong.  More troubles for China. 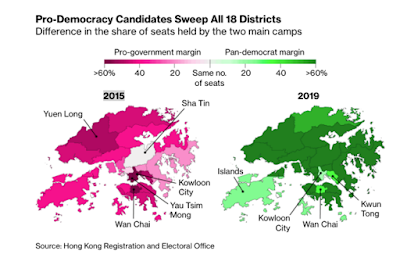 This graph might explain why the Hong Kongers were motivated to vote. A lot of people in the world still do not have that privilege. However, more people live under democratic rule than ever before. You can thank our Founders for starting that trend and the Greatest Generation for giving it a boost with their sacrifices in World War II. 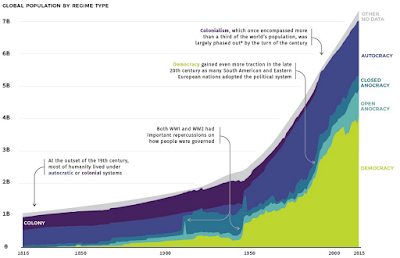 Speaking of freedom and democracy, how receptive are people to handing more of their hard-earned money to the federal government? Bernie Sanders said last week that he planned to raise taxes on everyone making more than $29,000 per year to pay for his socialist vision.

How do you think that will work out?

A recent Rasmussen poll asked likely voters how much they would be willing to spend in additional taxes per year to pay for Medicare for All.

It does not look like a winning issue to me. There are an endless number of people who will vote for free stuff. There are not many who will vote to take money out of their own pocket to pay for it.

I am old enough to remember the last Presidential candidate who ran by telling voters he was going to raise their taxes.

It did not end well for Walter Mondale in 1984. He captured only 13 electoral votes. 3 from D.C. (where all the tax money goes) and his home state of Minnesota (although he carried it by a margin of only 3,700 votes).


Leftovers or Left out?

Harder to do it when you are living in your parents' basement?

More women having sex than men. Are they only doing it with men over age 30?

Are those 28% of men leftovers or left out?

I will leave it to you to ponder this one.
Posted by BeeLine at 6:17 PM