Winners and Losers in the Dating Game

In my last blog post I highlighted this chart and raised the question of why? 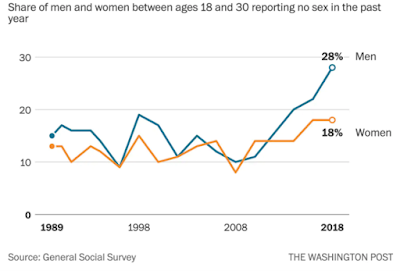 In the meantime, I came across this interesting thesis on the current dating market written by a hedge fund manager (Dan McMurtrie, Tyro Partners LLC). That thesis looks at the dating market in analytical terms looking at market opportunities, market frictions and the outcomes that are produced by changes in technology affecting the market.

It also attempts to answer the question "why?" as this chart is also referenced in the thesis.

The core thesis is that the dating market has been fundamentally changed by the introduction of online dating. This has resulted in a massive power shift that has mostly advantaged women in prime reproductive ages.

The cost of instantly searching for potential mates is now effectively zero. Click a button, download the app. Photos, etc. automatically populate your profile from Facebook, Twitter, etc. A user can be looking for matches within 2 minutes. Further, the number of available potential mates is now effectively infinite, thus materially changing marginal and opportunity costs for market participants.

Because costs (physical safety, social stigma) have been disproportionately impactful to women, their elimination has had the effect of flipping the power dynamic in the market to favor women in prime reproductive age, though the dynamic changes with age.

You can see how big this change has been by looking at this graph that tracks how heterosexual couples met between 2009 and 2017. 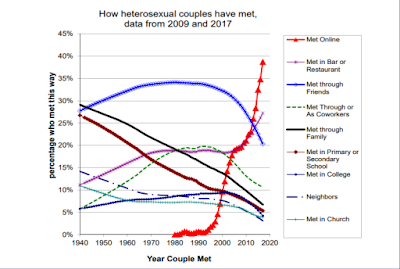 Why has online dating given so much more power to women?

Physical safety has been an ever-present issue for women in meeting potential dates, not to mention after agreeing to be alone with them on a date. In the era of online dating, women are at significantly less risk simply by not being in the immediate proximity of their prospects, and rejecting a prospect has no downside risk.

Women globally also have more upside potential because they can draw from larger prospect pools than ever before. Due to the significantly higher biological risks associated with reproduction, women are intrinsically far more selective when evaluating potential mates than males. In an online dating context, this selectivity is more apparent than ever, with significant knock-on effects for the rest of the culture. There is less pressure to "settle" than at any other time in modern history because of the availability of alternatives and the speed of interactions.


If you doubt that women are more selective than men in their evaluation of a mate take a look at these two charts from OkCupid.com data disclosures on how men and women view each other's attractiveness.

Men broadly rate women on something closely resembling a perfect distribution. A few 9's and 10's and 1's and 2's. A lot in the middle.


Compare that to how women rate men.


Yikes! There are a lot of guys walking around thinking they are an 8 or 9 when women see them as a 2 or 3. Women are clearly not from Lake Woebegon. They see almost all men as being below average.

Research in the past has suggested that the dominant risk for women has historically not been selecting a too low quality mate but the risk of not settling for an adequate mate and ending up alone. Looking at the chart above shows why that can be a substantial risk for women based on how they rate men. In their eyes, there don't seem to be many that measure up.

The thesis suggests online dating should make it easier for women to not have to settle. The pool of men is much bigger for them to explore. The author of the thesis also believes that is the reason why the males at the bottom of the 18-30 age range are not getting any action. In economic terms, these guys have effectively been disproportionately "priced out of the market". There are no takers for what they have to offer. Why would a woman take a chance on a lower tier guy when it is much easier to just keep looking online?

However, all is not lost for these guys on the bottom rung. Age will eventually work in their favor.

In addition to this, the rates of partnership for both genders is fastest between 20 and 35, going from 50% to 90%. This means that as female market participants move from age 20 to age 35 their available inventory to select from may shrink to a small minority of the original pool. Male market participants face a virtually unchanged opportunity set, if not an increasing pool of opportunities.


This generally means that between the ages 30-35 both men and women today have reached the point that it is time to place their long-term bets on a mate.

Between ages 30 and 35, both male and female cohorts are highly predisposed to forming long term partnerships due to visibly shrinking opportunity sets from the female perspective and general exhaustion and expectation rationalizations from the male perspective.


You can see these effects in this chart that shows the odds of being married at least once at various ages. This graphically shows how the ages of those marrying has been extended. You can also see that the gap between today and prior years narrows markedly between the ages of 30-35. 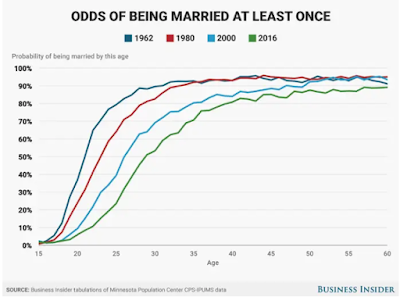 The good news in this is that dating market participants are making better informed and more thoroughly vetted choices versus historical norms. This should result in a reduction of the divorce rate in the long-term.

In fact, early indications are that divorce rates have been declining since the introduction of the iPhone and dating apps. This chart shows the one-year aggregate probability of divorce for newly married women since 2008. 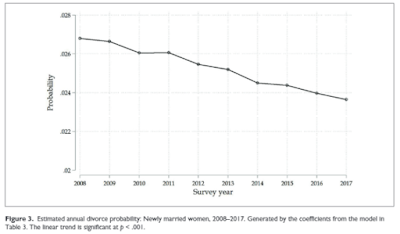 When I posted the original chart and asked why, I posed several possibilities of why the share of those between 18-30 were getting no sex?

These are the possibilities I suggested.

Harder to do it when you are living in your parents' basement?

More women having sex than men. Are they only doing it with men over age 30?

It seems I was not far off if this hedge fund manager is correct in his thesis.

I asked you to ponder this yourself.

You have more to ponder now. That especially applies to any of you men reading this who believe that they are "better than average" in attractiveness to the opposite sex.
Posted by BeeLine at 12:44 PM