The Iowa caucus is February 3 and Super Tuesday is March 3 when 13 states will have primary elections. 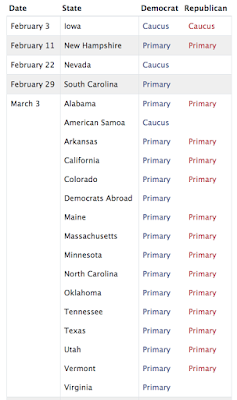 In 90 days we should have a much better idea of who the Democrat nominee for President will be.

The reality of Presidential primary politics is that the field narrows naturally over time as there is only so much money, organizational talent and voter support to go around.

We have already seen that occur in this race despite the fact that we are still two months away from the first votes. Which announced candidates have already dropped out? I count thirteen with Kamala Harris just announcing today that she is suspending her campaign.

In the meantime, two candidates (Deval Patrick and Michael Bloomberg) have recently announced their candidacy, which is highly unusual at this late date. That alone must say something about how strong the remaining Democrats in the field are perceived right now.

By my count, that leaves 15 candidates still in the race.

The first tier of candidates clearly includes Biden, Sanders, Warren and Buttigieg. They are the only candidates polling in double digits.

I looked at the five polls (Economist/YouGov, CNN, SurveyUSA, Quinnipiac, Politico/Morning Consult) that were released last week on the Democrats and averaged them to show the relative strength they have with voters right now.

The second tier includes Yang and Bloomberg (and Harris before she dropped out).

The remainder of the candidates (Booker, Klobuchar, Steyer, Patrick, Gabbard, Castro, Bennet etc) are polling at 2% or below.

Let's assess the top tier of the Democrat field. It is readily apparent that each has major deficiencies they bring to the task of defeating Donald Trump.

I am not one to believe that Trump is poised to win in a landslide. Trump has clear vulnerabilities and the right Democrat could beat him in the divided political world we live in today.  However, all of these candidates also have vulnerabilities, not the least of which are their positions on a number of issues that seem to be outside the mainstream of most of the American voting public.

A few observations on each of the top candidates as I see them right now setting aside policy considerations.

Joe Biden
Biden is 77 years old and, if elected, would be the oldest President to ever be sworn in at age 78. He is gaffe-prone and you have to think that this alone will be his undoing at some point. He also has the entire specter of his son Hunter's behavior hanging over his head. Hunter earned millions by serving on the board of a Ukranian gas company while his father was VP but now claims he has little money to pay child support for a child born from his relationship with a DC stripper? Biden is the strongest candidate in the field? If he is, it is only because the rest of the field are so far left that good old Joe looks pretty good in comparison. That is hardly the stuff of a strong candidate to challenge Trump. An important question--will Biden implode before or after the Democrat convention? I have to think it is inevitable.


Bernie Sanders
Bernie is 78 years old and will be 79 next year. His age has become more of an issue since Sanders had a heart attack recently that briefly took him off the campaign trail. Sanders is not even officially a Democrat. He describes himself as a Democrat Socialist or Progressive. He was elected and has served in the U.S. Senate since 2007 as an Independent. Sanders honeymooned in the Soviet Union so he comes by his leftist leanings legitimately. Sanders has very strong core support among the far left wing of the Democrat party. Young voters were particularly drawn to his challenge to Hillary Clinton in 2016. However, he has never had much support from African American voters. Does Sanders also have what it takes to appeal to Middle America voters, particularly in the swing states that Democrats need to win to defeat Trump? I think Sanders might have been able to defeat Trump in 2016 if he had gotten the nomination. Much more is known about both candidates today. Trump looks better to the average voters, Sanders looks worse based on what the economy has done since then. The last three years have not been kind to Bernie Sanders.


Elizabeth Warren
I continue to be shocked that Warren has done as well as she has thus far. I had given her up as politically dead after the disclosure that a DNA test showed she was 1/1024 Indian after claiming for years she was an American Indian to further her career as a law professor. Warren does have the advantage of being polished on stage and is younger (age 70) than both Biden and Sanders. However, it remains to be seen how she believes she can become President while attacking three of the core components of the traditional fundraising base of the Democrat base---Wall Street, Silicon Valley and the uber-wealthy. Warren's poll numbers recently have been in free fall as many of her big spending plans for Medicare for All, forgiveness of student loans, etc have come under more scrutiny. The entry of Michael Bloomberg into the race appears to have been principally motivated to keep Warren out of the White House by Wall Street players. Will we see Warren slowly get squeezed out by Bernie, Bloomberg and Buttigieg?


Pete Buttigieg
There were many who thought Barack Obama did not have the experience to be President. What must they think of Buttigieg? It is interesting to consider that Buttigieg (37 years old) is less than half the age of both Biden and Sanders. His only public office experience is as Mayor of South Bend, Indiana which has a population of 100,000. He garnered only 37.5% of the vote when he ran as the Democrat candidate  for Indiana State Treasurer in 2010. Mayor Pete does have an impressive resume--Harvard degree, Rhodes scholar, service as an Naval Reserve intelligence officer with a tour in Afghanistan. His youth is an obvious advantage with a Democrat electorate that trends younger than the GOP. However, is the country ready for an openly gay President who would bring a "First Husband" to the White House before we have had a woman President? Buttigieg also seems to have lukewarm support among the African American community. Buttigeig may rise to the top as the older candidates fall by the wayside. Being the "fresh face" has generally been more important than experience and competence with Democrat Presidential primary voters in the past. Is Mayor Pete that guy in 2020?


Michael Bloomberg
I am going to add Michael Bloomberg to the top tier for the simple reason that you don't disregard anyone with a net worth of over $50 billion who has stated he is willing to spend a good portion of it in getting elected. Bloomberg is barely registering in the polls right now but he just got in and most voters are not very familiar with him. Bloomberg appears to me to be someone who would especially benefit if Biden falters. I can't see many Biden supporters embracing Warren or Sanders. Buttigieg's inexperience has to also give them pause. Bloomberg is a natural choice, especially with that bankroll behind him. Then again, Bloomberg has the same age problem that Warren and Sanders have. He will be 78 in February. Bloomberg was also twice elected Mayor or New York City as a Republican. Bloomberg is also Jewish (as is Sanders). Let it not be forgotten that to this day we still have had only one Catholic elected President not to mention no one of the Jewish faith ever being assuming the office. Bloomberg is also not the kind of guy who is going to get many people excited on the campaign trail. Can he counter the Trump rally effect with competence to counter the Trump's charisma? Does that motivate people to vote?


I am looking forward to the next several months to see how Democrat voters assess these candidates when it it their turn to vote in each state.

There would seem to be little doubt that the principal attribute that Democrat voters are looking for is that person that can beat Donald Trump. Everything else is a distant second. It was no different than it was for GOP voters in 2012 (Obama) or 2016 (Hillary Clinton). It seems right now that most Democrats think that is Joe Biden.

However, running against Trump is a unique experience that is difficult to prepare for. At this point four years ago there were not many who predicted Trump would be the nominee. I saw the appeal of Trump but did not think he could convince enough GOP voters that he could win in the general election. This is what I wrote almost exactly four years ago today.

Trump has energized the race. He says things that many voters think but would never say. There is a lot of bluster and some blarney in him as well. He's like the "bad boy" that a lot of girls would like to date. However, will they marry him? His poll numbers look good in the dating phase we are in right now but are GOP voters going to commit to him long-term in the voting booth? That is a commitment I am not ready to make and my bet is that will be true for a majority of GOP voters in the end.

A friend and I were recently discussing the Democrat field and he asked me hypothetically who I thought would have won the GOP nomination in 2016 if Trump had not run.

That is a great question. It is difficult to answer because running against Trump is not like running against any other politician. You know how it is said that no battle plan survives the first contact with the enemy? How would Jeb Bush have fared if Trump had not kept referring to him as "Low Energy Jeb" or Marco Rubio as "Little Marco" or Ted Cruz as "Lyin' Ted"?

In other words, it is one thing to run in the Democrat primary. It will be something altogether different to run against Donald Trump. It will be a political war that I doubt any are truly prepared for.

Is any Democrat up to the task?

Democrat voters must decide who that is in the next several months.