Life used to be fairly simple.

It was generally acknowledged that there were men and there were women.

It was known that there were those who were gay (or possibly bi-sexual) but it was also known that this was a very small portion of the population.

This changed over the years due to movies and television shows from Hollywood that had gay characters and news media reports disproportionately focusing on gay rights, gay marriage and gay issues.

The result is that, even though most estimates still suggest that gays and bisexuals make up no more than 4% or the population, people believe that the number is much higher.

For example, a Gallup survey from 2015 found that when the American public was asked to estimate the number of gays and lesbians in the population, the average answer was 23%. 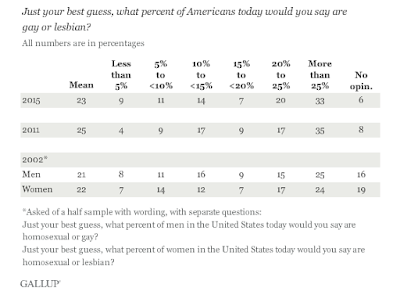 33% of people surveyed believed the number to be more than 25%. Only 9% correctly state that the number is less than 5%.

The whole issue has gotten more complicated in that we are not just talking about sexuality today. We have entered into an era where the science of two genders is also now being questioned every day.

This chart may help you keep up with all that is necessary to stay current on the topic. 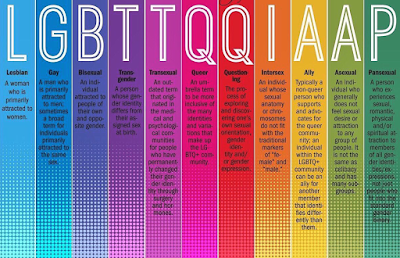 I used to think that the holy grail for gay and other activists in this area was to have science once and for all determine that homosexuality was genetically determined. If people were "born that way" it makes it very difficult to question the lifestyle or behavior of any individual. It makes other people much more sympathetic than if the behavior is a choice.

I was surprised to learn not long ago in a sermon by my pastor that some in the gay community, transgenders and others, were no longer interested in proving they were "born that way". They increasingly look at that view as denigrating "their choice". People in these communities see themselves living their truth through their choice and who they choose to be.

USA Today did a story on the background behind this change a couple years ago.

Getting America to believe that people are born gay — that it’s not something that can be chosen or ever changed — has been central to the fight for gay rights. If someone can’t help being gay any more than they can help the color of their skin, the logic goes, denying them rights is wrong. But many members of the LGBTQ community reject this narrative, saying it only benefits people who feel their sexuality and gender are fixed rather than fluid, and questioning why the dignity of gay people should rest on the notion that they were gay from their very first breath.


Not long after learning this I came across a story about doctors and scholars at Johns Hopkins University who recently published a 143-page report that concludes that there is insufficient scientific evidence to suggest that gay, bisexual or transgender people are born that way.

"Studies of the brains of homosexuals and heterosexuals have found some differences, but have not demonstrated that these differences are inborn rather than the result of environmental factors that influenced both psychological and neurobiological traits," the report reads." One environmental factor that appears to be correlated with non-heterosexuality is childhood sexual abuse victimization, which may also contribute to the higher rates."


An interesting part of the research was the study of 3,826 identical or same-sex fraternal twin pairs to see if any gene could be found that predetermined sexual orientation. Only about one in five sets of male and female identical twins that were studied resulted in both twins being same sex attracted. In sets of fraternal twins it was even lower.


In this way it appears that homosexual or transgender behaviors may not be much different than other things like drinking, drug use, gambling, adultery and other behaviors.

I think the research is clear that some people have a greater genetic predisposition to addictive behaviors than others. Some become addicted. Some don't. Some overcome it. Some never let the temptation get the best of them in the first place.

We often hear alcoholism referred to as an illness. The same with other addictive behaviors. However, you do not hear anyone saying that these are "normal" behaviors.

I am not sure where the LGBTTQQIAPP activists are heading with their push back on "born that way".

I also don't know the answers to the following questions but it seems we should be seeking the answers.

If we are to believe any of this is "normal" doesn't it have to be shown they were born that way?

If they weren't born that way is it not some type of mental illness or abnormality?

How can behaviors exhibited by less than 5% of the population be considered normal if they were not born that way?

I have no doubt that much more research and study will be done to determine these answers.

I have no ill will against anyone. I also try not to judge anyone. The Lord Almighty will judge us all. We are all human beings with failures. What an adult does in the privacy of their home is their business.

We live in an age when people want us to respect their truth.

I am more interested in following and respecting the truth.

One thing that is true is that for thousands of years of human history the type of behaviors that are being promoted by the LGBTTQQIAPP activists have been considered sins by many religions around the world. At the very least, they have been considered abnormal behaviors. Is that a "truth" that we now find to have been wrong only within the last couple of decades? If so, where is the science that supports that new "truth"?

I am quite sympathetic to the argument that I have heard from gays and others who strongly believe this is who they are and have been since childhood. They persuasively argue that they would not choose that lifestyle and suffer the discrimination and disdain they encounter that goes with it. However, I am waiting for the science to back them up. This recent study pretty strongly puts their argument on the wrong side of science right now.

It will be an interesting subject to keep our eyes on in future years to see if we get better answers.

Those answers could also lead to much different views on this subject.

We may find that, indeed, there is a genetic reason for every LGBTTQQIAPP person to claim they were born that way.

We may find the opposite.

Is there a real truth?