I don't follow British politics very closely. I know that the UK uses a parliamentarian system and over the years I have been familiar with some of the leading English politicians. I know something about the policy positions of the major parties. I am hardly a keen observer of the British political scene.

Despite that disclaimer, I have found it interesting that the electorate of the United States and the UK have followed somewhat similar cycles in their voting patterns over the last 40 years.

Ronald Reagan's election in 1980 in the United States ushered in a completely different era in American politics. Before Reagan, conservative views were at the fringes of the body politic. There was very little difference between a lot of Republicans and Democrats. In fact, many Democrats in the 1960's and 1970's from the South and West were more conservative than Republicans from the Northeast and Midwest.

The United Kingdom suffered economic malaise in the 1970's. The economy was struggling, inflation was high and labor union strikes were common occurrences. Many large industries (rail, airlines, public utilities) were owned by the British government.

By 1979, the Labour Party had been in control of the British government for 12 of the previous 15 years before Margaret Thatcher took control with the Conservative party. Thatcher set about privatizing most of the government-owned businesses and the British economy started to recover. Thatcher would serve for almost 12 years.


A year later Ronald Reagan won in the United States. He served for 8 years and was followed by George H.W. Bush who some would describe as Reagan lite. Thatcher was succeeded similarly by Conservative John Major who was more mild-mannered and moderate than Thatcher and served 6 years. It is hard not to see the similarities between Reagan/Bush and Thatcher/Major.

Major was followed by Tony Blair of the Labour Party in 1997. Many at the time saw many similarities in the style of Blair to Bill Clinton who was elected in 1992. Clinton went on to serve 8 years and Blair led the UK for 10 years to be followed by Labour's Gordon Brown for 3 years.

In the meantime, George W. Bush returned the White House to the Republicans for two terms and the UK returned to Conservative rule in 2010 which they have held to this day with three different Prime Ministers--David Cameron, Theresa May and Boris Johnson. The only thing missing was a Barack Obama figure to rescue the Labour Party in Great Britain.

We now have Donald Trump and Boris Johnson who share a lot of the same similarities. They are brash and at uncouth at times . They are not always politically correct. However, they favor populism over elitism and nationalism over globalism. You could say both are imperfect. However, they both benefited by running against opponents who were even more flawed.


There are a lot of parallels looking back over those 40 years. As I have said in these pages in the past, history may not repeat but it surely rhymes. You can say the same thing looking at the last 40 years of politics in the UK and USA.

Of course, the defining political moment in both the UK and USA recently were the events of 2015 and 2016.

In a national referendum in 2015, UK voters chose to leave the European Union (Brexit) shocking the political class and media elites. Similarly, Donald Trump did the same thing by winning the Presidency in the United States on a populist and nationalist agenda.

Both countries have been in various forms of political chaos since those votes, in large part due to the fact that the political and media elites seem to have not been able to process the fact that average working people do not share their elitist, globalist views.

In the UK last week, the Conservatives gained 47 seats in Parliament giving them 365 total seats. Labour lost 59 seats. Labour had held some of those seats for over 100 years. It was the worst overall result in 84 years. 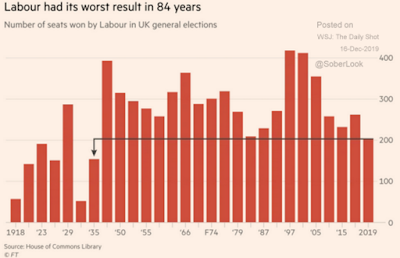 The extent of the blind eye that the elites have compared to election results reality is revealed when you compare the predictions of Conservative party gains in the 2019 election compared to the final tallies.

It seems that the "smarter" you are only means that you are the furthest removed from reality as this tweet I saw after the election on Twitter demonstrates. The most interesting parallel between the two countries is the extent to which each party that was traditionally considered the representative of the working people (Labour in UK, Democrats in USA) have slowly abandoned that constituency in favor of a globalist and progressive agenda.

You can see it in these next few graphs that compare voting patterns in the two countries. 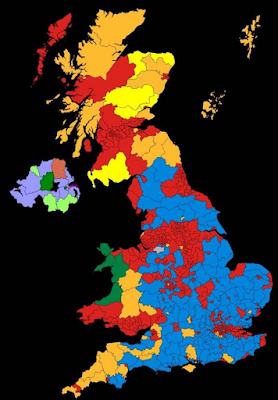 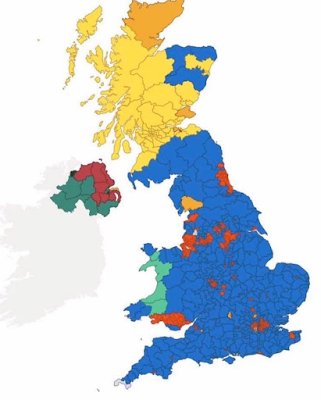 Labour member in the House of Commons continue to hold seat in a few isolated pockets in the country.

This is also what has happened in the United States between when Bill Clinton was re-elected in 1996 and the election of Donald Trump in 2016.

It is beyond me why the same colors cannot be used in both countries to signify liberals and conservatives. I guess it is why we also drive on opposite sides of the road! 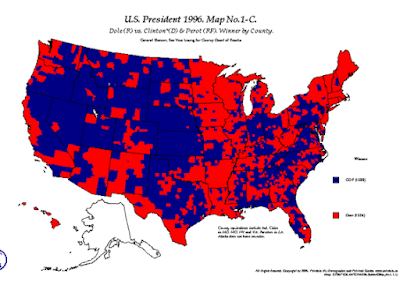 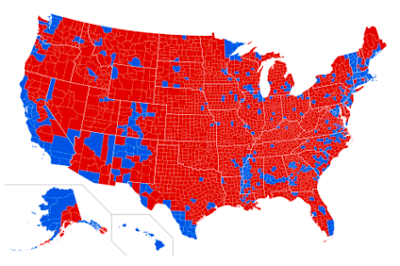 Democrats have increasingly become a party that only represents coastal urban areas and counties along the border.

Do you see some similarities here?

You also see the same age-based division in the UK as in the United States. Young voters tend to be liberal. Older voters are more conservative. However, that age divide is much greater in the UK than in the USA.

Look at this distribution of the vote in the UK by age.

Do you think those chronologically advantaged voters might remember what it was like back in the 1960's and 1970's in Great Britain? 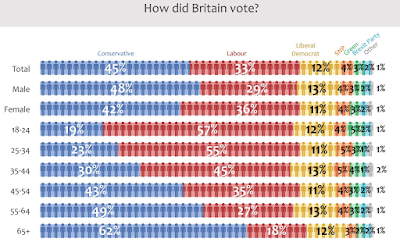 This is what the UK electoral map would look like if 18-24 year olds were the only votes that counted. 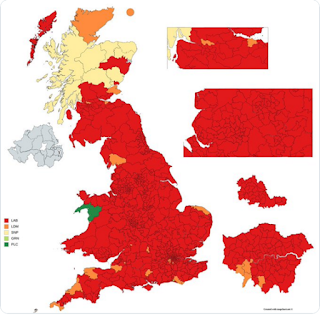 This is the age distribution in the 2016 election between Clinton and Trump. You see that same general trend by age (younger--Democrat, older-Republican) but it is not as pronounced in the UK)

Implications for US Election in 2020

Are there any takeaways from the British general election that might give us a clue of where we are headed in the United States in 2020?

First and foremost, as I have stated many times in these pages, the voters are sovereign in the American political system. The same is true in the UK. The people ultimately determine the government that they want.

Politicians who disregard the will of the people do not survive in the long term.

The people spoke previously that they wanted Brexit. The Labour party didn't believe it. You would have to believe they understand it now.

The Labour party agenda also veered very far to the left. Much too far left for almost anyone but hard core socialists.

To make matters worse, the leader of the Labour party, Jeremy Corbyn, was considered "profoundly personally unpopular" by many (he had a -40 approval rating in recent polls) due to a mix of the radicalism of his views and increasing anti-Semitic sentiments in his party.

Countries that are as divided politically as the United States and Great Britain have been recently do not stay that way forever. One party eventually wrests control over the other as the voters tire of division and inaction and come down on one side or the other. When they do they want decisive action on those things that they deem most important.

That appears to be what occurred in the UK last week. There should be no mistaking what the people want regarding Brexit with their vote last week.

The losing party must adapt or die.

I see Trump following a very similar script to what Boris Johnson and the Conservatives have done in the UK.

In the end, Trump will most likely be much closer to the center, and the heart of the average American voter, than any Democrat will be. From where the Democrats are now, it is a long way to get to the point that the American middle class worker believes they are on their side.

The UK election illustrates that.

I am sure Trump understands that better than anyone.

The UK election results should tell Democrats that ignoring the lesson learned by the Labour Party last week carries considerable risks to their future prospects.

The actions by Democrats this week involving impeaching President Trump on trumped up charges indicates that they are not paying much attention to what has transpired in the UK election last week.

My advice to Democrats---proceed at your own peril. The voters are watching and in the end they will have the final say. They always do.