A Drink, a Pizza and a Tree

It has been a tough week of news. We found that the top leadership of the FBI apparently was thoroughly corrupt in an investigation of a Presidential candidates campaign. We have seen House Democrats abuse their power in a rush to impeach a duly elected President without citing any crime. We are still awaiting the final results of the UK general election but early returns suggest that Boris Johnson and the Conservatives have gotten a boost and Brexit is closer to reality.

I thought it best to end the week on a less serious side and highlight some interesting information that has nothing to do with politics. How about some data on booze, pizza and trees?

We often hear how bad things are around the world. However, alcohol consumption is generally declining almost everywhere. It does not appear that people are drinking their troubles away.

There has been no greater reduction in drinking than in Russia. Austrians, Irish and the French now drink more than Russians. In 2007  no one could put them down like the Russians. Alcohol consumption per adult has decreased almost 40% over the last decade in Russia. Is Putin doing something right? 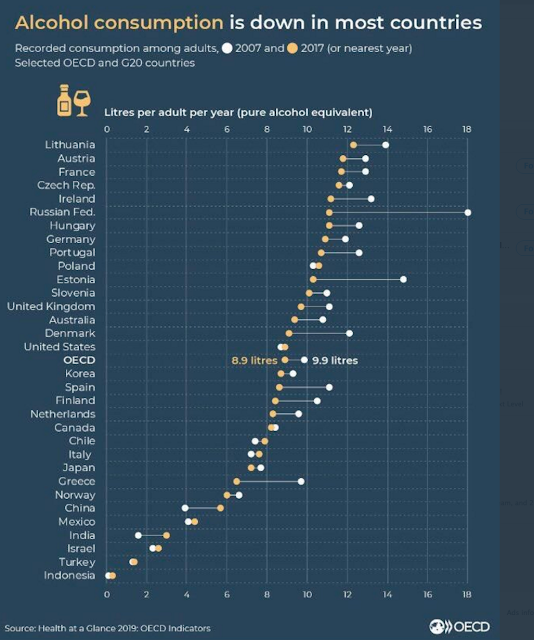 These charts show the locations of all the major pizza chains in the United States. It is still easier to find a Pizza Hut than any other pizza restaurant.

All the charts are from DataIsBeautiful/BoMcCready. 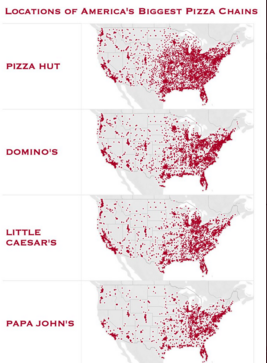 Domino's and Little Caesar's were both founded in the Detroit area.

I found it interesting that up and comers Marco's, Hungry Howie's and Jet's all have their biggest concentration of stores in the that area. They must really like their pizza in the Great Lake state.

There are a lot of environmentalists running around saying that we are destroying the planet. However, when it comes to trees, there is actually more forest cover in the United States than there was one hundred years ago. This is despite the fact that the population has increased three-fold in that time to an estimated 330 million people.

The chart below shows the percent of each state covered in forests.

89% of Maine is covered in forest. Only 2% is covered by forest in North Dakota.

It is pretty startling to see how forest-covered the Northeast and Southeast are when considering the population in these regions (and the number of pizza restaurants)!

My suggestion for you this weekend is to forget the depressing news coming out of Washington, D.C. by grabbing yourself a drink, ordering a pizza and building a fire from the wood in all those trees. 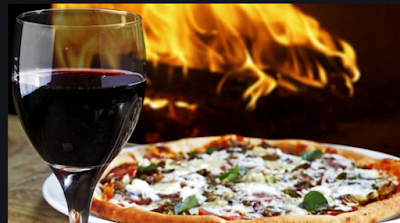 Next week will come soon enough.
Posted by BeeLine at 8:45 PM