The Inspector General Report on FBI's conduct during the FISA application process to investigate Trump campaign associates has been released. 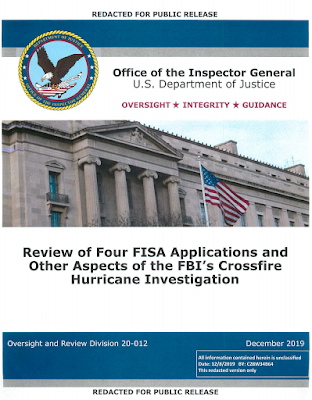 As was the case with the IG Report involving the Hillary Clinton private email server, this report also finds significant deviation from FBI protocols but states it found no political bias from FBI personnel.

This is pretty much as expected coming from what is a Justice Department bureaucrat who is normally looking at internal errors who then makes recommendations to fix the problem in the future.

It is important to note that the IG found 17 significant errors in the FISA process. The report details numerous violations of procedures, omissions of exculpatory evidence and reliance on discredited evidence as they sought approval to spy on Trump campaign associates.

This is how the Associated Press described the report. They called those errors "performance failures".

First, consider of the 17 listed "performance failures" how many were to the benefit of those in Trump campaign who were being investigated? NONE. What are the odds that these were mere innocent mistakes?

Second, how did the IG determine there was no political bias? Here is what the report says.

"We did not find documentary or testimonial evidence that political bias or improper motivation influenced the decisions to open the four individual investigations."


In other words, no one wrote anything down on paper or they answered "No" when asked whether political bias entered into their decision to investigate and surveil Trump campaign associates.

Does any of this make any sense?

Why would high level FBI personnel open an investigation of Trump campaign associates and then lie and cheat to surveil people if there was no political bias? Why else would they do it considering the career risk they took in doing it?

You can ask the same question about the FBI activities in the Hillary Clinton investigation where they broke every rule on the books and ignored evidence in plan sight to conclude Clinton had no "intent" to break the law. Why would they do that unless there was political bias involved?

It was also no surprise to me that the IG concluded that the FBI had a reasonable predicate to begin the investigation of Trump and his campaign. This is something I predicted previously would occur.

The IG stated that the investigation was initiated after the FBI received a tip from a friendly foreign government that someone associated with the Trump campaign (George Papadopolous) had indicated that the Russians had informed the Trump team that they might be able to assist with information damaging to Hillary Clinton. The IG concluded that it was entirely reasonable for the FBI to follow up on this tip and begin an investigation.

The problem was that the FBI was  never able to confirm this "tip". However, they proceeded with the investigation anyway. In trying to get the goods on the Trump campaign they ended up relying on the Steele dossier for the FISA applications which they did not verify That was just one of many problems with their "investigation".

As the AP did in its headline, you could stop here and conclude that the IG Report is a nothing burger. Par for the course in Washington. A lot of misdeeds with no one being held accountable.

However, shortly after the release of the IG Report, US Attorney John Durham, who has the legal authority to actually prosecute people for wrongdoing rather than merely point out "internal mistakes",  released a statement that included this quote.

Based on the evidence collected to date, and while our investigation is ongoing, last month we advised the Inspector General that we do not agree with some of the report’s conclusions as to predication and how the FBI case was opened.” (emphasis added).


In my view, that statement from  Durham was the most significant disclosure of the day. It is much more important than anything in the IG Report for the simple reason that Durham has much broader investigative powers as well as the power to actually indict people and bring them into a court of law.

Durham's statement seemed designed to cut off at the pass those in the media and others who might want to use the IG Report to claim that everyone in the deep state had been exonerated. It seems to be a clear message that another shoe may yet drop. The story is not yet over.

Right about the same time Attorney General Barr released a similar statement including this quote.

The Inspector General’s report now makes clear that the FBI launched an intrusive investigation of a U.S. presidential campaign on the thinnest of suspicions that, in my view, were insufficient to justify the steps taken.  It is also clear that, from its inception, the evidence produced by the investigation was consistently exculpatory.  Nevertheless, the investigation and surveillance was pushed forward for the duration of the campaign and deep into President Trump’s administration.  In the rush to obtain and maintain FISA surveillance of Trump campaign associates, FBI officials misled the FISA court, omitted critical exculpatory facts from their filings, and suppressed or ignored information negating the reliability of their principal source. (emphasis added)


That is pretty strong stuff coming from the Attorney General and a U.S. Attorney specifically charged to investigate crimes related to this FISA abuse. It is hard to imagine that they would go out on a limb with these kinds of statements unless they feel pretty comfortable that this story is not over by a long shot.

What is most significant is that while the Justice Department IG had set boundaries for his investigation that did not go beyond his individual department, Barr and Durham are looking at other players in all of this that might include the State Department, CIA and Defense Department.

Where does this do from here?

You never know for sure but if I were former CIA Director or  FBI Director James Comey I might not be sleeping very well tonight.

These are the big questions that I still have.

What if that friendly foreign government source who fed the Russian story to the FBI about the Trump campaign actually was planted by the CIA with that ally?

What if Papadopolous was being entrapped by an operation that was initiated by the CIA or someone else in the Obama administration? He claims he was.

Could it be that the entire Trump/Russian collusion story was a CIA operation designed to entrap Trump and his campaign?

Did we have a current American Presidential administration conspiring and colluding to prevent a Presidential candidate from the opposite party from taking office?

These are questions that deserve answers.

In the meantime, anyone who takes joy in what came out in the IG Report today should seriously reconsider their priorities and patriotism.

At best, the FBI's reputation has been deeply tarnished. It will not be easy to rebuild trust in this institution that is supposed to be committed to truth and justice before anything else.

At worst, we have the biggest political and governmental scandal in the history of the United States.

Much more remains to be revealed.

However, I can't help but compare the Trump impeachment inquiry that is ongoing with what occurred in the Trump campaign investigation.

The case for Trump's impeachment appears to now be that Trump has ill intent even if they cannot produce any evidence of wrong doing. He may not be guilty of anything yet but if he is allowed to stay in office he will be guilty of something. As a result, he needs to be impeached and removed from office before he can serve another term.

On the other hand, The IG Report on FISA concluded that there was plenty of evidence of wrongdoing on the part of the FBI but somehow there was nothing to show they had any ill intent. Therefore, they are not guilty of anything.

What else do you need to know that something is deeply disturbing within the Deep State?

It now remains for John Durham and Bill Barr to get to the bottom of this and bring any guilty parties to justice.

We can only hope that justice will be served to those who deserve it.