The House impeached President Trump last week but Speaker Pelosi stated that they would not be delivering the articles of impeachment to the Senate for a trial.

It is a curious strategy in that the House pushed through the impeachment by stating that they could not wait one more day before impeaching Trump because he represented such an imminent threat to the country and the Constitution.

Does that make any sense at all?

The only way this makes sense is to understand that Nancy Pelosi and House Democrats were trapped in a political mess of their own making.

The far left wing of the Democrat party had been pushing for Trump's impeachment practically from the moment he was sworn in. Pelosi had pushed back on this notion for months stating that she would not be in favor of impeachment unless there was "overwhelming and bipartisan", support for pursuing it.

The final count---not one Republican voted for impeachment.


This is as I predicted a month ago in what I referred to then as the "Hail Mary Impeachment". This entire process seems to be mostly about tarnishing Trump before the 2020 election than anything else. The fact that Pelosi is refusing to forward the articles of impeachment to the Senate further confirms that.

The worst thing that could happen to the Democrats now would be for the Senate to "acquit" Trump. That destroys their narrative. They want a permanent cloud over Trump's head.

However, Pelosi and the Democrats have now put themselves in another box. Every day that goes by that those Articles are not forwarded to the Senate makes this process look more and more as  a political sideshow to more and more voters.

At the same time, every day this carries on, means that the inevitable Senate trial will encroach more on the Democrat primary process. This will necessarily draw attention away from the Democrat candidates making it even more difficult to defeat Donald Trump which seems to have been the primary purpose in all of this anyway.

The polls indicate that Trump has actually gotten stronger throughout the impeachment process. This has to be the exact opposite of what Democrats calculated when they started down this path.

Even CNN has noticed.

A recent poll by CNN released last week showed that Trump's favorable rating was at 46%. He was at 44% in October and 43% in June. Just as significant, Trump's unfavorable rating in the CNN poll has dropped by 4 points since the impeachment inquiry started.

It appears that the economy is a big reason for Trump's strength according to the CNN poll.

Overall, 76% rate economic conditions in the US today as very or somewhat good, significantly more than those who said so at this time last year (67%). This is the highest share to say the economy is good since February 2001, when 80% said so.

CNN pointed out how dramatic that surge has been in how voters are viewing economic conditions in the country in an on-air report. You have to imagine this was not an easy segment for CNN to "report".

One could look at Trump's approval rating at 46% and argue that he is still below 50% so why are the Democrats so worried? Why would they think they would need to do this "Impeachment Hail Mary" when the election is only a little over 10 months away?

Do you know what Trump's approval rating was in the last CNN poll before the 2016 elections?

His unfavorable was at 61%.

Guess what? He won with those approval numbers in 2016. What leads anyone to believe that 2020 voting results will be any different at this point?

CNN's poll does show that in a head to head voting match up, Biden is +5% over Trump, Sanders is +4%. Warren is +1% and Buttigieg is -1%. However, these are national poll numbers that would only equate to popular vote totals.

It is a different story when you look at the election on a state level which it will be due to the electoral college.

The most significant finding I saw in the CNN poll is the fact that in the group of 15 battleground states, that were decided by 8 points or less in 2016, there is not one Democrat who leads Trump.

One other chart captured my attention this week that I think is an important consideration as 2020 is almost upon us.

Two years ago this week, President Trump signed his tax cut bill. The Democrats voted against that bill in lock step in much the same manner as they voted for impeachment.

Exhibit 1 to refute that are the facts about the economy right now (record low unemployment, wage growth and record stock market prices) as well as the poll results above on how voters believe the economy is performing based on their personal experience. 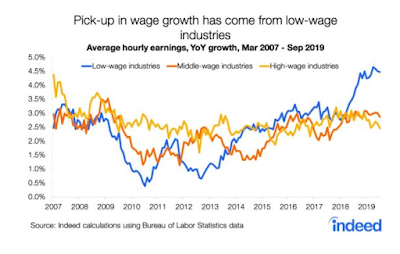 Where has wage growth been highest since Trump became President in 2017? It has been in low-wage industries. In particular, look at that wage growth since the tax bill was effective beginning in 2018.


Do you want to know why the Democrats can't wait for the next election for the American people to decide whether Donald Trump is unfit for office?

I suggest you start by looking at the chart above once again.

It does not get much worse than that if you are a Democrat right now.

They are truly boxed in on this Christmas.