On this day in 1903 the Wright Brothers successfully flew the first self-propelled, heavier-than-air aircraft.

I noticed some good natured humor on Twitter today on whether Ohio or North Carolina has the better case for claiming it was "first" in ushering in the airplane.

Both states have had license plates heralding their contribution to the history of aviation. 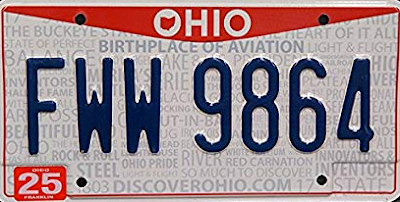 I was born and live in Ohio today but I have lots of family living in North Carolina so I am staying out of the scuffle.

Here is one of the tweets that I thought was pretty amusing. 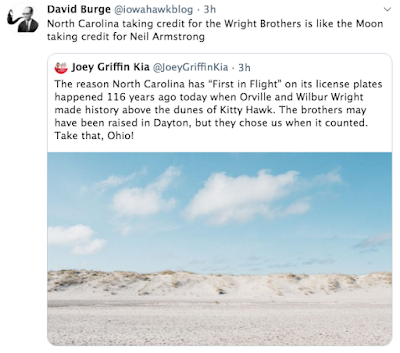 Of course, Twitter being what it is, someone had to jump on the Neil Armstrong reference with what they claim Armstrong said about the Ohio-North Carolina bragging rights battle. I have no idea if it is true but it is a great line. Not quite as good as "That's one small step..." but good nonetheless.

The one thing I will contribute is again publishing a blog post I wrote about the Wright Brothers in 2015.

It doesn't matter much which state claims it was "first". What everyone should really appreciate is what the Wright Brothers did and how they did it. It is a remarkable story of remarkable men.

On The Shoulders Of Giants
(originally published June 1, 2015)

I am just back from a vacation on the Outer Banks of North Carolina where my beach reading included the new David McCullough biography, "The Wright Brothers". 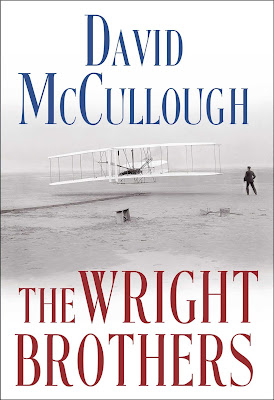 I could not think of a more relevant read considering the history that Wilbur and Orville Wright made on that wind-swept swath of sand dunes.

What those men accomplished is still awe inspiring. Even to my three-year old grandson who asked his mother as he flew from Texas to North Carolina, "How does this plane hold its weight in the air?"

People for thousand of years wondered if man could ever fly. Many thought it was impossible. In fact, Wilbur Wright told his brother in 1901 (two years before their success at Kill Devil Hills and two years after they had begun working on the challenges of flight) that men would not fly for 50 years.

It shows what passion, perspiration and perseverance mean to success. And Wilbur and Orville Wright used all three to change the world.

A few interesting observations from the book.

Orville's first grade teacher noticed him tinkering with bits of wood one day in class. When she asked him what he was doing he said he was making a machine which he and his brother would fly one day.

Did I say passion?

The Wright Brothers made every part, sewed every seam and assembled their aircraft after it was shipped from Dayton to Kitty Hawk. They also built their own building (combined workshop and living quarters) and hanger from scratch on the Outer Banks and had to haul every piece of equipment over four miles across those sandy dunes. They made three separate trips over three years to Kitty Hawk and Kill Devil Hills to understand gliding mechanics and flight control before ever attaching an engine and propellors to their aircraft. Every time they did a test flight they had to haul the aircraft back to its original starting spot.

Did I say perspiration?


Most knew nothing of the efforts of the Wright Brothers. They toiled in obscurity. Who would pay any attention anyway to a couple of guys who owned a bicycle shop who said they were going to fly? Most of those who did hear of their efforts thought they were crazy. In fact, the hometown newspapers in Dayton, Ohio did not even bother to send one reporter to cover the subsequent flight tests they were doing over the next several years in Dayton after their achievement in North
Carolina.

Did I say perseverance?

The story of the Wright Brothers is also another lesson in the limitations and ineptness that often attends government bureaucracy.

At the same time the Wright Brothers were working on the problems involved with flight the federal government was assisting a higher profile effort to the same end. $50,000 in public money was expended on the project in addition to another $20,000 in private funds. All to no avail.

The total cost of the Wright Brothers to succeed? About $1,000 out of their own pockets in addition to the sweat of their brow.

To make matters worse, the Wright Brothers were continually rejected by the federal government when they approached it with the airplane technology. After repeated rejections by the United States government their first sale was to France. In fact, the Wright Brothers initially were much more famous in Europe than they were in the United States due to the air demonstrations Wilbur did in Europe.

Sir Isaac Newton was known to have said,

"If I have seen further, it is by standing on the shoulders of giants."


This statement clearly applies to anyone who came after the Wright Brothers unlocked the mysteries of powered flight in 1903. It is truly breathtaking to consider the exponential advances in flight that followed their breakthrough in fairly short order.

By 1909, an airplane had crossed the English Channel.

By 1927, Charles Lindbergh had flown solo across the Atlantic.

By 1935, the DC-3 has been designed and built to carry regularly scheduled money paying passengers

By 1947, Chuck Yeager had broken the sound barrier in a supersonic jet.

It is incredible to think that Orville Wright lived to see all of this in his lifetime. He passed away in 1948 at age 77 .

Of course, by 1969 a man had walked on the moon. It just so happened that Neil Armstrong grew up in Wapakoneta, Ohio which was just up the road from Dayton.

Unfortunately, Wilbur Wright died in 1912 at the age of 45 due to typhoid fever which is typically caused by contaminated food or water. Less than 400 cases per year are now reported in the U.S. but it was a major public health issue in that era. Orville had almost died of the same disease in 1896 which is now fairly easily treated with antibiotics.

Thank God that Orville survived to work with his brother in bringing us the miracle of flight. And thank God that there are men like Wilbur and Orville Wright who dare to dream and are not afraid to perspire and persevere to propel us to new heights.

May my grandson and future generations have the same spirit and perseverance.