We are not only closing in on the end of another year, but on the close of a decade. At least, that is how most people think about it. Purists might argue we won't do that until next year.

There are a lot of people in this country who are not happy with the state of the United States right now.  Some are about to impeach the duly elected President despite the fact the voters have the opportunity to remove him in less than 11 months if they choose to do so.

There are other men and women in the Democrat party on the campaign trail to replace President Trump telling everybody how bad it is to live in the United States. Don't worry, they are going to make it a lot better.

This seems to be a good time to take a step back and assess where we are in the U.S. compared to the rest of the world. After all, as I often say in these pages, context is everything when assessing anything.

I follow Charlie Bilello on Twitter as he often provides excellent context as to what it going on in the investment world. I found the three tweets below to be especially helpful in thinking about exactly where we are right now.

Stocks, housing prices at all-time highs. Economic expansion and job growth are the longest in history. The unemployment rate is at a 50-year low.

You don't get a real appreciation of how great things are in the United States economically until you look at equity returns over the last 12 years (right before the economy turned toward the great recession in 2008-2009).

It should be remembered this was a global recession. Everyone in the world saw its effects. However, compare how the United States stock market came out of it compared to the rest of the world.

Yes, the stock market is not everything. Not everyone has benefited as much as those on Wall Street. However, people have 401(k's), IRA's and pensions. They have college funds. In addition, the wealth that has been created supports a lot of investment and business expansion. If you don't think it matters, think back to what things were like after the stock market cratered in 2008/2009.

John F. Kennedy famously stated that "a rising tide raises all boats." It is really true. 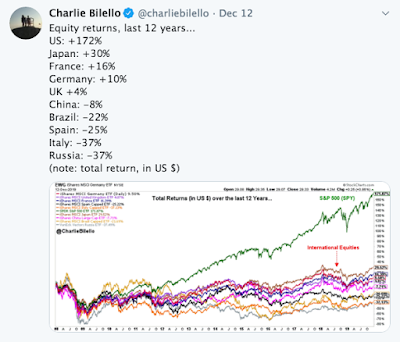 Notice in particular how much that gap accelerated since January, 2017 when Donald J. Trump became President.

One more tweet from Charlie showing that you literally could not lose in any major investment index sector in 2019 even if you tried. 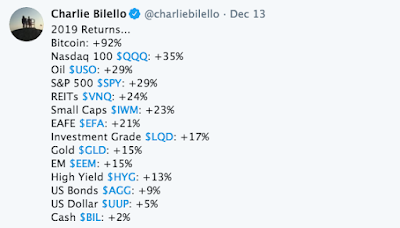 I can't think of how anything could get much better economically in the United States than it is right now. Everyone should feel incredibly blessed no matter what your political persuasion. I can assure you it will not always be this good. I can also assure you that there are a significant number of people who have no comprehension of how good they have it.

Count among that number those who are voting on the articles of impeachment of Donald Trump.

Pass this on to anyone who tells you had bad it is in the United States.

If they have a job, own a house or other real estate, hold any stocks or bonds, have a 401(k) or a pension, or have a gold chain around their neck, you might have them explain why they think it is so bad.

Where do they want to move to?
Posted by BeeLine at 8:35 PM