The Aging of Air Travel

I thought I would follow-up on my last post on "Remembering the Wright Brothers" with another focusing on the air travel theme.

Over my lifetime, I have travelled in the air well over one million miles. In fact, I flew most of the way across the country this week.


I flew a lot on business in my career and have seen many changes in the airline industry over that time.

For example, when I started flying, all air routes were heavily regulated. Airlines applied for and were granted permission by the federal government (Civil Aeronautics Board) to fly routes between cities. The CAB also controlled the right of new carriers to enter the market and had the power to regulate fares to passengers. This did not change until the Airline Deregulation Act was passed in 1978.

All airlines imposed weight requirements. In the regulated airline industry of the 1960's and 1970's the "look" of your flight attendants took on outsized importance as all the route fares were the same. Most passengers were business men. It did not take much for the airline's marketing department to figure out what they should focus on to try to get passengers in their seats.

Braniff Airways built an entire marketing campaign around the look of its flight attendants in the mid-1960's. One of the lines they used in their advertising was "Does your wife know you're flying with us'? Yes, really. 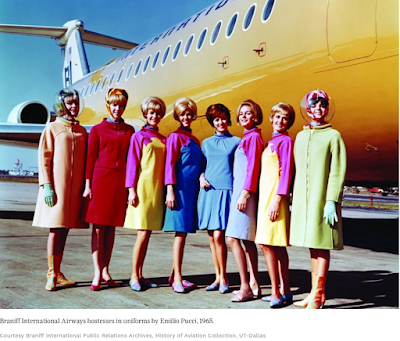 In the late 1960's the federal courts ruled that the age and marriage restrictions were discriminatory. 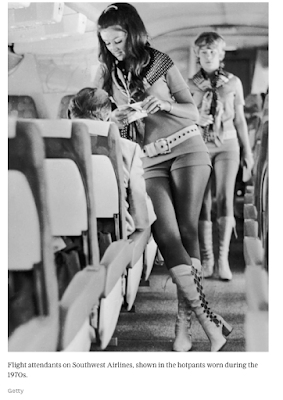 Times have changed and, most decidedly, for the better.

Why do I bring this all up?

I wanted to provide some context to an interesting story I saw recently involving a flight attendant for Delta Airlines who had been terminated and has filed a discrimination suit against the airline. This is the headline from the FoxNews.com story.

When you see a headline like this you know there has to be much more to the story.

The Daily Mail has a more detailed look at the background behind the story including an interview with, and pictures of, the flight attendant, Ida Gomez Llanos.

And quite a story it is.

It turns out that this flight attendant had been working for Delta since 1962 (she actually began with a regional airline Delta acquired) and had 56 years of service when she was terminated.

Despite that length of service the story stated she was still only the fifth longest-tenured flight attendant at Delta! Wow! There are other flight attendants pushing 80 or beyond?

Making $250k per year put this flight attendant with annual income about 5 times the average at Delta.

She says she was terminated because Delta wanted to replace her with a younger flight attendant who did not make as much money. It doesn't take a lot of imagination to see that might be a motivation here.

However, in reading her legal complaint, it appears that most of her problems centered around her fellow flight attendants, some of which seemed determined to undermine her and remove her from the seniority list.

Flight attendants with the most service get their choice of the best routes and Ida was working all of them out of Los Angeles. LAX to Sydney and LAX to Shanghai among them. Ida had the most seniority for flight attendants at Delta based at LAX. It also doesn't take a lot of imagination to see that some of her co-workers would like to see her no longer ahead of them on the seniority list.

Ida was fired after allegedly taking a milk carton off a flight in Sydney that she did not declare on the customs form. This came after she was on probation because of complaints from fellow flight attendants about her that seem more appropriate to a kindergarten classroom than the cabin of a 777.

It will be interesting to see where this ends up. Ida has asked for a jury trial but you have to think that Delta will settle this before then.

At the same time, you have to wonder whether eliminating age restrictions altogether for flight attendants was such a great idea.

Can a 78 year old really be counted on to do all the work and safety requirements that are necessary in a flight attendant?

My understanding is that airlines require its flight attendants to be able to operate and open exit doors in evacuation tests to retain their jobs. However, they can retake the test a number of times until they pass.

Perhaps it is time to have the FAA set a mandatory retirement age for flight attendants? The airlines would simply not able to do it unilaterally without getting sued or having union contract approval.

Than again, if we can have 77 or 78 year old men running for President who is to say we shouldn't have 78 or 79 year old flight attendants pushing a beverage cart down the aisle.

One thing is for certain---air travel has changed a lot since I took that first flight almost 60 years ago.