A Heck of a Week Ahead

It looks like we are coming to the end of the year with one heck of a week of news in sight.

The impeachment inquiry of the Democrats seems destined to have Articles of Impeachment voted out of the House Judiciary Committee on a party line vote this week.

What the grounds will be is still uncertain. The Democrats seem to have a different idea about that every day.

House Judiciary Committee Chairman Jerrold Nadler seemed to inadvertently reveal what is really behind this when he said this on CNN Sunday (as reported by Bloomberg.com.)

On NBC’s “Meet the Press,” Representative Jerrold Nadler, chairman of the House Judiciary Committee, said it was a “matter of urgency” to deal with the president’s pattern of behavior ahead of the next election. On CNN’s State of the Union, Nadler said Trump may try to “rig” the 2020 vote.


Trump is being impeached because he may try to rig the 2020 election?

Let me get this straight.

The Democrats are saying that a President can be impeached because of something they think he might do in the future?

Speaker Nancy Pelosi said something similar in her CNN Townhall appearance last week in which she said "Civilization itself is at stake in the next election."

What does the next election have to do with it? I thought this was about what Trump has done as President? Isn't Pelosi admitting this impeachment is all about the 2020 election rather than Ukraine, Russia or anything else? They are trying to prevent the voter from making their own choice in just over 10 months?

Isn't this getting a little ridiculous?

Of course, all of this impeachment talk might have been engineered specifically to keep the public's attention away from the second item of news that is breaking this week---the report of Justice Department Inspector General Horowitz on possible abuses of the FISA process by FBI and Justice Department officials in spying on the Trump campaign.

The use of surveillance tools against American citizens is supposed to be extremely limited and the process to get a FISA warrant to do so subject to strict rules to prevent abuse and the violation of civil liberties. A special FISA court must be used for these warrants and extraordinary measures are supposed to be used by the FBI to allow this surveillance.

Were those procedures followed in the case of FISA warrants against individuals in the Trump campaign?

Was there a reasonable predicate to even initiate the investigation or was this done principally to keep Donald Trump out of the White House?

Will anyone be held to account if rules were bent or broken to try to get Trump or entrap people in his campaign?

What we do know is that a U.S. Attorney (John Durham) has opened a criminal investigation based on what we are told are some of the conclusions in that report.

Will there be criminal indictments following the release of the report?

There is a lot riding on this report. There have been few leaks and those that have come out from the mainstream appear to have been planted in order to get ahead of the story and suggest there is not much here. Others suggest that it reveals a coordinated effort within the Justice Department (and possibly including the CIA and others) to spy on Trump and prevent him from becoming President.

Whatever way it goes it will be big news for someone.

If all of that US news is not enough, the UK also has its general election this Thursday in which it will elect members of Parliament that will result in the selection of the Prime Minister.

The Conservative Party led by Boris Johnson seems to be leading in the polls right now.

The fate of Brexit may also be tied to this election as Boris Johnson wants to proceed with a deal to leave the EU that he negotiated.  Liberals generally want to remain in the EU, or at a minimum, have another vote.

We will know more at the end of the week.

In the meantime, I found this additional polling to be particularly interesting in how different age groups intend to vote by age group for the two the major political parties in the UK. 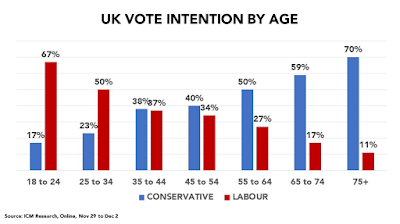 Would you say there is a generational divide in the UK?

Could it be that those young voters do not remember much of what a economic basket case the UK was in the days before Margaret Thatcher started dismantling the socialist economy and privatizing scores of government-owned businesses such as British Telecom, British Airways, British Steel and British Gas?

If you think the U.S. education is brainwashing the young with liberal ideology it appears that it is nothing compared to what is happening in the UK.

Of course, the Democrat candidates will still be out there campaigning.

Who knows what inane thing we will hear from Biden, Sanders, Warren or Buttigieg and other Democrats this week?

If anybody gets in at this point, they better have access to a lot of money.

Take a look at this interesting chart that shows how much each candidate for President has spent on tv advertising so far in the campaign.

Here is how the Democrats spending breaks down according to Nate Silver.

All other Democrats combined   $15 million

That is some news. Where else have you seen that?

Are we at the point that unless you are a billionaire you can't run for President?

Too early to tell.

Average of three polls released last week has Steyer at 1.3% and Bloomberg at 4.7%.

All the best to you this week whatever the news.
Posted by BeeLine at 6:58 PM