I think most people understand that the United States is in the midst of changing demographic trends.

The nation is getting older. There are more immigrants. Minority populations are growing. The White population is aging and getting smaller as a percentage of the whole.

However, I doubt many fully understand how profound these changes really are and where it leads.

After all, demography is destiny.

I follow this subject closely and have written about it from time to time in BeeLine.

For example, I wrote about data on 2018 births in June where I pointed out that just 51.5% of births" in the United States last year were White.

Despite all of that, I was still surprised when I came across this factoid the other day.

Over half of all the minority and immigrant populations in the United States today are parts of the Millennial (Generation Y) or younger generation  (Generation Z).

That means that over half of the entire population of minorities or immigrants in the United States are under the age of 38!

Seeing that statement I had to research it myself which led me to StatisticalAtlas.com which puts together data on demographics as well as the ethno-racial composition of the USA population by age.

The information included in these charts is based on population estimates for 2010-2012 so keep that in mind. 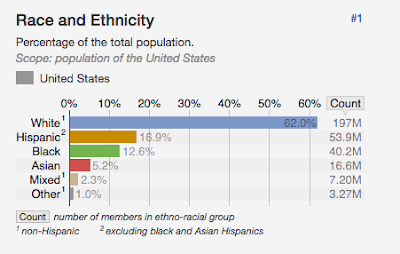 The relative Ethno-Racial Composition by Age looks like this. 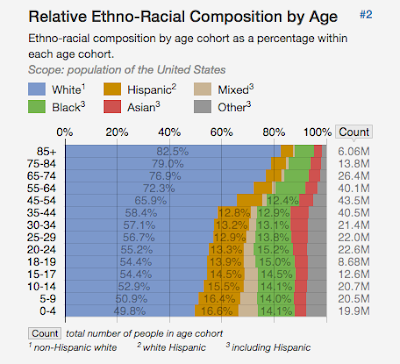 Notice that Whites are already in the minority at ages 4 and under. At age 9 and under we essentially have an equal proportion of Whites and Minority/Immigrants in the United States.

This clearly shows the effect of the lower White birth rate that I wrote about before, but also the impact that immigrant children are having on the demographics of the country.

This data shows that 57% of the minority and immigrant population in the United States is actually age 34 or younger.

On the other hand, Whites age 34 and under make up only 40% of the overall White population.

The Pew Research Center adds some more context to this subject.

The most common age of white Americans is age 58.

The most common age of Asians in the USA is 29.

The most common age of Blacks is 27.

The most common age of Hispanics is age 11. 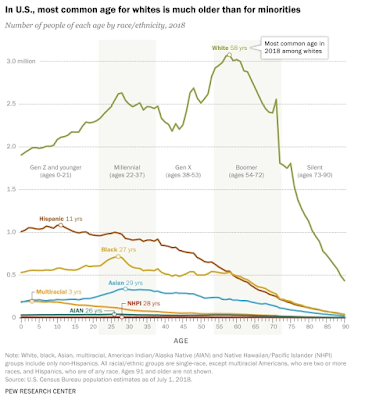 Current birth rate trends will undoubtedly skew these numbers even further in the future as will continued immigration which primarily involves those of younger ages..

You begin to get an idea of how these trends will reshape the demographics when you consider a few numbers and what happened over time.

400,000 Africans were imported to America as slaves in the 17th and 18th centuries. The importation of slaves was outlawed in the United States in 1807.

Immigration statistics since that time indicate that an additional 560,000 Africans immigrated to the United States between 1820 and 1996 (the most recent data I could find).

However, those 1,000,000 African immigrants has resulted in 40 million African Americans today.

Interestingly, based on numbers I have seen, about 40 million Europeans have immigrated to the United States since the 16th century. Most of these were Caucasians which now form the base of the 197 million Whites in the country.

Between 1820 and 1940 there were only 1.2 million Hispanics from Mexico, Central and South America and the West Indies who immigrated to the United States. Things have changed a great deal since that time.

In 1970, there were 9 million Hispanics in the United States.


Today it is estimated there are over 60 million Hispanics in the USA and projections suggest that this population will be nearly double that number in another 40 years. The number of Hispanics under the age of 20 today and the continuing influx of immigrants (legal and illegal) across the southern border of the United States might actually make this forecast low.

If demography is destiny, what destination are we headed to based on this data?

Within 25 years Whites will be in the minority in the United States. 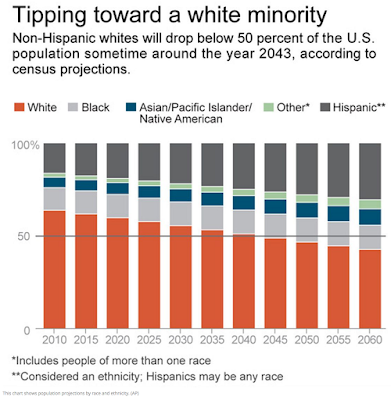