Now that the impeachment inquiry hearings have concluded where does it go from here?

Most assuredly it seems that the House Democrats will bring Articles of Impeachment for President Trump to the full House for a vote before Christmas.

I can't imagine that it can end in any other way in the House. It would be very difficult for the Democrats to turn away now and not lose face.

It is also hard to imagine that the impeachment vote will not be very close to a strict party line vote. There might be a few Democrat defectors. 218 votes are needed for impeachment. The Democrats currently have 233 in their majority (there are currently four vacancies) meaning that they cannot have more than 15 defectors if all Republicans stand with Trump.

I also continue to be amazed that Democrats and Republicans can look at the evidence in this case and come to such diametrically opposed conclusions about it. I think this shows just how partisan this whole process has been. I think it also points to the fact that this is much more about politics than it is about high crimes and misdemeanors. It also speaks to the significant partisan divide we see in the country as a whole.

If you wonder how large the partisan divide is in the country right now, compared to what it has been in the past, look at this chart by the Pew Research Center that graphically shows the gap. 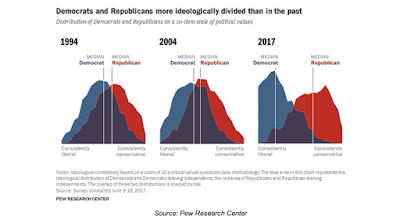 Notice that the Democrats are much more liberal than Republicans are conservative and the median Democrat is much further to the left than the median Republican is to the right.

Consider as well that this chart is from 2017. The divide has only gotten wider as the Democrats have gone further to the left over the last two years. If you doubt it, consider the positions of most of the Democrats running for President.

Why have the Democrats persisted in the impeachment effort when it is clear that no national consensus exists that Trump should be removed?

A big reason seems to be that a large constituency of the Democrat party for three years has been promised by high profile Democrats and the media that Trump will be removed. It hasn't happened despite everything that has been thrown at him. Notice that the impeachment talk actually increased after the much anticipated Mueller Report turned up nothing.

However, Trump's approval ratings, poll numbers and the percentages of Independents opposed to impeachment all have turned up for the President since the impeachment hearings began.

The attacks on Trump seem to have hardened Trump's support with Republicans and Independents seem to be concluding that this is nothing more than a partisan political game for Democrat politicians and the media.

The Democrats must have also decided that they would pursue impeachment because they also could not take the risk that Trump might actually be reelected. Speaking of that, this recent poll by Emerson has to terrify the Democrats.

By pursuing impeachment Democrats must figure that they can further taint Trump's reputation even if he survives. Trump has to run for reelection as an "impeached" President even if he is not convicted in the Senate.

However, all of this carries significant risks to Democrats.

First, as mentioned above, Independents are seeing this as political theatre as issues that are important to them are swept aside by the Democrats in Congress. Are Democrats really interested in them? What does this portend at the ballot box in 2020?

Second, there are 31 House districts currently held by Democrats that Trump won in 2016. Will these House Democrats defy Democrat leadership and vote to impeach Trump? History suggests that not many will dare cross the line on their leadership. If they vote to impeach and Trump is acquitted in the Senate trial, how many will lose their seat because of that one vote? The Democrats may be putting their House majority at risk by pursuing impeachment.

Third, the Democrats may think that they need to move forward on impeachment or incur the wrath of their base. However, an old adage states, " If you are going to take a shot at the King, you better not miss." What will the base be saying about House leadership if they go through all of this for nothing? Will the failure to remove Trump demoralize those base voters? Will it motivate Trump voters to turn out in the Fall?

Finally, a House vote to impeach Trump by Christmas means that an impeachment trial will begin in the Senate when the new year begins. All Senators will be required to hear the evidence in that trial and ultimately vote on the impeachment of Trump. That includes Bernie Sanders, Elizabeth Warren, Kamala Harris, Cory Booker, Amy Klobuchar and Michael Bennet. How can these candidates campaign when they are supposed to be sitting as the jurors on a trial to remove the President of the United States? How can they even make any comments about Trump during the trial since they are supposed to be even-handed arbiters? Moreover, how do the Democrats expect there to be any media attention regarding their Presidential candidates when everything is focused on the impeachment trial in Washington?

Bill Clinton was impeached in the House of Representatives on December 18, 1998. (Look for similar timing this year as you can't expect any Congressman to defer their holiday vacation because of a little old impeachment vote). The Senate trial began January 7, 1999 and Clinton's acquittal verdict was voted on February 12, 1999. Similar timing with the impeachment of Trump will mean there will be a substantial conflict with the Democrat Presidential primaries. How does this make any sense if your party is trying to win the White House ten months away?

This may be why the White House and Senate Republicans have already stated that, if articles of impeachment are passed in the House, that they would want a full trial rather than a swift motion and vote to dismiss the charges. This would also allow the White House to call numerous witnesses that might include Hunter Biden, Joe Biden and the whistleblower who initiated all of this.

We may find that Nancy Pelosi considers all of this, and while also counting the votes in her own caucus, decides that it makes more sense to censure Trump rather than impeach him. This may become a more attractive option the Democrats, especially if it continues to look like there are nothing close to 67 votes in the Senate to convict Trump.

That is what a sensible person would do at this stage. However, are there any Democrats with any sense still remaining?

I understand that they don't like Trump. They did not like him three years ago and they dislike him even more today. Let's not forget this headline from The Washington Post on Trump's inauguration day. 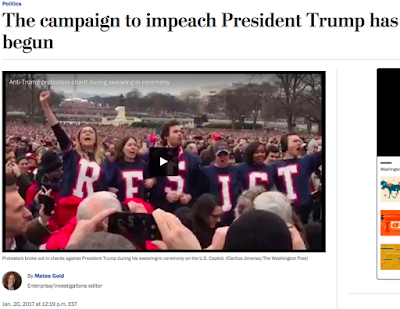 However, it is three years later and there is an election in less than one year that can remove him from office. Why put the country through all of this? To what end is this justified?

To use a football analogy, the Democrats are in a tie game and they are at their own 35 yard line with five seconds on the clock. They can take a knee a play and play to win in overtime. Or they can take a chance on a Hail Mary pass even though their quarterback doesn't have the arm to throw it into the end zone.

The Democrats are going for the Hail Mary but they risk fumbling the handoff or throwing an interception that results in the other team returning it for a touchdown.


A Hail Mary is the Democrats' best move right now?

A most curious strategy for a party that booed God at their National Convention.

We live in very interesting times.