We live in a headline dominated world supported by 10 second sound bites and 280 character tweets.  Most people never get beyond the superficial to see the substance of anything. In fact, a majority are probably not even getting to the surface of most issues, let alone any depth.

Facts have been replaced with narratives that politicians use to support the worldview that they want you to believe. Those narratives ignore facts and instead rely on a story that is told over and over again so as to make everyone believe it is the TRUTH.

Of course, mainstream media and Hollywood are often complicit in promoting the narratives of the liberal left because those narratives are consistent with their own worldview.

The goal is for you to believe the narrative and not consider the actual FACTS.

There is no better example of a narrative than that involving global warming and climate change. We hear it all the time. Our climate is changing like it never has been before. It is getting warmer. Arctic ice is melting. The oceans will rise. Large cities will be under water. Millions will die if we don't do something. Every catastrophe that happens around the world is used to prove the narrative. Fires in Australia. Drought in Africa. Warm temperatures in January in New York.

I have challenged the climate change narrative innumerable times in these pages with actual facts. Despite what you hear in the narrative, the science behind the theory of man-made climate change is far from settled.

I follow Tony Heller of RealClimateSceince.com who is a trained engineer and scientist who posts valuable perspectives on historical trends on weather and climate. Heller posts fact-based data and history on what has actually occurred with the weather rather than a narrative based on speculation.

For example, here is Tony's recent chart to put this year's "warm January" fact in context. Yes, January in the United States was warmer than average this year but the overall average trend in January temperatures has been down over the last 105 years.

This downward trend has occurred despite a continuing increase in man-made carbon emissions over those 105 years. Something does not add up with the narrative.


The ice cap is falling off a cliff. It could be completely gone in summer in as little as 7 years from now.
-Al Gore, Nobel Peace Prize Speech, December, 2007


This is what the arctic ice cap looked like a year after the date when Gore was warning that it could be gone. I included this image in a blog post in which I wrote about a number of inconvenient truths involving Gore back in 2016. 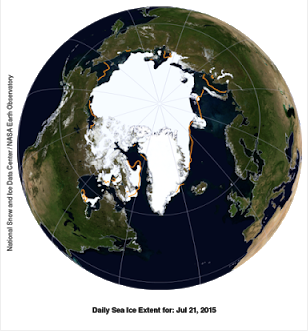 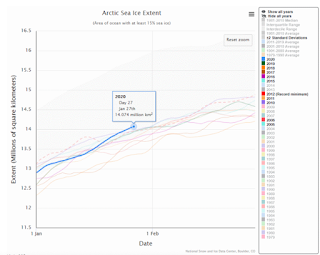 This is why you hear a narrative rather actual facts when it comes to climate change.

You also see the narrative in place with the attacks on the 2nd Amendment. We hear that ownership of guns needs to be restricted and the narrative reaches a fever pitch whenever a mentally ill person uses a rifle to kill people in a mass shooting.

You may hear that nearly 40,000 people die from firearms annually. It is unlikely that you hear that about 2/3 of that number are suicides. You never hear that there are generally less than 400 people murdered by rifles in any given year in the United States. That is killings by all rifles, not just so-called assault weapons. That number also includes all those mass shootings that get so much attention in the narrative.

By comparison, in 2018 (the most recent data available), 672 people were killed by the use of "fists, feet and 'other personal weapons'." Is this ever included in the narrative?

Nevertheless, due to "the narrative", Walmart, Dick's Sporting Goods and other retailers have ceased selling rifles.

Abortion is another issue in which the narrative is utilized. The narrative says that there is no issue more important issue for women. We are told that government funding of Planned Parenthood is critical for vital women's health issues. We are now even being told that abortion should be legal up to (and possibly even beyond) the birth of the child.

The other fact that is not widely none, or ever mentioned in the narrative, is that the pro-life movement has been very effective itself in challenging abortion with its own narrative.

I was surprised when I saw this recent graph that tracks the number of abortions per woman in the United States.

Beginning in 2014, the abortion rate has actually dropped below the level it was when Roe v. Wade was decided in 1973. In fact, abortion has been on a downward trend since 1980 when the election of Ronald Reagan helped to elevate the pro-life movement in the national consciousness. There are fewer abortions today per 1,000 women when abortion has been "legalized" at the federal level than when it was an individual state issue. 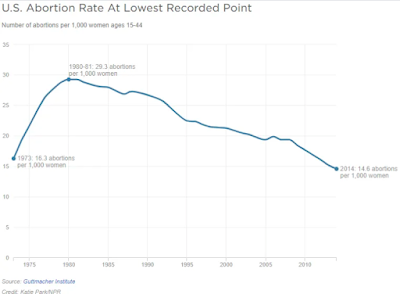 When have you ever heard that?

Of course, the biggest narrative that has been playing out every day over the last three years involves Donald Trump.

How many times have you heard this narrative?

Donald Trump is a corrupt, unhinged, racist man who colluded with Russia to steal the 2016 election in order to enrich himself.

That narrative led to the appointment of a Special Counsel who was appointed to investigate Trump. Despite spending $30 million and having a team of 19 attorneys (most of who had histories of donating to Democrat candidates) they found absolutely no evidence of any collusion with Russia by Trump or anyone else on his campaign and no evidence to support a charge of any obstruction of justice.

This led to another narrative. Donald Trump is a corrupt, racist man who abused his power as President by attempting to influence the 2020 election by having Ukraine investigate a political opponent by withholding foreign aid and obstructing Congress when it tried to investigate him.

We have now just gone through another four months of an impeachment inquiry, a partisan impeachment in the House with not one Republican vote supporting the articles and an acquittal by a majority of the U.S. Senate on both counts in the impeachment articles.

We are already starting to see the beginning of another narrative. The Senate's acquittal of Trump is now being referred to by Democrats as illegitimate because it was not a fair trial because no witnesses testified before the Senate. However, this ignores the fact that 17 witnesses testified or were deposed before the House Impeachment panel whose testimony (along with 28,000 pages of documentary evidence) was considered and included in the Senate trial record.

The Democrats also fail to mention the fact that the witnesses that President's defense team wanted to call during the House impeachment inquiry were not allowed to testify. Is that what is called a fair trial to begin with?

Make no mistake, Trump uses his own narratives.

"It was a perfect phone call."

"We are building a big, beautiful wall."

Of course, Trump does not have the mainstream media megaphone on his side to amplify his narratives so he  has to use Twitter.

I know many Trump supporters wish he would use Twitter less. However, Trump would have difficulty getting his narratives out there but for his use of Twitter. I have come to accept that is the reality of taking on the Washington and media establishment.

Beware the narrative from whichever source it comes from.

Strive to understand the underlying facts and reality and the context that surrounds the issues.

The best way I know to do that is with a steady diet of BeeLine---the shortest route to what you need to know.

Do your friends a favor and also share it with them. There is a long season of narratives ahead of us.