There continues to be a lot of talk about poverty and income inequality in the United States. It is a popular topic among Democrats running for President despite the strong economy. There is no disputing the fact that the rich have a higher share of the country's income and wealth than they did 40 years ago. For example, the share of income of the top 1% went from 8.3% of total income in 1981 to 21% in 2019.

In my view, the largest drivers in this trend have been the impacts of technology, international competition and illegal immigration. Technology has put a premium on education and those with the rights skills and education have been able to drive their incomes upwards. Technological advances and increased economic freedom have also affected income equality. People like Bill Gates and Steve Jobs created fantastic new products that increased both productivity and our quality of life. However, the information age spreads money around much differently than the manufacturing age we were in 40 years ago.

Manufacturing spreads income in a much broader swath in an economy. For example, you used to need to pay a lot of workers to make a ton of steel or build an automobile. You only need a couple of computer programmers today to develop a video game that might sell millions. For example, the Call of Duty: Modern Warfare 3 game that was released in 2011 grossed $1 billion in the first 16 days it was for sale.  Instagram's entire company had only 13 employees when it was sold to Facebook for $1 billion.

International competition has also put enormous downward pressure on the incomes of those with fewer skills and lower education levels as this labor pool is now competing with China, India, Mexico and other emerging economies.

Therefore, in relative terms, the demand for unskilled labor has fallen while the demand for skilled and educated workers has increased. These both have contributed to income inequality. The overall trend has been exacerbated by millions of poorly educated illegal immigrants who have entered the country the last 40 years and have further depressed wages in the lowest income categories.

This chart, that was developed by the American Enterprise Institute, puts the income inequality issue into a little better context.  Looking at this chart you can see the tremendous impact that demographic factors have on income.  I might add that most demographic factors are individual choices. You have no control over when you were born, or who you were born to, but choices are made about graduating from high school, going to college, marriage, children born out of wedlock and the like.  These choices are also not fixed over a lifetime and certainly are not fixed from generation to generation. 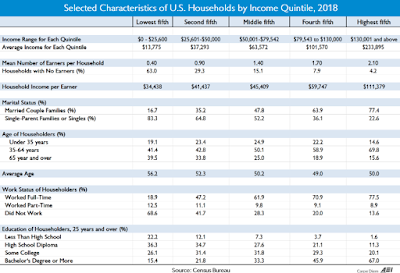 The first thing you notice in looking at the chart is those that are in the highest fifth of U.S households have earned that status by working.  In fact, 2.10 is the mean numbers of earners in the top quintile of households. There are a lot of two earner families in that top quintile. There might also be a recent college graduate living in the basement. The lowest quintile only has .40 earners per household.

It is no surprise that education stands out as a key demographic factor.  Only 1.6% of the highest earners failed to graduate from high school but 22.2% of the poor failed to get that basic educational attainment. This is despite the fact that a free high school education is available to everyone in the country.  On the other hand, 67.0% of the richest Americans have graduated from college.

As you can see, in most of the selected characteristics there is a direct demographic correlation that corresponds with moving up the income scale whether it is number of earners per household, marital status, work status or education.

In order to address the issue of income inequality in this country we need to spend more time on trying to pull people up from the bottom than by trying to penalize and push people down from the top.  After all, if you look at the data, it appears that most people at the top got there by simply doing a few things right. Getting a good education, working hard, getting married, avoiding out of wedlock births.

The liberal-leaning Brookings Institution has studied this issue extensively and it states that if you want to avoid poverty and join the middle class in the United States, all you need to do is follow three simple rules...