How Many Really Know Bernie?

Bernie Sanders seems to have all of the momentum heading into the Democrat primary in South Carolina this Saturday and Super Tuesday following close behind a few days later on March 3.

South Carolina is not considered a good state for Sanders with its high percentage of African American voters which have not favored Bernie in the past. Two-thirds of Democrat primary voters in South Carolina are expected to be African American. Hillary Clinton beat Sanders by 47 points in South Carolina in 2016. An unexpectedly strong showing there, followed by a large delegate haul on Super Tuesday, could put Bernie in a commanding position for the Democrat nomination .

That prospect seems to be causing great alarm among the Democrat establishment who are seeing their party effectively taken over by an avowed Socialist.

What I find interesting is that while Bernie seems to always a high level of energy and enthusiasm among his faithful supporters, the question remains just how great that support is within the general electorate.

For example, Sanders is drawing 29% support in the latest Real Clear Politics poll average of Democrat voters nationally. He has gotten about 28% of the vote in the first three primary states to lead the field. However, he is a long way from getting majority support in the Democrat party right now let alone being able to also attract Independents in a general election with his socialist views.

I have to wonder as well how many voters really know Bernie?

I mean, really know him and understand what he wants to do to the United States of America.

I believe there is good reason for traditional Democrats to be concerned about what Bernie could do to their party.

For those that don't know Bernie, let me give you a little background.

First of all, even though Sanders is running for the Democrat nomination for President, he does not consider himself a Democrat. He has never run for any office he was elected to (Mayor, Congressman, Senator) as a Democrat. He refers to himself as a Democrat Socialist.

Sanders earns his reputation as a Socialist honestly. Until he was age 40 he never had a steady job or paycheck. Of course, when he got a steady job it was a government job---Mayor of Burlington, Vermont.

Investor's Business Daily provided some useful background on "Bernie Sanders, The Bum Who Wants Your Money" in an editorial in 2016.

Sanders spent most of his life as an angry radical and agitator who never accomplished much of anything.

One of his first jobs was registering people for food stamps, and it was all downhill from there.

Sanders took his first bride to live in a maple sugar shack with a dirt floor, and she soon left him. Penniless, he went on unemployment. Then he had a child out of wedlock. Desperate, he tried carpentry but could barely sink a nail. “He was a shi**y carpenter,” a friend told Politico Magazine. “His carpentry was not going to support him, and didn’t.”


Further, you begin to understand that very few people really know Bernie when looking at the results of a recent NBC News/Wall Street Journal poll which showed Sanders with a double-digit lead among all candidates for the Democrat nomination and a 4-point lead in a general election matchup with Trump.

However, in the same poll voters were asked about seven different characteristics for presidential candidates and whether they would have reservations or feel uncomfortable about a candidate with that characteristic.

What were the three things that voters would be most concerned about in a candidate for President?


Of course, all of these describe Bernie Sanders. He is an avowed socialist who had a heart attack last fall and will be 79 years old if he is elected President.

Do you see a disconnect somewhere?

How could this be?

Most likely it is that many, many voters do not know much about Bernie other than he has been portrayed as "cool" and "hip". They may have also heard he is going to fix health care or student loans and make the rich pay more in taxes.

However, many clearly do not really know who Bernie is. Most voters just do not start paying close attention until a month or so before the general election.

How crazy is "Crazy Bernie"?

Let's start with the fact that Bernie says he wants to file criminal charges against executives of fossil fuel companies. In other words, he wants to put the people in jail who provide the fuel to warm your home, charge your cell phone and power your car.

He wants to totally eliminate private and employer-sponsored health insurance and replace it with a single government program which he calls Medicare for All. He claims it would require no premiums, no deductibles and no copayments. Of course, current Medicare has all three and private insurance is still necessary to supplement Medicare because of the gaps in coverage. Medicare as it is today is headed for insolvency. Would Medicare for seniors also be "free"? How could it not be if everybody else is getting "free" coverage? Where is the money going to come for all of this?

He wants to implement a Green New Deal that would cost trillions and trillions of dollars.

He says he will eliminate all student loan debt and make college free. He says that he will pay for this with a "small tax" on Wall Street. However, did you know that there is more student loan debt today than the entire GDP of Russia?

He says he is going to abolish ICE and our Customs and Border Patrol. What do you think happens if you have free health care and college for illegals and you also have an open border?

He wants to raise income taxes on anyone making more than $29,000 per year. I can guarantee this will not be the only taxes that will be raised or enacted on the working men and women of the country if Bernie has his way.

Not only does he want to raise the income tax of the wealthy he wants to effectively confiscate their wealth. He says he wants to establish a new wealth tax that would slowly eliminate the wealth of entrepreneurs like Jeff Bezos and Bill Gates to the tune of 8% per year. After ten years, the government would take most of what they accumulated over their lifetimes.

These proposals are not just crazy, they are literally insane. 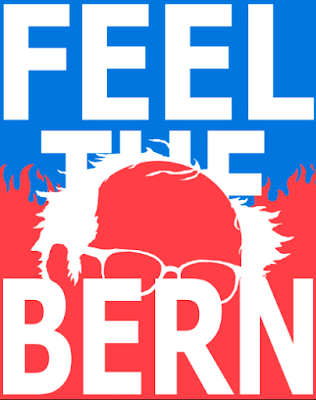 The reality is that Bernie wants to burn the United States of America to the ground with his proposals.

How many really know Bernie?

Feel free to send this blog post to those who really need to know Bernie.

It will assuredly be the only truly free thing they will ever get when it comes to Bernie Sanders.
Posted by BeeLine at 10:49 PM