Alexandria Ocasio-Cortez is at it again.

Of course, she is missing the point. When it is said that someone has "pulled themselves up by their own bootstraps" it is an acknowledgement that they have overcome steep odds and impossible circumstances to succeed by their individual effort and willpower.

One would have to use that term to describe AOC's own rise in the political world. She was a 28-year old bartender who defeated a 10-term Democrat for her House seat who outspent her 10:1.

"Pulling yourself up by your bootstraps" is a myth and cruel joke? AOC did it herself. The fact is that achieving an impossible dream is easier to achieve in the United States than in any other nation on the face of the earth.

Why else do millions and millions of people from all over the world want to come here?

AOC also claims that 60% of the wealth in the United States is inherited.

AOC, like most Millennials, believe this falsehood. In fact, a recent study found that 72% of Millennials believe that most millionaires inherited their wealth. 52% of Baby Boomers do as well.

That study also found that inheritances actually are more meaningful to low income groups than they are higher income groups.


The research indicated that if all inheritance transfers were prohibited by the government, wealth inequality would actually increase! This is exactly the opposite of what AOC and Bernie Sanders would have you believe. This same study also found that about 23% of total wealth in the country was inherited---a long way from the 60% number that AOC quoted.

Why is AOC so wrong in thinking that most wealth is inherited?

The simple fact is that people who inherit money most often don't know how to turn it into more money. They are better at spending it than earning it. They also don't have the same appreciation for how hard it was to earn the money that their heirs did.

Consider the words of Cornelius Vanderbilt who was the richest man in the world when he died in 1877.

Any fool can make a fortune. It takes a man of brains to hold onto it after it is made.


Commodore Vanderbilt was prescient. When he died he left the bulk of his wealth to his son, William H. Vanderbilt ,who doubled his father's fortune through smart management of the family's railroad business over the next decade.

However, William died in late 1885 and it appears that brains were not inherited in equal supply to the wealth that was passed down to the next generations of Vanderbilts.

The Vanderbilt fortune was worth $200 million in 1885. That is equal to over $5 billion in today's dollars.


Within 20 years no Vanderbilt would be among the richest people in America, and

When 120 of the Commodore’s descendants gathered at Vanderbilt University in 1973 for the first family reunion, there was not a millionaire among them.

The story of the Vanderbilt family falling from fortune is told in the book Fortune's Children: The Fall of House Vanderbilt that I recently saw reference to in an excellent blog post by Nick Maggiulli. 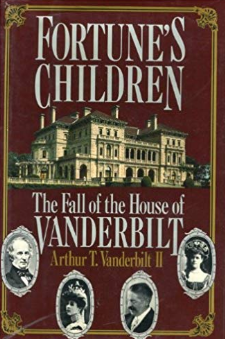 How did the Vanderbilts burn through that rich inheritance?

Maggiulli listed three obvious reasons there were no millionaires left in the Vanderbilt family after a couple of generations got their hands on the patriarch's wealth.


If you need one more fact to show how misguided AOC's view is on where wealth comes from in the United States consider the top 7 names on the Forbes 400 list of the wealthiest Americans.

Not one of these people inherited any substantial wealth. Moreover, I would suggest there are a few bootstrap stories among them.

In fact, Jeff Bezos' mother was a 17-year old high school student and his father was a bike shop owner when he was born. Bezos worked as a short order cook at McDonald's when he was in high school.

Gates dropped out of Harvard after two years. His father was a successful attorney in Seattle but Gates was a billionaire many times over before his mother passed away in 1994. His father is still alive.

Buffett's father ran a successful investment firm and was a Congressman but Warren Buffett was already wealthy in his own right before his father passed away in 1964.

Of course, most people know that Zuckerberg, Page and Brin all were billionaires before they reached the age of 30. Brin was an immigrant from Russia.

Ellison was born to an unwed Jewish mother in 1944. He was given up for adoption to his aunt and uncle when he was 9 months old. He attended the University of Illinois for two years but dropped out after his adoptive mother passed away. Larry Ellison did not inherit any wealth.

What should you take from this?

If you are to inherit anything it is better to have your parents pass down brain power, ambition, a strong work ethic and values rather than wealth.

What should you take from what Alexandria Ocasio-Cortez says about this subject or most anything  else she talks about?

If I can paraphrase a little from Cornelius Vanderbilt.

Any fool can be elected to Congress. It takes some brains after one is elected to prove you are not one.