I marvel every day at the information that is available to me that someone somewhere has been kind enough to put out there on the internet.

It seems only right that I share some of the more interesting stuff I see with you.

The average of CEO's hired in 2018 was 58 signaling an overall trend of companies hiring CEO's with more maturity and experience. 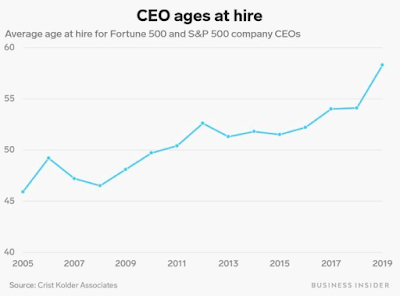 It does not appear that the Baby Boomers are willing to allow many Gen Xer's to become CEO's.

Countries with the most left-handers. 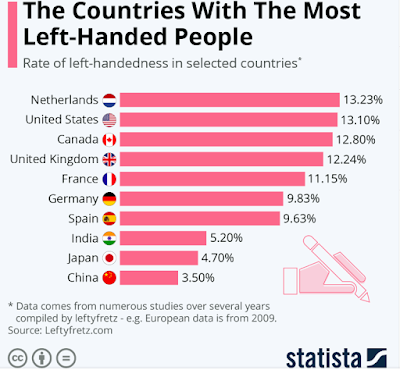 Do you think there might be a cultural bias against left-handed people in Asian countries?

Who was the greatest Japanese baseball player of all time? Ichiro Suzuki. Batted left. Threw right.

Did batting left-handed give him an advantage honing his batting skills growing up in Japan?

Shohei Ohtani of the LA Angels who is known for his dual skills pitching and hitting also throws right and hits left.

Do you see a pattern with top Japanese baseball players?

This factoid is from the book, "Fewer, Richer, Greener" by Laurence Siegel which makes the case as to why the world is a much, much better place than it has ever been and there is every reason to believe it will get better in the future if we continue to believe in free markets and free minds.

More 20 year old Americans today have a living grandmother than had a living mother in the year 1900.


That is pretty incredible, especially when you consider the average age of birth my mothers has risen over the last 100 years or so.

All bets are off if Bernie Sanders and similar Socialist thinkers are given the power to change our political and economic system. Why is it that they call themselves progressives? It seem the system we have been following is what has fueled progress like this.

A lot has been made of the fact that President Trump announced this week that he had commuted the sentence of former Governor Rod Blagojevich (D-IL) and pardoned former San Francisco 49er owner Ed DeBartolo, New York Police Commissioner Bernard Kerik and financier Michael Milken.

Many Democrats and those in the mainstream media said this shows that Trump has no respect for the rule of law. They say it is another example of his "abuse of power".

If Trump is abusing his power what do you call what Obama and Clinton were doing?

By the way, if you are keeping score, the Democrats above averaged 181.2 pardons and commutations per year. The Republicans 30.8 per year.

Trump is the lowest by far compared to any Democrat or Republican.

Proving once again, context is everything when assessing anything.

Isn't it interesting that in a country where the number of people who say they are concerned about the environment and fossil fuels has increased continually over the last 30 years but are the same people who increasingly drink water out of plastic bottles in which it takes 17 million barrels of oil per year to make those bottles for the American consumer. 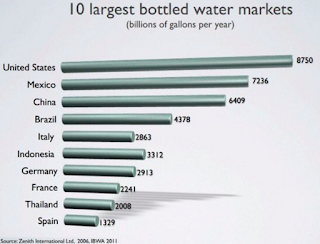