We have 100 days to go until the national election in the United States.

Compared to other years, I have written almost nothing about the upcoming election.

There are a couple of reasons for that.

First, Covid-19 and BLM have given me plenty of material to write about.

Second, I think it is almost impossible to predict what is going to happen in November considering what is going on in the country right now.

The pace of events is overwhelming. In fact, it would not surprise me if we have yet to see what historians will later point to as the most consequential issue in this election.

Here are some examples that are not too far-fetched.

Joe Biden or Donald Trump comes down with Covid-19 or another health issue.

Covid-19 is effectively wiped out by October 1.

A new scandal is alleged implicating Donald Trump and/or members of his family.

Joe Biden steps down from the ticket after several disastrous public appearances raise questions about his cognitive abilities.

The Justice Department indicts several high-ranking Obama appointees and FBI agents making it clear that there was a coordinated government-led attempted coup intended to undermine a Presidential campaign and/or the results of that election.

It becomes increasingly clear that China covered up the release of Covid-19 from its Wuhan lab and its operatives are actively supporting the protests in major U.S. cities to sow division.

I gave up making predictions about elections after the 2012 Obama-Romney race. I prefer now to just provide some observations on the politics involved.

2020 has been a year of surprises and the fact that Joe Biden is the Democrat nominee is something I would not have expected a year ago.

Joe Biden is what I call a "default" nominee in the same manner that Bob Dole was the GOP standard bearer in 1996 and John McCain was in 2012.

A crowded Democrat field left voters confused and concerned. There appeared a real chance that a committed Socialist could win the nomination and the other candidates in the field were apparently considered by the voters to be too far left or judged to be too moderate.

When human beings are uncertain about a decision they tend to default to the familiar.  Familiar is the safe choice. You see it in politics all the time. Voting for an unknown and unproven candidate is risky unless the new candidate really convinces voters and separates themselves from the field.

Biden benefited from that uncertainty and won by default. However, he really lacks a defining message in his campaign. Even worse, it is unclear whether he is capable of delivering any message coherently.

Democrats seem to be making a bet that all that is needed from their default candidate is that he is not Donald Trump. Perhaps they are right. However, history would suggest that voters want more if they are being asked to make a change. Where is the "hope" with Joe Biden?

That is another truth regarding human beings. Making any change involves risk.  People tend to prefer the known versus the unknown. That is why incumbents usually have an advantage in most elections.

Early in the campaign I wrote a blog post about Biden titled "The Human Gaffe Machine". I suggest you read it if you are not familiar with Biden's lengthy gaffe-ridden history. You were never sure what would come out of Joe's mouth when he was at the top of his game. If I was a Democrat I would be terrified at what could transpire over the next 100 days.

Can the Human Gaffe Machine win the Democrat nomination? I will be shocked if Biden prevails through the primary process. If he does win, it will truly show just how far most Democrat candidates have strayed compared to where most Democrat voters are. Biden might be what they believe is the only reasonable choice. That will say a lot in itself.


Before Covid-19 occurred I believed that there was a better than 50% chance that large Democrat  donors and the establishment would make a move to replace Biden at the top of the ticket. They have to know the risk they are taking with Biden. Of course, Joe would have would have fought the attempt to supplant him but in the end the big money wins. It would have been packaged as Joe had decided that his health required him to step aside.

However, Covid-19 has given Biden a lot of cover. It has also helped him with the polls. A number of polls show Biden up by double digits. The Real Clear Politics composite average shows him up by 9.1%.

These poll results have clearly given Biden a reprieve. It is doubtful that Democrat donors would want to rock the boat looking at these numbers right now.

Nevertheless, I think the Democrats have placed as extraordinarily risky bet on Biden. I don't think Trump could have been given a better candidate to run against.

I am not giving any poll a lot of credibility in a year like this one 100 days before the election.

Check out the weightings in these recent polls in favor of Democrats as detailed by Joseph Sheppard. 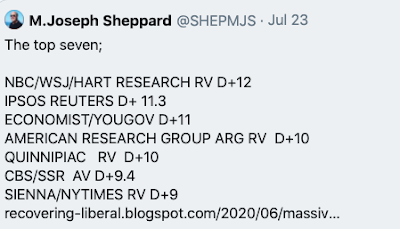 Considering that 90% of self-identified Democrats can usually be expected to support the Democrat nominee, if you over sample Democrats by 7 points that would shift the overall poll by 6 points in favor of Biden.  Using the same turnout breakdown as 2016 means that Biden would only be up 3 points rather than 9 points.

Interestingly, Rasmussen's most recent poll has Biden up by only 2 points rather than 9 or 10. Rasmussen was one of the most accurate pollsters in 2016.

The internals of the most recent Rasmussen daily tracking approval rating raise even more questions as to what is really going on and how much we can rely on any polls right now.

However, what really stood out to me were the internals in that poll.

Rasmussen raises the question of whether a backlash is building regarding all of the lawlessness we see going on in American cities.

It actually shows Trump with 49% approval with Blacks and 50% with women! Those numbers are astounding if true. In fact, I have a hard time believing they are true just as much as questioning the validity of a +10% Democrat sample in the polls above. 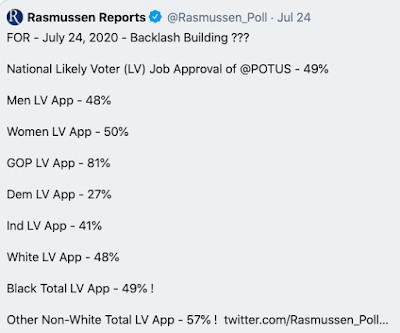 Approval ratings do not necessarily convert to votes but let's consider these numbers in more detail.

Look at the numbers above. Trump's White approval has not changed since Floyd was killed and the protests and riots began in American cities. On the other hand, Trump's approval with Blacks is up 27 points and with Non-Whites 16 points.

Perhaps there is a reason we see so few Blacks participating in the BLM protests. Minorities might be those most concerned about defunding the police, emptying prisons and promoting a socialist agenda.

There is little question that Donald Trump faces severe headwinds in his re-election bid right now.

The mainstream media has a visceral hatred for the man the likes I have never seen.

There are a substantial number of people who are afflicted with Trump Derangement Syndrome who would do most anything to see that he is defeated in November.

The Covid-19 pandemic still plagues us.

The economy has been decimated by the virus and the lockdowns.
You are never 100% sure what Donald Trump will say or do.
However, it is also true that periods of crisis and uncertainty also play to the advantage of the incumbent. Difficult times call for a strong leader. Many people may not like Trump but when your back is against the wall there is something to be said for having someone you know is going to be tough and unrelenting. Say what you want about Trump but he is indefatigable. There is no quit in him. You also will never see him hiding in the basement.

I also still think Biden is a ticking time bomb for the Democrats. He has always been a human gaffe machine. That is now compounded by the fact that he appears well past his prime. I will be shocked if he does not do or say something that ultimately raises substantial questions about his ability to lead the country.

It is one thing to complain about Donald Trump.

It is another thing altogether for the American people bet their lives, livelihood and liberty on Joe Biden and the Democrats right now considering what we see going on in liberal-run cities across the country.

If you think electing Biden and the Democrats will calm the radicals down think again.

The fact is a Democrat victory in November would not satisfy the rioters, it would embolden them.

Look no further than what they have done to the Mayors of Seattle, Portland and Oakland.

This is what they did to the Mayor's home in Oakland last week. Oakland is one of the most liberal cities in the United States. The Mayor is a vocal BLM supporter. Just like the Mayor of Seattle, who had her home vandalized several weeks ago, they didn't seem to care that she had a "Black Lives Matter" sign in her window. 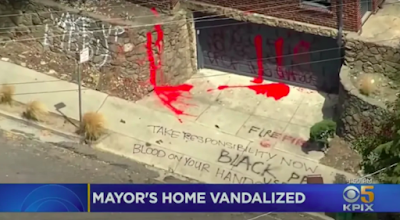 If you don't want to abolish the police, let everyone out of prison and go full Marxist, you are the enemy.

It promises to be a very interesting 100 days.