A blog post of random ruminations to help provide some additional context on what is going on in the world.

Are masks the answer to preventing the spread of Covid-19? We are now told that is the answer. I can guarantee when the cases start to wind down we will be told it was because of the masks. Will that really be true?

Or is there a natural up and down movement of the virus that generally plays out over a 2-3 month period when it attacks an area. Note how remarkably similar these curves are in various countries. 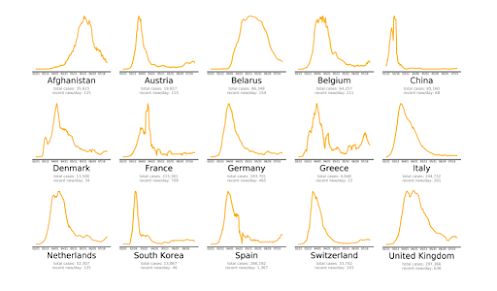 Do you see a similar pattern in the Northeast states?

If this pattern holds true it suggests that we are probably close to the peak in the current hot spot states of Arizona, Florida and Texas.

Look at the chart below that compares mask compliance and daily cases of Covid-19 in different countries around the world.

It is difficult to discern a consistent pattern.

For example, Vietnam and Finland have widely divergent use of masks and both are reporting no cases.

Very little mask use in Scandinavian countries and a lot in Asian countries. Denmark and Japan is another interesting comparison as is the Philippines and Australia.

Population density may be at play here as well. 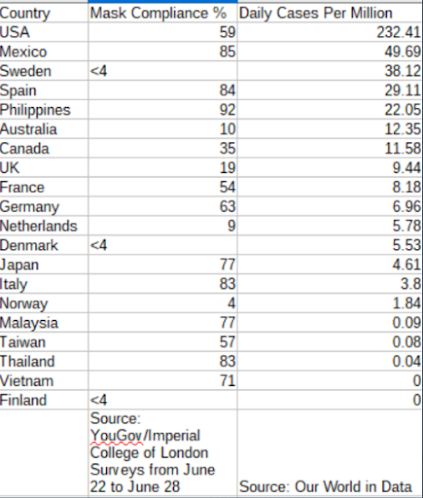 I can't help but wonder if face masks were the answer why weren't we told that they would allow us to avoid the lockdowns in March, April and May?

How have the Scandinavian countries brought daily cases down while specifically avoiding any mask protocols or mandates?

California instituted a mask mandate on June 18. It has been over a month since that order went into effect and daily cases have almost tripled. Considering that Covid-19 has an average incubation period of about 5 days it would seem that if masks were effective there would have been some slowing of the spread of the virus. There is no evidence of that.

Early on in the Covid-19 pandemic I saw some research that indicated that those who had been vaccinated against the flu this year seemed to be more vulnerable to Covid-19. I had not seen any more about that until I came across this interesting analysis.

It seems countries with high flu vaccinations rates for those over age 65 have experienced the highest death rates per million.

This got me thinking as well that nursing homes have some of the highest vaccination rates for the flu because of concerns for the elderly.

Is this coincidence or is something else going on here?

To put this in further perspective, the Rvalue representing the correlation coefficient for this data is .7299.

Statisticians would consider that a "high positive" correlation.


Balanced against this is the fact that most hospitals require all employees to get flu shots every year as a condition of employment. I have not heard that hospital workers have been disproportionately affected by Covid-19 despite being in a high risk environment. Why not? Lower age? PPE?

Most individuals focus on the returns of the stock market because that is what they hear about the most in the news.

However, the fact is that an investment in long-term corporate bonds over the last 20 years would have produced much higher investment returns than stocks over that time period.

This is all a function of the dramatic decline in interest rates over the last 20 years as lower interest rates caused the prices of bonds to increase. 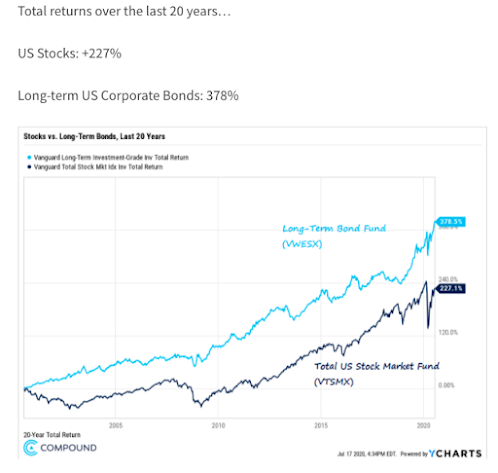 Unfortunately, there does not seem to be much more room for interest rates to fall further from where we are today.

When interest rates start to rise that light blue line will be inverted from what you see above.

I am sure that you have seen the following legal disclaimer that mutual funds and other investment products have to provide in their marketing materials.

Past performance is not an indicator of future results.

It was never truer than today with regard to bond returns.

However, those last 20 years have been unbeatable for bonds.

There has been no place that lower interest rates has had a bigger effect on American consumers than in mortgage payments.

Mortgage rates are at all-time lows. 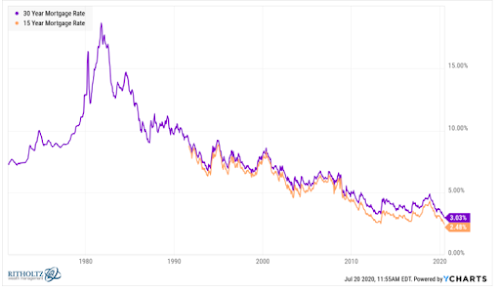 This chart by Ben Carlson puts this into further perspective.

Millennials may complain about their student loan debt but they probably should be putting everything in perspective. It will never get much better than this in borrowing to buy a home.

I wrote a blog post "What Is It With Millennial Women?" a few weeks ago asking the question as to why single, white Millennial women made up such large numbers in Black Lives Matter protests.

I still don't know the answer.

However, if you need further evidence that the BLM movement could not exist without these women consider these two photographs I came across recently.

How many young, white women are in this picture? 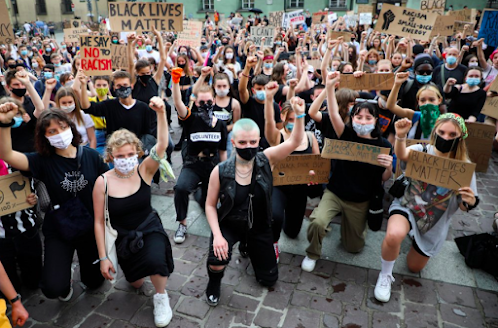 Also consider this image of a young woman who is "confronting" the police in Portland, Oregon.

I ask again. How do you explain it?

Is this really about Black Lives Matter or is it about something else?

Suzanne Venker is a relationship counselor and coach who is an op-ed contributor for The Washington Examiner.

She has some perspectives on the topic I had not previously considered.

Venker believes that these young women (and others) just want to belong.

People often think of peer pressure as something teenagers experience. In fact, peer pressure is just as prevalent among adults. It's the reason ideas spread like wildfire. People jump on board with what everyone else is doing or thinking for one simple reason: They want to belong.

Have you ever wondered how Adolf Hitler managed to convince so many people to commit evil acts? Or how cult leaders such as Charles Manson or David Koresh could get so many people to do what they told them to do and to believe what they told them to believe? The need to belong is just that fierce and strong, particularly for vulnerable folks who feel lonely or misunderstood.

It's happening right now with the Black Lives Matter movement. It's not about the fact that black lives matter, with which no sane person would disagree. A simple search of their own website will tell you its goals: to "disrupt the Western-prescribed nuclear family structure" and to "foster a queer‐affirming network."

But doing research or thinking critically about any idea or movement is threatening to what so many people want. These folks aren't interested in the truth. They don't want the facts. What they want is to belong.


Is there any group today that feels more lonely, is more misunderstood and wants to belong than young, single, college-educated white women? Many have no man in their life. There are no children or likely prospects that marriage or children will occur soon due to the imbalance between male and female college graduates. They live in rental apartments in large cities leading hectic, anonymous lives with little sense of community and huge sums of student loan debt.

I published the chart below three years ago that I found in The Washington Post that shows the imbalance between male and female college graduates ages 22-29 in various U.S. cities. Is it a coincidence that Portland and Minneapolis have been at the center of the BLM movement? 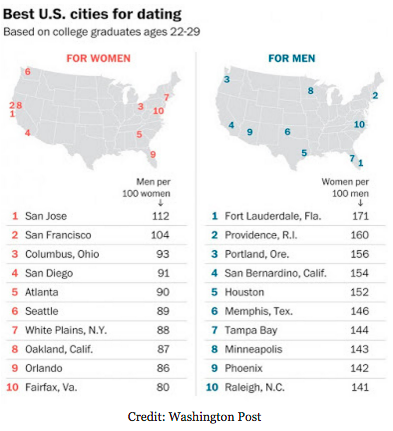 I have written about the imbalance of male and female college graduates several times over the years in these pages and warned of the potential impacts that it might have on relationships as well as society as a whole.

You can read two of these here and here.

Are we seeing some of those effects now?

Venker outlines the plight of these women in another op-ed.

In the last week alone, I've spoken with three millennial women (who reached out for coaching) who are all in the same boat: They're up to their eyeballs in debt, having gotten degree upon degree due to the pressure they felt from their parents and the culture to do something big with their lives. To not let their intellect go to waste. To not worry about finding a man to marry or even having children because, well, they have bigger fish to fry.

These women aren't just in debt — they're crestfallen. All they want is to have a family of their own, but they've been so conditioned to believe marriage and motherhood constitutes a lesser life that they don't dare admit this desire. I can't tell you the number of single women who tell me they'd give up their career in a hot second for a husband and kids.

That's the crux of the problem for the women who reach out to me: They were taught that their value lies in what they do, rather than in who they are — that if they don't live their lives the way men live theirs, they are failures. And it's tearing them up inside. One woman broke down after admitting she has spent a decade getting two degrees she doesn't even want.


I have no idea if Venker is right. However, it is additional food for thought because what we are seeing with single, white Millennial women is very difficult to explain.

Context is everything when assessing anything. When you see or hear anything these days think about the context around the issue. You cannot understand anything without putting everything in context.