Since I wrote my blog post "The Anti-Mask League"  a week ago there have been many more calls for everyone to wear a face mask in public.
As I wrote in that blog post it is difficult for anyone to know whether wearing a face mask is useful or not in that it has become so politicized. A big reason for this has been the contradictory advice that has given about masks from the beginning of the Covid-19 pandemic.

We don't need politics defining everything that affects our lives.
Mandating face masks would not be necessary if people were really convinced that their health, public safety and the economy would all benefit from their use.
I can only hope that the public health experts can do a better job of quantifying the science and, more importantly, being more effective in their messaging to the public.
The fact that this is not the case tells you all you need to know.

What I have found interesting over the last week was that more and more Republican governors were issuing mask mandates or strongly encouraging the use of masks.
Did the science change in one week's time or does this just show more politicians bending to media pressure and what seems to be a new form of "political correctness"?
Since my last blog post on the subject I have spent more time trying to better understand what we really know regarding the "science" of face masks.
We are being told today that wearing face masks is absolutely necessary if Covid-19 is to be contained.
If you don't think this is serious consider what Governor Brian Kemp (R-GA) said of its importance. If people in Georgia don't start wearing masks there may not be Southeastern Conference college football this fall. That is really serious!
The Atlanta Journal Constitution said it was "The Ultimate Ultimatum-Wear a Mask or No College Football".

Next to an executive mandate, Georgia Gov. Brian Kemp just pulled out the heaviest gun yet attempting to get the state to cover its face holes. When asked Wednesday about the prospects of playing that most indispensable game around here — that’s still college football until Korean baseball takes over — Kemp responded: “If people, especially our young people, don’t start wearing a mask when they’re going out in public and our numbers (of coronavirus cases) keep rising, that’s going to be a tall task.”

The Republican Governor of South Carolina, Henry McMaster, said the same thing, but also talked about high school football being at risk as well. 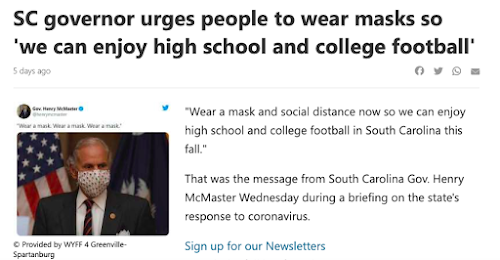 Due to the fact that the issue of face masks has become so politicized I have tended to put more credibility in older studies on masks. After all, it really was about the science at that time. Politics was not an issue.
Most of those studies were very skeptical about the effectiveness of masks to protect healthy individuals from virus transmission by wearing a mask.
For example, consider this randomized trial of cloth face masks and surgical masks at 14 hospitals in Vietnam in 2015.
Here is the conclusion of that study that found cloth masks were almost useless. In fact, the study found they may actually result in an increased risk of infection.

This study is the first RCT of cloth masks, and the results caution against the use of cloth masks. This is an important finding to inform occupational health and safety. Moisture retention, reuse of cloth masks and poor filtration may result in increased risk of infection. Further research is needed to inform the widespread use of cloth masks globally. However, as a precautionary measure, cloth masks should not be recommended for HCWs, particularly in high-risk situations, and guidelines need to be updated.

The study found that 97% of virus particles penetrated cloth masks compared to 44% with medical masks.
Neither percentage should give anyone a lot of confidence that masks are the panacea they are being portrayed as.
Another study I saw from Canada that dates to 2016 that was done by the dental society in that country found that face masks gave almost no protection to dental professionals from viruses. As you can imagine, there can be extensive generation of airborne material during the majority of dental procedures so this is an important issue for dental offices.
The study also addressed the question as to why face masks have been so universally accepted for so many years by medical professionals if they offered little protection. The answer given was that no one had really studied the issue in decades. It had just been accepted without question and it was not a high profile enough issue that involved big dollars that attracted much research. It was the medical equivalent of an urban myth.
If you don't think this issue is politicized, I went back to link that study for this blog post and found that it no longer was available on the site.
Notice that the study's conclusion is in the link--"face masks don't work revealing review"
https://www.oralhealthgroup.com/features/face-masks-dont-work-revealing-review/

The study seems to have been taken down because it does not fit the current narrative in Canada either.
I guess it was too revealing.
However, in February of this year the leading university in Canada was saying the same thing. 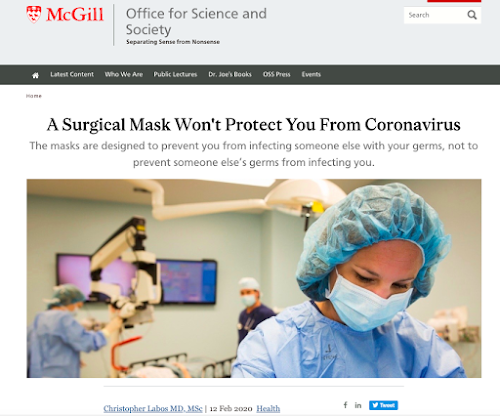 You can also find this paper from 2016 on face masks which came to the same conclusion.

The birth of the mask came from the realization that surgical wounds need protection from the droplets released in the breath of surgeons.3,4 The technology was applied outside the operating room in an effort to control the spread of infectious epidemics. In the 1919 influenza pandemic, masks were available and were dispensed to populations, but they had no impact on the epidemic curve.3 At the time, it was unknown that the influenza organism is nanoscopic and can theoretically penetrate the surgical mask barrier. As recently as 2010, the US National Academy of Sciences declared that, in the community setting, “face masks are not designed or certified to protect the wearer from exposure to respiratory hazards.”

Is it a coincidence that all of the "science" supporting the use of face masks has almost all come about in the last two months?
A Lancet study that was published in June appears to be the most cited scientific study supporting the use of face masks to prevent transmission of Covid-19. It looked at 29 studies involving mask use and Covid-19. However, these were all observational studies rather than randomised trials like the Vietnam study cited above.
Lancet claims the use of face masks might be supported by the studies done thus far but the report also states that there is "low certainty" in that conclusion. There is much more confidence that social distancing works to limit virus transmission. Certainty that social distancing is effective is "probable", especially at a distance of 2 meters as opposed to 1 meter.


The Lancet study suggests that the best method to stop the transmission of the virus is with good personal hygiene (washing hands frequently, not touching the face) followed by social distancing and then the use of masks. The combination of all of these provides the best defense.

Why do I think masks are getting so much attention right now?

It is not based on science. It seems to be me it is more psychological than anything else. I think that most people would rather think they are doing something (even if it is next to useless) than doing nothing. It gives people more comfort that they are in control of something they really have little control over.

The same is true as to why politicians and public health experts have changed their tune on the wearing of masks. Wearing a mask is a constant reminder to everyone there is risk. It also allows the politicians and public health experts to act like they are doing something... rather than nothing. Staying home, social distancing and washing your hands is boring. A mask puts everyone on notice all the time and is a much more visible action. It is an illusion rather than fact based on the research I have found.

Will masks make a difference in the end?

I can assure you that when it is over claims will be made that it made all the difference. The same was said in San Francisco after the first wave of the Spanish flu. However, those masks proved of little value in the second wave.

We will see an inevitable drop in cases and many will claim that it was masks that made the difference. Whether that will be true is another case altogether.

For example, are masks making a difference right now in the state of Washington?

Washington is a mandatory mask state and has been since June 23. 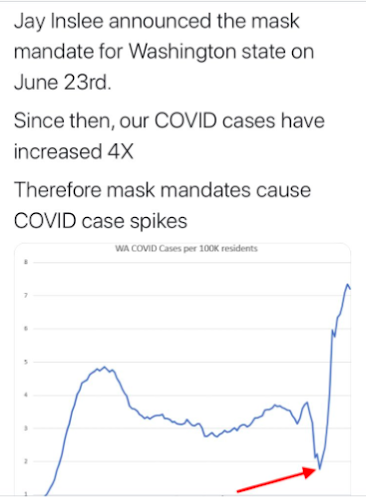 Is this coincidence or causation?

I think it is foolish to say that mask mandates cause Covid case spikes as this tweet does. However, could it be that masks are not as effective as the public is being led to believe?

Similarly, look at this poll that shows mask usage is at an all-time high in the United States. 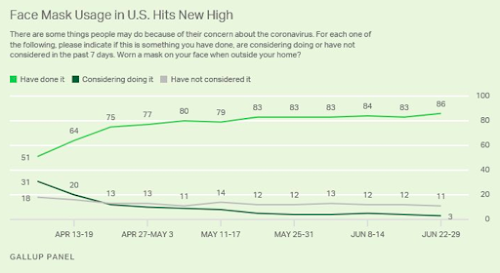 However, cases have also recently hit an all-time high as mask usage has increased and testing has ramped up. 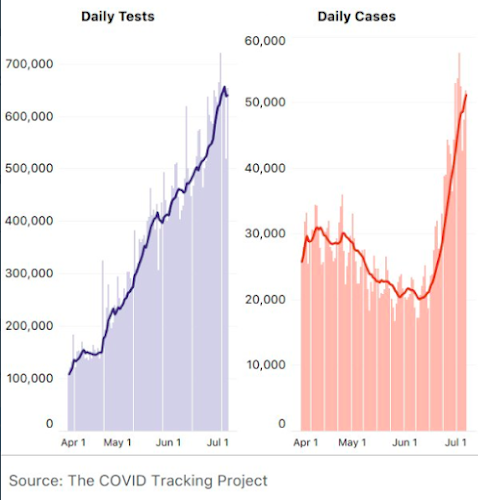 Then again , there are other things about Covid-19 that don't seem to fit into the media narrative right now. 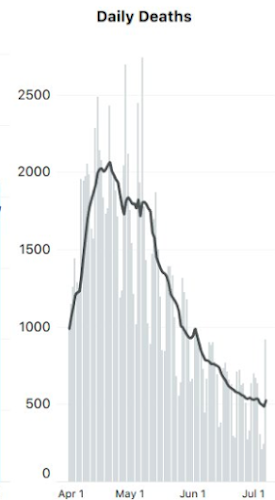 I am interested to see how long the mask mandates can be maintained.

Any mask mandates in the Spanish flu pandemic (as well as other measures such as school closures etc) were generally not in place for more than 4-6 weeks. A lot of public pushback surfaced after that time as evidenced by the Anti-Mask League in San Francisco.

We are going on for close to 4 months on social distancing. We have seen that breaking down in a big way recently. That is another reason that masks have become the "new thing."

How long can mask mandates be maintained?

I can't see that this can be sustained for much more than another month or two. People will reach their limit. Humans are not much different today than they were 100 years ago.

It is hard for me to see this surviving very far into the school year.

I believe that our faces are going to be unmasked sooner than we might think.

If I am wrong, how will you know? The red face of any embarrassment that I might show will be well hidden behind a mask.
Posted by BeeLine at 9:15 PM