No political party relies more on one particular group than the Democrat party does in the support it receives from Black voters.
It is safe to say that the Democrat party would have a difficult time surviving but for the African American vote.
This graph shows the percentage of the Black vote for President since 1936.
s

Donald Trump only got 8% of the Black vote in 2016.
However, that was still an improvement over the previous two Presidential elections with Barack Obama on the ballot.
The only reason that Joe Biden is the Democrat nominee is that he took 61% of the Black votes in the South Carolina primary. Blacks also casts 60% of all the Democrat votes that were cast in that primary.
On Super Tuesday Biden got 58% of the Black vote in the 14 Super Tuesday states. Biden only got 35% of the vote of White voters.
If you want to know why you will not see any Democrats speaking out against the radical agenda of the Black Lives Matter movement, look at the numbers above.
The numbers above also show why Joe Biden said this to a Black radio host last month.
“If you have a problem figuring out whether you're for me or Trump, then you ain't black."
If you want to wonder why Democrat mayors in cities like Washington, DC, Los Angeles and New York City are using taxpayer funds to paint Black Lives Matter on city streets, look at the numbers above. 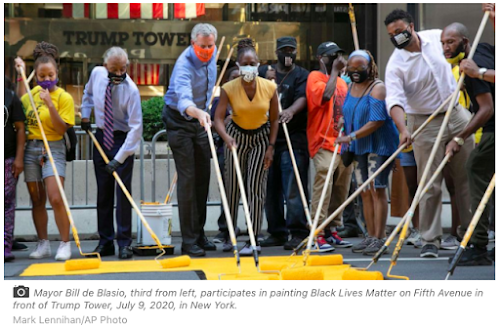 Think for a moment what the reaction would be if a Republican mayor painted "Right to Life" or "Life Begins At Conception" on a city street?
The reality might be worse that that right now. You can almost guarantee that there would be massive protests if any Mayor decided to paint an American flag and "God Bless America" on a public street.
What I find interesting is, that despite the fact that Blacks have been reliably voting for Democrats for over 80 years, the Black Lives Matter protests seem to suggest that it has not gotten them anywhere.
Democrats have controlled almost all of the cities where the protests have been the largest for most of those 80 years. Why is that?
When you see what Joe Biden said in his interview it becomes pretty clear. The Democrats have counted on the Black vote for a long time. They act as if getting that vote is an accepted fact and right. The Democrats have always talked a good game, especially around election time. It just seems as if nothing changes between elections.
Recent polling suggests that more and more Black voters are starting to look at their choices more critically.
For example, a recent Rasmussen poll showed that President Trump has 37% approval with likely Black voters. Even more interesting is the fact that his approval was at 20% the day the BLM protests started after the George Floyd homicide. 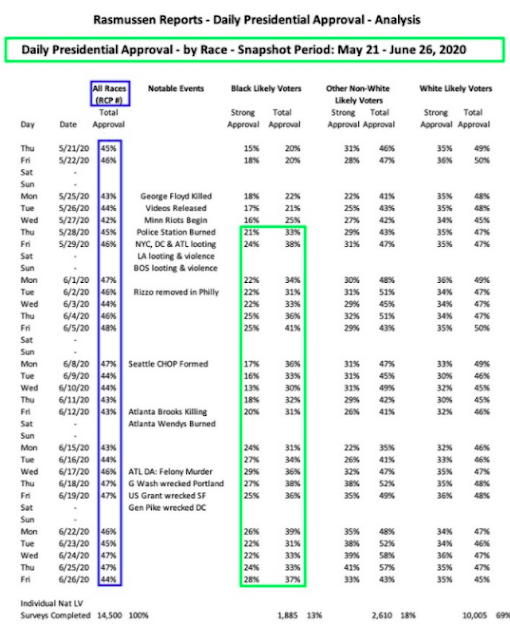 From those numbers it appears to me that there are a lot of Black voters who may not be in agreement with the radical BLM agenda.
Approval ratings do not necessarily translate to votes but if only a fraction of Black votes switch to Trump in 2020 it would be disastrous for the Democrats.
That is why you can expect Democrats to do all they can to fan the flames of racial division from now until election day. They absolutely, positively cannot survive without the Black vote.
The Democrats are so dependent on the Black vote today that they have literally rewritten history in order to mislead Black voters.
This is how the Democrats begin describing the history of the party on their website.
"For more than 200 years, our party has led the fight for civil rights..." 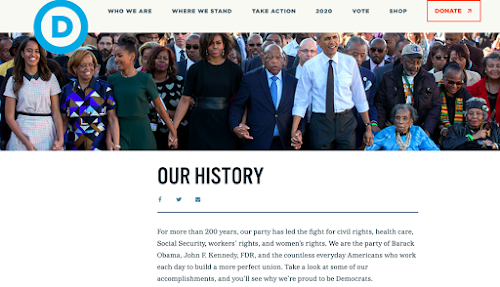 Has there ever been a bigger revision of history written anywhere that compares with that statement?
For example, Democrats have historically traced the lineage of the party most directly to two former Presidents---Thomas Jefferson and Andrew Jackson.
In fact, for years and years, the annual fundraising dinners for the Democrat party around the country were named Jefferson-Jackson dinners.
Yes, these are two of the men that the BLM protestors are trying to expunge from our history right now because they once owned slaves.
Here is Senator Barack Obama speaking at the Jefferson-Jackson dinner in Virginia in 2008. 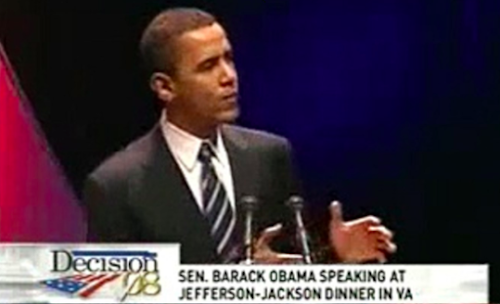 In that the BLM protestors want to expunge so much American history I can't help but wonder why the Democrat party itself has not come under attack? How can that name survive considering the history?
Has anyone also considered that almost all of these men have been under some type of attack recently? 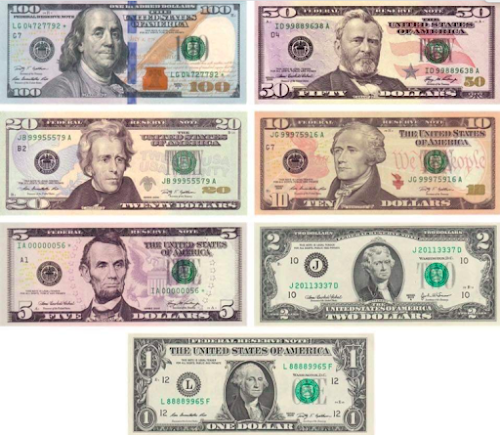 BeeLine would be happy to assist anyone who would like to rid themselves of any reminder of these reprobates.
Is it merely a coincidence that we seem to see these racial divisions being stoked up every four years about this time? I recently came across the blog post below that I wrote in 2016 about the history of the Democrat party.
I even wrote this paragraph at that time. You could not tell that I did not write these exact words today.

The political reality is that there is no viable Democrat party today without African American votes. That is why you don't see many Democrats criticizing the Black Lives Matter movement and our nation's police officers getting so little support from within the Democrat party.

Learn something about the origins and history of the Democrat and Republican parties and which party really led the the fight for civil rights.
Pass it on to someone who might benefit from a History lesson.
200 Years of History?
(originally published August 8, 2016)
This is the way the Democrat party begins a description of its history on the DNC website...

"For more than 200 years, our party has led the fight for civil rights..."

That might be persuasive to a potential voter who has never opened a History textbook but it bears no resemblance to the truth.

Democrats would like for everyone to believe (especially African American voters) that Democrats have been the champion of civil rights and liberties for over two centuries all the while battling vile racist Republicans. In reality, the historical record shows exactly opposite.

The Republican Party was actually founded in 1854 as an oppositional force to the pro-slavery Democrat Party specifically to prevent the further spread of slavery into the western territories. Six years later Abraham Lincoln became the first Republican elected President and he brought with him both houses of Congress. With the Democrats outnumbered in Congress, and Lincoln in The White House, the southern states made the decision to secede from the union as they foresaw that slavery would inevitably be banned at the federal level with Republicans in control.

The votes of Republicans and Democrats on the major legislative votes involving civil rights over the years says it all.


14th Amendment-Provided full citizenships to slaves
Not one Democrat in the House or Senate voted for the amendment.


15th Amendment-Provided voting rights to slaves
There was not a single vote of the 56 Democrats in the House or Senate that voted for the amendment.

The first Black U.S. Senator was a Republican (Hiram Revels from Mississippi in 1870). The first Democrat did not enter the U.S. Senate until 1993 (Carol Moseley Braun of Illinois).

In the U.S. House of Representatives, there were 21 Black members elected to Congress before there was the first Democrat elected in 1935.

You might look at these votes and Black Republican officeholders and consider this ancient history (even though the Democrats state that their fight for Civil Rights goes back 200 years) and discount this truth.

However, Robert Rohlfing in an article "Some Of The Lost History Of The Civil Rights Movement" in Canada Free Press points out this fact on more recent history,

Who was one of the Democrats who opposed that bill?

A name you might recognize is Senator John F. Kennedy of Massachusetts.

Kennedy later did become an advocate for civil rights legislation when he became President and introduced what later became the first version of the Civil Rights Act of 1964 that Lyndon Johnson pushed through Congress. Do you think JFK opposed the bill because he knew he needed Southern Democrats if he hoped to run for President in 1960? That would be my guess.

Turning to his Kennedy's running mate in 1960, Johnson opposed every civil rights bill for his first 20 years in Congress (1937-1957) before he got firmly behind the Civil Rights Act of 1964 soon after becoming President upon Kennedy's assassination. Of course, let it also be remembered that 80% of the no votes for that legislation were Democrats.

It would be nice to believe that Kennedy, Johnson and other Democrats changed their views out of character, conscience or conviction but with politicians you never really know. Politics and popular votes trump principles most of the time.

For example, LBJ is quoted by Ronald Kessler in his book, Inside the White House: The Hidden Lives of the Modern Presidents and the Secrets of the World's Most Powerful Institution, published in 1995 as telling two unnamed governors who were on Air Force One why he was working for passage of the Civil Rights Act, of 1964,

"I'll have them ni**ers voting Democratic for two hundred years."

Some argue that there is not enough proof to support that Johnson ever said this, however, it would seem to be in keeping with some of his other views on race over the years.

Democrats may ultimately get the Black vote for 200 years but it will not be based on the past 200 years of history.

The political reality is that there is no viable Democrat party today without African American votes. That is why you don't see many Democrats criticizing the Black Lives Matter movement and our nation's police officers getting so little support from within the Democrat party.

The same mentality drives the Democrats on the immigration issue. Given a choice between supporting an American citizen or an illegal immigrant, or our nation's security and an Islamic refugee, the Democrats are looking for future votes and little more.

It is a dangerous game. I only hope we have a country that survives those votes over the next 200 years.
Posted by BeeLine at 10:32 PM