A term has developed on Twitter to refer to much of the current media reporting about the Covid-19 pandemic.

This usually involves a sensational headline or statistic that seems as if it is intended to instill panic about the pandemic.

As an example, consider the local radio report I heard the other day about the imposition of a mandatory face mask order in an adjoining county to me.

This is in a county of over 200,000 people. If that rate continues for the rest of this year it would amount to 1,575 cases. That is less than 1% of the population of the county.

This chart from Johns Hopkins puts this issue in perspective.

The United States is conducting many more tests per capita than any other country in the world. Despite this fact, the percentage of positive tests is still towards the lower end of the positivity range compared to many countries.

Over the last three days, the reported number of tests for Covid-19 in the United States averaged about 720,000 per day. Since March more than 40 million Covid-19 tests have been conducted.

How many tests do you think are conducted annually for the seasonal flu?

You might be surprised to learn that less than 900,000 tests are conducted each year for the flu.

In other words, we are now conducting almost as many tests for Covid-19 in a single day as we do for the seasonal flu in an entire year.

Do you think if we tested as widely for the seasonal flu, and published the results every day, that we might have a different perspective on the risks represented to us from that virus?

Another fact that is not being reported is that many of the tests being conducted are repeat tests on the same individual. Therefore, if a person has a positive test and is diagnosed with Covid-19 they are often monitored and tested after their symptoms are gone.  Repeat testing is done on that individual to see if they still are testing positive to determine if the virus is still present in their system. This is often important to get a release to go back to work or to leave quarantine.

Therefore, it is possible that one person infected with Covid-19 might be reported as 3, 5 or 10 positive cases. I saw one report of someone in the hospital for another health reason had tested positive over 50 times for the virus but did not present any symptoms the entire time.

Consider the extensive testing that is being done on the PGA Tour. Every player and official is tested several times per week. A positive result means the player must be immediately quarantined and can no longer play. Thus far, I believe five players have tested positive for Covid-19.

However, three of those players played this past week in Columbus, Ohio despite the fact that they are still testing positive for the virus after numerous tests.

How can that be?

This is how the PGA Tour explained  that the three players with positive tests could play this week.


The TOUR’s medical advisors and the CDC have indicated that polymerise chain reaction (PCR) tests have shown a possibility of detecting viral RNA even after the infectious virus is no longer present. This would potentially become a persistent positive test result, despite the individual not being contagious.

The PGA Tour's medical director explained it this way.

“As time passes and as symptoms resolve and the patient or individual doesn't have any fever and 10 days have passed, at that point the thought and theory is that this virus, this particle that's being detected in the nasopharyngeal swab, is no longer active or contagious or can potentially cause ongoing infection.

"What we have learned along the way is that in some instances, individuals can continue to test positive for weeks if not months beyond when their illness started, and the thought is that those individuals are no longer contagious, but you're picking up dead virus. … They are not presumed to be contagious at that point.”

Therefore, following CDC guidelines, the PGA Tour is allowing its players "to return to competition after a period of 10 days of self‑isolation from the point where symptoms originated and has no period of fever for at least 72 hours prior to that point” even when they test postive.

You can assume this scenario is playing out with a lot of other people who have tested positive and want to return to work.

Could it be that these additional positive tests are also being lumped in with all the other positive tests with the result that the overall positivity rate for the country is being artificially inflated?

Florida claims that is not the case in its reporting but I don't know if that is the case everywhere. I would doubt that the reporting is that solid in all cases.

I am not suggesting there is anything sinister about this. The problem is undoubtedly logistics. Labs are not spending the time matching results to individuals when they report their results to public health authorities. They are merely reporting positive and negative test results on the tests done.

Analysis of CDC data on deaths shows that many deaths being reported actually relate to deaths that occurred much earlier than the reported date.

This lag effect in data reporting deaths is always a factor but it seems that it has intensified recently.

Kyle Lamb did an analysis of CDC reported deaths (which is what the media picks up in reports) compared to the actual dates of death.

This chart shows the CDC reported deaths in each week and then shows the actual week of death. There is a natural lag in reporting but most deaths are captured within a few weeks.

The next chart is another way to look at the same data which includes an adjustment for what the final CDC numbers will look like when adjusted for the lag effect.

The yellow line shows tracks what were the final deaths in the past and what is predicted for the future as lags in reporting data are completed. See how much higher that yellow line is compared to the original reported deaths (blue bars) in the early months? And how it is lower in the later weeks?

There is a lot going on in that chart but the trend is unmistakable. Deaths are declining significantly even though confirmed cases have increased.

As I have written, it is only natural that there would be some increase in cases coming off the lockdowns.

However, the data does not seem to support that is the only reason.

For example, Florida started its reopening on May 4 which included dine-in restaurants and there was almost no change in cases until after June 1. Stand-alone bars were opened June 1.

In the meantime, there were also a lot of BLM protests beginning in the last week of May.

Was it the bars or protests which fueled the increase in cases?

It might be a combination of the two. Look at the age breakdown of the new cases reported in Florida on 7/11.

Only 10% of those age 65 and older now make up the new cases. This group made up the majority of cases a couple of months ago.

You see a similar case pattern in Texas that opened earlier, and more broadly, than Florida.

The number of cases was remarkably steady through all of the reopenings during the month of May. Cases then started climbing in the two weeks after June 1. They started rising dramatically after June 15.

By comparison, here is the same graphic for California which has had some of the harshest lockdown measures in place from the beginning.


It is also interesting that California put in a mandatory mask rule on June 18.

It has been almost a month since that mask rule went into effect. Is there any evidence it is providing a benefit thus far?

Much has been learned and much more is yet to be learned.

The most important step you can take is to understand the nature of the disease and its risks to you and yours to the greatest extent possible. That is what I have endeavored to provide you from the beginning in these pages.

One of the most interesting perspectives I have come across recently is an article that appeared in a Swiss magazine a month ago entitled "Coronavirus: Why Everyone Was Wrong".

It was written (in German) by Beda M Stadler who is the former director of the Institute for Immunology at the University of Bern, a biologist and professor emeritus. The article was recently translated into English so that might be a reason it did not get much attention before in this country.

I came across it in a tweet by Richard Grennel who was the former Ambassador to Germany as well as the Acting Director of National Intelligence to President Trump until recently. 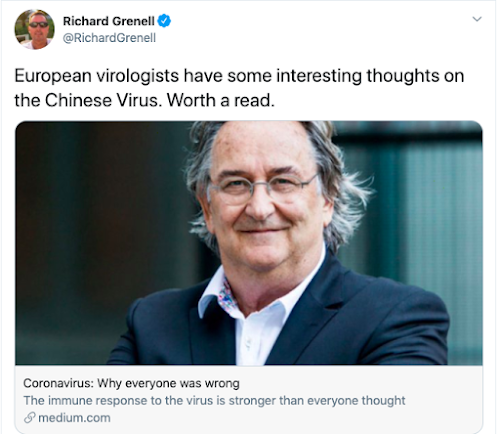 It is a fairly long article but why does Stadler believe everyone got it wrong (including himself) about Covid-19? He begins this way but you should read the article yourself if you want further perspective.

This is not an accusation, but a ruthless taking stock [of the current situation]. I could slap myself, because I looked at Sars-CoV2- way too long with panic. I am also somewhat annoyed with many of my immunology colleagues who so far have left the discussion about Covid-19 to virologist and epidemiologist. I feel it is time to criticise some of the main and completely wrong public statements about this virus.

The one point that Stadler seems to have missed on is his assertion that Covid-19, like other coronaviruses, would mutate and disappear in the summer heat. That has certainly proven true in Europe but why is the virus infecting the most people in the United States right now in states like Florida, Texas, Arizona and California. Why is Mexico a hot bed of cases?

Could it still be true that the heat has weakened the virus in these states such that we have not seen the hospitalizations and deaths that were experienced in the New York metro area?

For example, look at a comparison of the death totals in the New York metro area to those of Arizona, Florida and Texas thus far. Yes, it could get worse in the Sunbelt states but they have a long, long way to go to get close to what happened in New York, New Jersey and Connecticut.

As I said, there is still much to be learned. It has also been clear from the beginning, as Stadler points out, that the "experts" have proven that they often don't know more than anyone else when it comes to Covid-19.