Born in the USA

Last month I wrote about the Medicaid situation in California. In that post I cited the fact that 50% of the children in California are on Medicaid and half of the births in California last year were paid for by Medicaid.

The obvious question is how has a welfare program for low income individuals, that did not even exist until 1965, come to cover half of the children in a state?


It seems that I was too harsh on California in that post.

I just came across this data on Medicaid births by state. It seems that California is just average when it comes to the percentage of births that are paid by Medicaid in the United States of America.

In fact, in 24 out of the nation's 50 states, at least half of the babies born during the latest year of record were paid for by Medicaid. 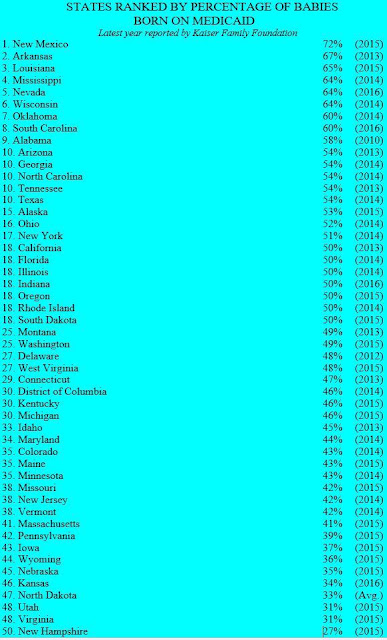 In New Mexico, almost 3 out of 4 babies are paid for by Medicaid to lead the nation in this ignoble ranking.

What surprised me was Wisconsin being tied for 4th place with 64% of its births being covered by Medicaid and Ohio with 52%. Those states beat out New York (51%) and California.

I return to the obvious question again.

How has a welfare program for low income individuals, that did not even exist until 1965, come to cover half of the births in our country?

And this question leads to other questions.

Is our economy so poor that half of the people having babies in this country are in poverty?

What effect is illegal immigration having on Medicaid? (If you look at the highest percentage states for Medicaid births they are generally states with high percentages of illegal immigrants).

Are the Medicaid eligibility requirements too broad?

Are poor people having that many more babies than those with more money?

Is the Medicaid program actually providing an incentive for the poor to have more babies since the rest of us our paying for it? My daughter just had a baby. She has good employer coverage but with a high deductible health plan it cost her and her husband more than $5,000 in out of pocket costs to have the child. Compare that to a Medicaid mother. Who is more likely to have the next child?

I don't have the answers to these questions but someone somewhere needs to be looking into the answers.

This is most particularly important right now considering the fact that Medicaid funding is so critical to the issue of repealing Obamacare. Without the massive expansion of Medicaid, the repeal of Obamacare would be infinitely simpler to do. As I have written before, it is not easy to take free stuff away from anyone. Any reform also creates winners and losers and the losers are always more vocal than the winners.

In fact, in 2008, before Obamacare expanded Medicaid, approximately 40% of births were already covered by Medicaid nationally. That number has grown dramatically to the one in two it is today.

You have to also keep in mind that each baby born and paid for by Medicaid is also more likely a child that will continue to be on Medicaid in the future until they are grown and are on their own. The sad reality is that they will more than likely also be on Medicaid as adults.

Such is the system we have created with all the best of intentions. However, we seem not to have considered the system of perverse incentives that perpetuates the problem.


I am tired of the questions. I would like some answers.