Unemployment has been falling. The stock market has been rising. Why are student loan defaults soaring?

There is an incredible $1.3 trillion in federal student loans outstanding owed by 43.4 million Americans.

To put that in perspective, there is about $1.1 trillion owed on auto loans and $1.0 trillion on credit cards according to the most recent Federal Reserve data. 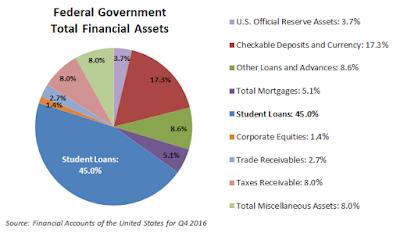 The growth of that "asset" was astronomical after 2010 when all student loans were put under the control of the federal government and all private lenders and banks were removed. 20 years ago it was negligible.

On $137 billion of current student loan debt, the borrower has not made a payment on the loan in the last 9 months which is the general rule used to consider the loan in default.

Generally, only about a third of student loans are being paid back on time. A recent study of the Federal Reserve Board of New York found that 10 years after graduation, an average of only 38% of the original balances on student loans had been repaid. A standard 10-year loan amortization schedule should have seen these loans all paid off.

Some other background on student loans from a recent report from the Consumer Federation of America.


How will these loans ever be paid back?

At the same time this report on student loans was coming out, I came across this story where Goldman Sachs estimates that there are over H-1B foreign workers in the United States filling jobs that require college educations. Goldman's number does not include another 470,000 foreign college graduates that are here on various temporary work visas according to a study by the Economic Policy Institute. Of course, every job filled by a foreign worker is one less job for an American college graduate who has to pay their student loan debt.

If Goldman’s estimate of almost one million H-1Bs is combined with the EPI’s estimate of various other skilled white-collar visa programs, then the government data shows that U.S. companies employ roughly 1.4 million lower-wage college-graduate temporary workers in the United States. The imported workers are not immigrants, citizens, legal residents or green card holders, but are supposed to return home after several years.

Companies have used them to fill enough outsourced jobs to fully employ nearly all Americans who graduated from college with skilled degrees in 2015 and 2016. This population of white-collar temporary workers has pushed many established U.S. workers out of jobs, partly because none of the visa programs require that Americans be hired before foreigners.

If those American college students took Economics in college and understand supply and demand, these numbers may explain why good jobs are harder to come by, the pay in those jobs is not as good as it should be and the student loans they have to pay loom larger and larger in their lives. 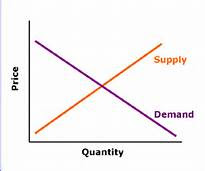 The irony is that a lot of the Millennials who are burdened with student debt loved Obama and can't stand Trump.

Blue collar voters finally got the message about what illegal immigration and one-sided trade agreements had done to their standard of living. They rejected the Democrats and voted for Trump in 2016.

When will the college-educated, student loan burdened Millennials realize that their future standard of living is just as much at risk due to ill-considered federal policies?

More importantly, when will the federal government realize that its student loan "assets" are at risk due to its own immigration policy?

Trump gets it. I am not sure how many more on Capitol Hill do. Without question, there is not one Democrat that does. Of course, when it all comes tumbling down they will have an answer.

They always have an answer having to do with someone else's money.
Posted by BeeLine at 7:13 PM