Mrs. BeeLine and I have reached a certain age and station in life that grandchildren are a frequent topic of conversation in our circle of friends and acquaintances.

Before we were grandparents we often heard friends proclaim things like, "My grandson is extremely advanced for his age" or "My 3-year granddaughter has an excellent singing voice" and chuckle to ourselves. Yeah, their grandkids must be from Lake Woebegon. They are all above average.

Of course, now that we are grandparents, we are now just as guilty as anyone else when talking about our grandchildren. However, we are careful to qualify all of our statements with something like this.

"We are not saying this just because he is our grandson, but Junior is very insightful for his age.

"Our granddaughter has extraordinary eye to hand coordination. You don't see many 2-year old kids who can catch a ball like that and I am not just saying that because she is ours."

It really is true that being a grandparent is the one thing in life that is probably vastly underrated.

Of course, as grandchildren enter your life, so does the question of what those future holders of our federal debt are going to call you.

I have noticed that among Baby Boomers it is decidedly out of the norm to just be old Grandma and Grandpa. Baby Boomer women in particular don't seem to want to be called Grandma. It might have been fine for their Grandmother but it is decidedly not cool for a toddler calling out to "Grandma" at the local store.

Mrs. BeeLine spent some time thinking about this topic before our first grandchild was born and decided that BeeBee would be a good name for her. She asked me what I wanted to be called. She was not pleased when I said "I don't care what he calls me. Grandpa is fine."

I was told I was no fun. I already knew that. After all, I write a blog that spends a lot of time on analyzing the problems in the world and in our nation. How much fun can I be?

Mrs. BeeLine ultimately decided that I would be called "BeeBop". She thought that was "fun" and went together well with BeeBee.

My reply was that she was probably right that the name for me made some sense from a 60 year old's perspective, but we were ultimately going to be dealing with a babbling 12 month old as the final arbiter. The kid was going to decide in the end whether he was going to put up with "BeeBop".

Four grandchildren later BeeBee has survived. When they visit our home they even refer to it as visiting the Beehive.

However, BeeBop was not so lucky. As I predicted, our first grandson had other ideas on what he was going to call me. BeeBop might have been suggested to him but what came out of his mouth was BubBub.

NO. I am not a Bubba. I am a BubBub. Of course, that has already been shortened by the oldest grandchild to Bub. BeeBee is sometimes called Beeb.

What other grandparent names are out there? It seems the possible names are endless.

I hear  Nini, Nana, Nonna, Gigi, Mimi and Mamaw quite a bit among my grandmother friends.

There are still a few grandma and grandpa or gramms and gramps out there, but not nearly as many as there used to be.

It does make you wonder if we are coming to a point when someone in kindergarten refers to her grandma and all the other kids will not know who she is talking about?

What do you do if you want to come up with your own special grandparent name?

Grandparents.com actually has a list of hundreds of names for you to consider. It is even organized into categories---traditional, trendy, playful, international, celebrity.

As an example, here is the list of trendy grandmother names. 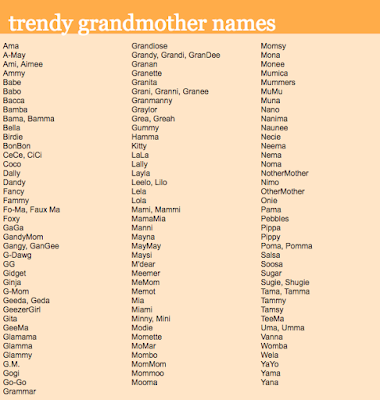 If you are really serious about it, you can buy "The New Grandparents Name Book" by Lin Welford. It even gives you ideas on how you can create a custom grandparent name just for yourself. 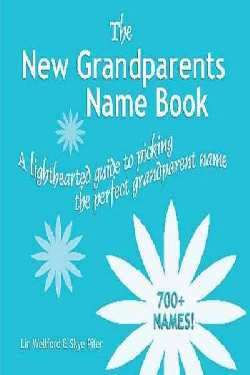 Mrs. BeeLine could have written that chapter on custom names. It seems that BeeBee is not on any of the lists of Grandma names that I have seen. She truly gave herself a custom name for the unique grandmother she is.

BubBub is not on the list either. Another custom name. However, my grandson came up with that one on his own.

Perhaps my grandson could have written that chapter as well.

Of course, I am not just saying that because I am his grandfather.