One of the most difficult things for human beings to do is to save for tomorrow.

We are hard wired to live for today. For most of our existence, that is just what we did. We set out in the morning to hunt and gather what we needed to survive for that day. We did not worry about tomorrow until tomorrow came.

This mindset was also reinforced by the limits of technology. Many things could not be easily stored. You used it as you acquired it. It was not until refrigeration was developed that it was possible to store many items for future use.

All of these limitations also made the older members of the tribe a potential liability to the group. If someone could not produce what they required to be sustained on a daily basis, it placed additional pressures on everyone else.

You worked until you dropped. Retirement was not an option. Therefore, it was not given a thought.

This was the reality of human existence for thousands and thousands of years. It is hard to break brain patterns that evolved over that length of time.

It was not until the 20th century that retirement was seriously considered. Of course, since it was evident that voluntary saving would be difficult for most people to accomplish, retirement saving was done for them. Employers initiated pension plans and put money away for employees with the promise of a monthly payment after they retired. Social Security followed a similar model which taxed employee wages with both employer and employee paying equal rates with the promise of a defined benefit in retirement

It was not until the 1970's that defined contributions plans started to gain attention. It is now the principal means for private sector employees to plan for retirement beyond Social Security. Why did this occur? Employers simply did not want to continue to carry the risk of promising a fixed future income benefit in retirement to employees. In a pension plan, if financial returns do not meet expectations, the employer must make up the shortfall. Employers shift that risk to employees with a defined contribution plan.

Of course, the shift to defined contribution plans was not all bad for employees. Any excess investment gains inure to the benefit of the employee. In addition, a defined contribution plan is also portable. The assets are yours so if you change jobs (which more and more employees did beginning in the 1980's) they benefited from the portability features in those plans.

For those employees who put money away for retirement beginning in the late 1970's and 1980's, who are retiring today, there has never been a better period to build wealth. It was difficult to lose no matter if you invested in stocks or bonds over the last 35 years.

Stocks (as measured by the S&P 500) have advanced at an average annual compound growth rate of 11.4%. An investment in ten year T-Bonds has compounded at 7.7%. These are both well above the average returns for the period 1928-2016 which has seen average stock returns of 9.5% and bonds 4.9%. (All data from Stern.NYU.edu datasets.) 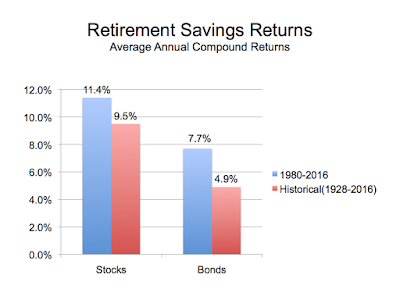 Therefore, if retirement investors have had such favorable tailwinds at their backs why do most Baby Boomers have such paltry retirement nest eggs?

They simply have not saved anything close to what they should have saved. See discussion above for why that is.

This chart gives you an idea of how little most Boomers have saved for retirement.

To put those numbers in context, a middle income worker who is retiring will generally need approximately ten times their final income while working (in addition to the Social Security they will receive) in financial assets in order to be reasonably confident they will not run out of money during retirement.

Higher income earners will need a considerably higher amount of retirement assets in that Social Security will replace less of their final income. 15 times final income is a more reasonable target.

If you think 10 or 15 times your pay in savings sounds like a lot, consider the fact that those savings may have to sustain you for 20, 25 or 30 years in retirement based on current life expectancies.

As sobering as these numbers are, the future looks far, far bleaker for the children of those Baby Boomers who are now planning for their retirement. A recent research paper in the Journal of Financial Planning by David Blanchette, Michael Finke and Wade Pfau titled "Planning for a More Expensive Retirement" shows that the tailwinds that Boomers had for retirement planning is turning into severe headwinds for Generation X-ers and Millennials.

Those headwinds are principally caused by how expensive stock and bond prices are today compared to their historical averages and will likely be further exacerbated by increasing life spans.


It is substantially more expensive to buy investment income in the modern era than it was in the past. What is most unusual about asset prices in the 21st century is the simultaneous high valuations on risky assets and low yields on safe assets. Safe asset prices were near the low yields of 2016 in a number of historical periods, but these were generally associated with a flight to safety from risky assets (and low price/earnings ratios on these risky assets). The high prices of both stocks and bonds in 2016 are a historical anomaly that is consistent with increased demand for all financial instruments.


What does this mean for those planning retirements today?

You need to save enormous sums of money to meet any realistic retirement goals because investment returns simply cannot be counted on to provide the same boost to retirement assets as they have in the past.

Of course, as we have seen from the discussion above, Baby Boomers have not met those goals despite having the advantage of outsized investment returns. They did not save enough. How much saving is going to be required according to the researchers in the low return environment we find ourselves in today?

Roughly speaking, the retirement savings rate would need to almost double over what historical returns would suggest are target savings goals. 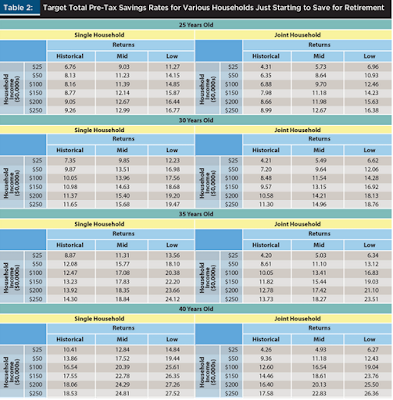 Of course, these same individuals are paying off student loans, trying to save for home purchases and beginning to take care of children who like to eat and have clothes on their backs.

The next two generations have a very, tall challenge in front of them with theses additional retirement savings requirements while also paying the future taxes that will be required to make interest payments on $20 trillion of federal debt as well as funding the Social Security and Medicare of their parents.

Their parents could not come anywhere close to what they needed to save. How will these younger generations do it?

I have no idea other than save, save and save some more.

Saving is not in our nature. However, in the world we live in today there is little choice

Tomorrow will be here before you know it.