A people without the knowledge of their past history, origin and culture is like a tree without roots.


If this is true, then we have many trees without roots today when talking about the history of the U.S. federal budget.

President Trump and OMB Director Mick Mulvaney recently released their proposed outline for the 2018 federal budget which includes plans for $1.1 trillion in spending in the next fiscal year. And that is just for what is called discretionary spending.

Yes, that is $1,100,000,000,000 of your tax dollars and borrowed money that is being proposed to be spent on so-called "discretionary" items like Defense, highways and roads, the FBI and other things. That is only 30% of the federal budget. The other 70% is considered mandatory non-discretionary spending which includes Social Security, Medicare, Medicaid and interest on the federal debt. Trump has not proposed touching even one cent of this.

However, to hear and read the reaction from liberals, the mainstream media and, even some Republicans, you would think the world is coming to an end because of proposed cuts to the State Department budget, the EPA, the Corporation for Public Broadcasting and the National Endowment for the Arts. It doesn't matter what it is, there is never enough money when it comes to federal spending.

Therefore, I thought it might be appropriate to provide a little context on the federal budget for those less rooted in its history.

Fortunately, I came across an excellent visual history of the federal budget that was done last year by Max Galka on metrocsom.com.

Let's start with spending. From our nation's founding until the middle of the 20th century (a span of over 150 years of our country's history) annual spending generally never exceeded 10% of GDP except in the case of war. Until FDR brought us the "New Deal", spending was actually pretty consistently around 3% per year. 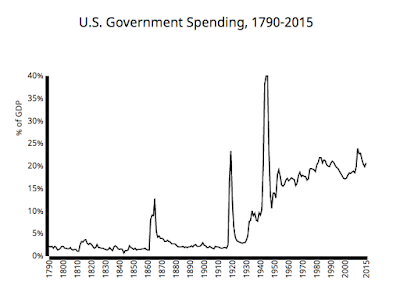 The following chart shows where that money has been spent. There was practically no money spent on entitlement programs like Social Security, Medicare and Medicaid until 1950. These items now account for over one-half of federal spending.

In addition, until 1930, all government non-defense expenditures amounted to less than 1% per year. That number today is about five times as large. We somehow survived without a massive federal bureaucracy or funding for NPR, the National Endowment for the Arts and a host of other programs. 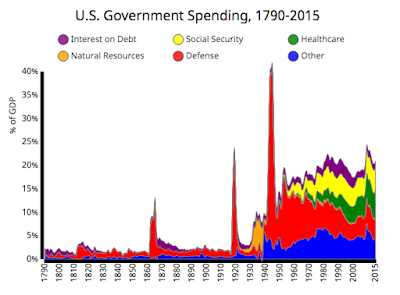 For most of our history, 3/4 of all federal spending went to just pay for defense and interest on the federal debt. 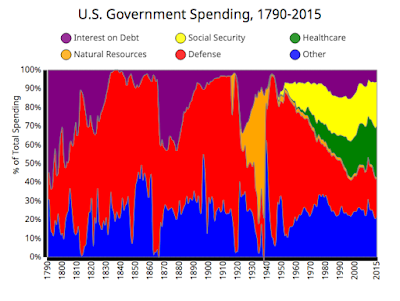 Although there is a lot of talk about our $20 trillion of federal debt, a surprisingly small part of the budget today is going to pay interest on that debt due to historically low interest rates. However, as interest rates rise in the future (and they will) , you can readily see from this chart how other items in the budget are going to be at significant risk (or future taxes will need to be increased).

Speaking of the federal debt, this chart shows debt as a percentage of GDP.  Historically, debt was taken on to finance wars (including our War of Independence). It then gradually receded in subsequent years. However, beginning in 1980, we started to consistently live beyond our willingness to pay for it currently. 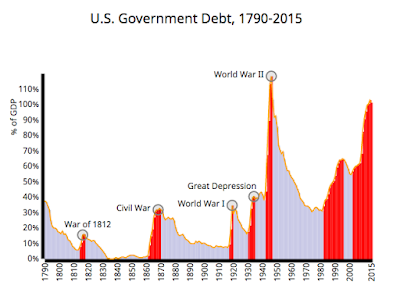 The current trend is unsustainable and never could have occurred but for the low interest rate environment we have been in. It will end. The only question is how much pain will accompany the end of this trend. It is guaranteed to hurt someone, and most likely everyone.

Let's turn our attention to the revenue side of the budget.

Just as all of the debt we have taken on could not have been accommodated without declining interest rates since 1980, spending would not have exploded without vast increases in federal revenues.

The engine for those revenues has by and large come from the federal income tax that was not adopted until 1913 and did not really become a major revenue source until World War II. Today personal income and FICA taxes account for 80% of all federal revenues. The corporate income tax represents 11% of federal revenues. 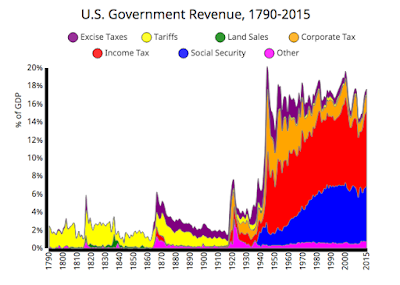 Despite all the angst you hear about Trump's potential border-adjustable tax proposal, it is interesting that the United States relied almost exclusively on tariffs and excise taxes for revenues for its first 130 years. 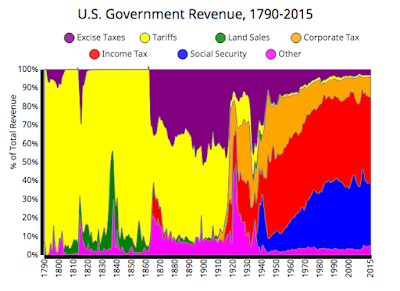 This might explain why President Trump signed a bill authorizing $19.5 billion in NASA spending that will provide continued support of launches by commercial companies and deep space exploration, as well as the International Space Station and initial planning for a Mars mission.

Perhaps if we can get to Mars and claim the planet as our own, the federal government could then sell off the land much as we did in the 1800's land rush west.

Failing this, we can expect many tough choices ahead of us in future budget discussions. Whether Bert and Ernie continue to get taxpayer support will be child's play compared to some of the tough questions I see lying ahead of us. (By the way, PBS only gets 15% of its budget from the Center from Public Broadcasting although the Democrats make it seem as if the proposed cuts by Trump would decimate Sesame Street and PBS).

These charts should provide a little better perspective and context about our budget history as well as hinting at a few of the challenges lying ahead to balance the budget and pay our debts.

Consider yourself now firmly rooted in the history of the budget of the United States of America.
Posted by BeeLine at 6:19 PM