Grant was actually one year younger than Barack Obama was when he took the oath of office as President. He was also younger when he took office than Paul Ryan is today.

That is pretty incredible when you think about it. One of the reasons that Grant seems like he was so much older is that he had effectively lived four lifetimes before he ever became President. Grant had literally seen it all in both his personal experiences and in the decisions he had to make as a leader.

Comparing the life experiences of a Paul Ryan or Obama to Grant would be like comparing a 6-year playing T-Ball to Mike Trout.

Paul Ryan has it hard because he has to figure out a way to repeal and replace Obamacare?

Compare that to what Grant's responsibilities were at Shiloh, Vicksburg, the Battle of the Wilderness or Petersburg.

Barack Obama saved us all from another Great Depression?

Compare that to what Grant did in the aftermath of the Panic of 1873 in standing up to the bankers and bureaucrats.

It is worth reading again.

I just finished reading Jean Edward Smith's biography of Ulysses S. Grant.  He was a remarkable man. There is little doubt that if it were not for Grant and Lincoln we most likely would not have saved the Union. Grant was also a very underrated President. 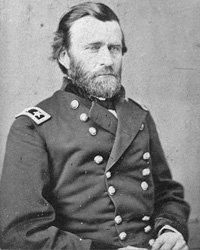 What struck me most in reading the book were the vast differences in life experiences when comparing Barack Obama to U.S. Grant before they were elected President of the United States.  Grant was actually one year younger (age 46) than Obama when he took office.  However, Grant seemed to have had three lifetimes of experiences before he ever set foot in the White House.

Born in Point Pleasant, Ohio in 1822, from an early age Grant had an enduring affinity for horses. He had an uncanny ability to train horses and his riding skills were unsurpassed.  When he was at West Point he was considered one of the greatest riders ever at the Academy. It was about the only area in which he excelled at the U.S Military Academy.  He finished 21st among 39 who graduated in 1843.  He ranked 28th in infantry tactics.

He saw combat in the Mexican-American War in which he was away from home (and his fiance, Julia) for almost three years. He married Julia in 1848 and stayed in the Army only to be ordered to California in 1852. Julia was 8 months pregnant with their second child and could not make the long trip to San Francisco which entailed a steamship voyage from New York to Panama, an overland trek across Panama and another steamer to San Francisco.

700 soldiers and their dependents embarked on the journey but only about half made it to San Francisco two months after they left New York.  A cholera epidemic ravaged the group as it transgressed Panama. All twenty children younger than three died on the journey. While most of the orderlies refused to care for the sick because of their fear of contracting the disease themselves, it was Grant who undertook the nursing of the ill himself.

Grant spent another two years in California without his wife and family. In his spare time he dabbled in numerous side business ventures attempting to make enough money to bring his young family to live with him. The California Gold Rush was in full swing and everyone seemed to be cashing in on the action in some way. Everyone but Grant.

Grant lost money on almost every venture he attempted. His loneliness and bad luck eventually led him to rely too much on the bottle.  He resigned his officer's commission (many speculate he was forced to resign because he was drinking on duty) and headed home without enough money in his pocket to make the entire trip home to St. Louis which entailed retracing his previous path across Panama and by ship to New York.

He arrived in New York City with no money, and not even sure that his wife would want him to return to her parent's home in St. Louis.  He borrowed money from an old friend to pay his hotel bill in New York and waited to hear from Julia.  He eventually had to ask his father for the train fare home and a letter arrived from his wife welcoming him home with open arms.

Grant was 32 years of age when he left the Army. He spent the next four years working a 60 acre farm near St. Louis on land that his wife had received from her father as a wedding present. He never succeeded at farming.  Most of the money he made was selling cords of wood he would cart into St. Louis. He eventually had to look for work in St. Louis. He tried real estate and other jobs but he was not successful in any endeavor in the world of commerce.  He could not afford to have his family with him in the city and lived in a boarding house during the week. He walked twelve miles on Saturdays to see his wife and children and walked twelve miles back to St. Louis each Sunday.

In 1860, at age 38, he eventually faced the inevitable, swallowed his pride, and asked his father for a job. His father had a leather business that had prospered over the years and he operated a half dozen retail outlets in the upper Mississippi River valley.  He gave Ulysses a job as a billing clerk and collection agent in his Galena, Illinois store.  Grant moved to Galena about one year before the start of the Civil War.

With this background you begin to see how incredible the story of Ulysses S. Grant is. Within four years of his move to Galena to take a job as a billing clerk, he was General of the Union Army. Within eight years he was President of the United States.

What made Grant successful?  First, he was not afraid to engage.  Except for Grant, most of the Union's field commanders were unwilling or unable to take the fight to the enemy. Grant knew that to win you had to be on the offensive.  Second, he led from the front and was cool under fire.  He took reversals in stride and often looked to take a disadvantage and turn it into an advantage.  Third, he was unassuming, honest and considerate.  Grant always put his country and men first.  He was as honest as they come and he always treated his enemies with the utmost of respect.

It is indeed sobering to read about the life and times of Grant and compare that life and experience to Barack Obama and other political leaders of today.  Men like Grant were tested in ways and manners so far removed than what we have in our leaders today that it is no wonder we find us where we are today.  We can't maneuver around a fiscal cliff?   What is that compared to the Battle of Shiloh or Vicksburg?

I found it particularly interesting how Grant responded to the Panic of 1873 in his second term as President.  By the way, when Grant was nominated by the Republicans for President in 1868 he gave but one speech-his acceptance of the nomination-of which he principally just focused on one theme, "Let us have peace".  He conducted no campaign as such.  Similarly, in his reelection bid in 1872 he also never campaigned.  How times have changed!

The Panic of 1873 was caused by "an insatiable desire for money that spawned a speculative boom that skyrocketed out of control.  Banks had lent money recklessly and brokerage houses had marketed securities that were often worthless", according to Smith in the Grant biography.  Does that sound familiar?

In 1873 Wall Street financial institutions started to fall like dominoes.  Grant soon came under pressure from Washington politicians to inflate the currency.  People were hurting as bankruptcies and unemployment soon followed as businesses, farms and factories were lost.  Congress felt that pumping more paper money into the system would solve the problems.  Again, does that sound familiar?


Grant was torn.  Having suffered in the Panic of 1857-that was the Christmas the president had pawned his gold watch to buy presents for his family-he sympathized with the nation's farmers and small businessmen.  Grant knew what it meant to be poor, to try to make a crop, to have a business fail, to be out of a job, and as a last resort to peddle firewood on a St. Louis street corner.  His heart was responsive to those who wanted to pump more money into the economy, yet as president he felt his responsibility was to the nation's future.  Cheap paper money might look like a panacea, but inflation was never a friend to stable government.  The United States would be driven from the world standard, the return to specie-backed currency would be set back, property values would be unsettled, and speculation rekindled.  If Congress could simply print unredeemable paper money to appease popular demand, the nation was in peril.

Congress passed a bill to greatly increase the nation's money supply (this was before the creation of the Federal Reserve). Grant then had to decide whether to sign the bill into law or use his veto
power.

He initially decided to approve the measure bending to the political pressures but as he wrote down his rationale he determined that his reasoning was fallacious.  He vetoed the bill much to the shock and anger of his Cabinet and the Congress.  His veto was upheld and the nation soon moved solidly behind Grant's call for sound money and a stable currency.  The gold standard was resumed shortly thereafter that paved the way for the enormous growth of the U.S. economy in the last quarter of the 19th Century.  By 1900, the U.S. dollar had replaced all other currencies as the international symbol of financial stability.