Did Hillary Clinton lose the Presidential election because she was a woman?

Did her sex help her or hurt her?

What about Donald Trump's direct, brash and assertive style? Could a woman act that way and win?

What about substance? How could a man with supposedly no substance defeat a woman who supposedly had so much of it?

These are questions that political scientists and pundits have been asking since Donald Trump defeated Hillary.

I came across two recent studies that looked at these questions and which provide some interesting insights on why Trump won.

She pictured an actress playing Trump, replicating his words, gestures, body language, and tone verbatim, while an actor took on Clinton’s role in the same way. What would the experiment reveal about male and female communication styles, and the differing standards by which we unconsciously judge them?

Guadalupe reached out to Joe Salvatore, a Steinhardt clinical associate professor of educational theatre who specializes in ethnodrama—a method of adapting interviews, field notes, journal entries, and other print and media artifacts into a script to be performed as a play. Together, they developed Her Opponent, a production featuring actors performing excerpts from each of the three debates exactly as they happened—but with the genders switched. Salvatore cast fellow educational theatre faculty Rachel Whorton to play “Brenda King,” a female version of Trump, and Daryl Embry to play “Jonathan Gordon,” a male version of Hillary Clinton, and coached them as they learned the candidates’ words and gestures.


The assumption going in was that Trump's aggressive, arrogant style would never be tolerated in someone of the fairer sex. Further, Clinton's substance and preparedness would be even more convincing in a man.

The ethnodrama was performed on January 28 in front of two standing room audiences in Washington before what were audiences drawn from academic circles. Based on the audience, you can guess the political leanings and biases that came with them to the performance.

The real surprise at the end of the evening was that the expectations the audience brought with them that night were totally upended. Many came to realize why Donald Trump won. "Trump" was more authentic, more likeable and connected themes betters with the audience. "Clinton" was plastic, all her responses seemed staged and rehearsed, and there really was not much substance at all in "her" answers.

Many were shocked to find that they couldn’t seem to find in Jonathan Gordon what they had admired in Hillary Clinton—or that Brenda King’s clever tactics seemed to shine in moments where they’d remembered Donald Trump flailing or lashing out. For those Clinton voters trying to make sense of the loss, it was by turns bewildering and instructive, raising as many questions about gender performance and effects of sexism as it answered.


Read a summary of the whole study as reported at NYU.edu. It says a lot, in particular about the way we all alter facts in order to conform them to our own biases. For many, Trump was a total buffoon with no substance, no style and was a horrible man to boot before he ever entered the race. Therefore, they saw nothing beyond that as the campaign unfolded. On the other hand, Hillary could do no wrong. She was the smartest, most qualified, woman of substance to ever walk the earth. They could not see her obvious shortfalls when they were in plan sight.

Strip away the woman part and there ere was not much left of Hillary to appeal to voters.

Repackage Trump as a woman and he seemed to become much more insightful, intelligent and interesting.

A complete reversal of the expectations the researchers had before conducting the study.


You can view a video excerpt of one of the rehearsals here to see it for yourself.


The second study is from the Wesleyan University Media Project which measured the extent each Presidential candidate spent on discussions on policy in their advertising messaging.

The conclusion of the study was that the 2016 Presidential race featured  "one candidate who almost ignored discussions of policy." In other words, there was almost no substance in any of the advertising the candidate did to explain their policy positions.

Can you guess which candidate that was?

This is the chart the study used to demonstrate that "Clinton's campaign was devoid of discussions of policy in a way not seen in the previous four Presidential contests."  A picture is truly worth one thousand words when you look at the Clinton campaign compared to other Presidential election runs. 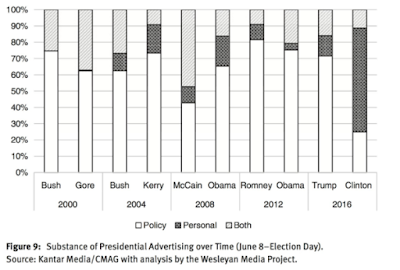 $845 million was spent on television advertising in the 2016 Presidential race, including the primaries, Clinton spent almost three times as much on advertising as Trump did. However, almost none of it explained anything about what Hillary Clinton would do as President. Almost everything she aired was a personal attack on Trump or an attempt to personalize her poor image. There was nothing of substance for voters to grasp on to with Hillary.

Compare that to Donald Trump where he was crystal clear on what his important policy positions were.

You can read the full report here.

It continues to confound and confuse me how the Democrats want to spend all their time trying to blame Russia for Hillary's loss when the answer is right in front of them. Style and substance matter a great deal to voters and Clinton had little of both. Being a woman was simply not enough. In fact, is it not ironic that Trump as a woman looks as if it would have delivered an even more devastating loss to Hillary.

And the Democrats are still talking about her as a candidate in for New York's mayoral race this year or the Presidency in 2020?

Is it any wonder the Democrats are in the position they are right now?
Posted by BeeLine at 9:19 PM